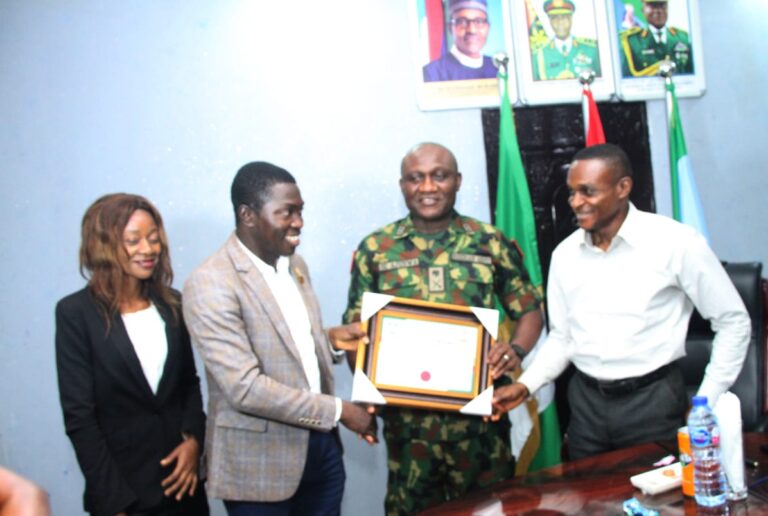 The General Officer Commanding 81 Division of the Nigerian Army, comprising Lagos and Ogun States, Major General Obinna Ajunwa, has warned against devaluing the military, saying that such action has a chain reaction, as it reverberates on the collective existence of the people, and affects what the country holds dear in terms of internal unity, national cohesion and international recognition.

Ajunwa made this remark while playing host to a cross section of the Executive members of the National Association of Online Security News Publishers (NAOSNP) in his office on Monday. The General noted that the army, and by extension the military, is the face of the nation, and by no means or circumstance should be rubbished, because an attack on the military through false reports is an attack on the very essence of the people and the nation itself.

“The Military is the face of the nation. If we rubbish it we are rublishing our face. The Army belongs to us as Nigerians. In the Nigeria society, and even elsewhere, the strength of the people is the military. And when the top is dropped, it will definitely affect the other component parts.

He maintained that the military will continue to strive to to keep the peace and security of the nation, while calling on the citizenry, especially the press to assist in the patriotic act through verified publications, and most importantly publications that has national security and interest as consideration

“False reports devalues the military, Nigeria and the people. Once you devalue the military, every other persons in the nation is devalued. Always endeavour to report correctly and avoid false information as it could destroy the nation and paint it in bad light, thereby giving a signal of negativity.

“We must understand that when a country’s military is tainted with negativity, it spiraled on other aspects of that country’s endeavours. That is why the military is the face of the nation, and must not be devalued,” Ajunwa said.

Earlier, the leader of the NAOSNP delegation and President of the Association, Mr. Samson Oki, has briefed the GOC and his team of officers on the need for the division to synergise with the Association to curb the initiation and spread of fake news, which is detrimental to the psyche and peaceful co-existence of Nigerians.

“It is our intention to cooperate with the military, and the army in particular to further engender military/media relationship to continue to fight the war against fake news, which is capable of causing mayhem, for the good of the people.

“Our Association is known for discipline, professionalism and dedication to the Nigerian project, and in the best position to understand that national interest supersedes parochial or personal interest, and that is what we have sworn to uphold,” Oki said.

READ MORE:  Lagos One Million March For Peter Obi: Rally Will Not Be Allowed At Lekki Toll Gate, Says Police

In his vote of thanks, the Public Relations Officer of NAOSNP, Mr. Eric Elezuo, appreciated the Nigeria Army for the job well done, which have remained their hallmark in recent times, and the GOC 81 Division, Ajunwa, who has been exemplary since he assumed office in August 2022.

“While partnering with you in this task of nation building and defence, we must acknowledge your success stories in the field and with the civil populace. The army has distinguished itself, and remained above board. We also acknowledge the giant strides Major Ajunwa has taken since he assumed duties about three months ago. We are not oblivious of these milestones, and ask that they be sustained,” Elezuo.