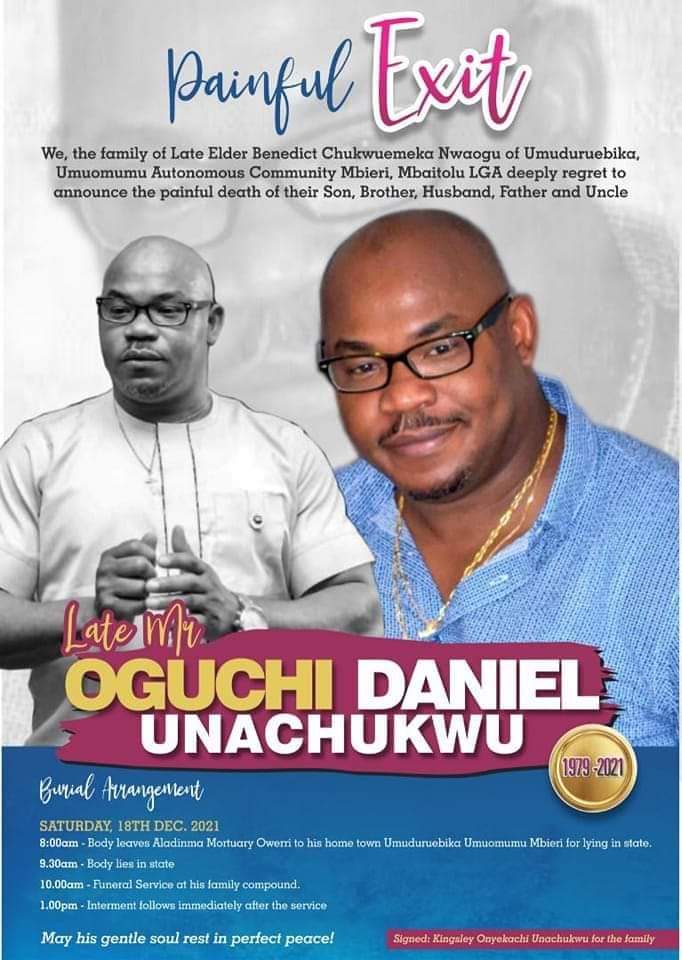 Today, Saturday, December 18, the people of Mbieri in Mbaitoli, will wake up to the reality that their son, Oguchi Daniel Unachukwu, has indeed been brutally murdered in Imo state. They will receive the corpse of the late Unachukwu and commit same to the grave. They will no longer see their beloved son, a successful man whose life was cut short at forty-two.

The late Unachukwu offended nobody. He committed no crime, unless it is now the case that to be an Imo person under the regime of Chief Hope Uzodinma has become a crime punishable by instant death.

Unachukwu, extremely intelligent, handsome, responsible, dedicated, productive, responsible and immensely talented, was murdered in cold blood on his way to the Sam Mbakwe Airport, Owerri. He had come home from Germany, and on his way back, he met his untimely death in the hands of suspected security operatives. After interrogating him at a checkpoint, the security personnel chose to unleash bullets on him as entered his car to drive off. They killed our innocent brother! They murdered a God-fearing family man and made his wife a widow and rendered his kids fatherless.

National security has become a threat to the security of nationals in Imo state!

The killing of an innocent person is such an abominable act that which the Heaven to rebel and moves the Earth to vengeance! The Koran even says, “He who kills an innocent, it’s as if he has killed all mankind”. Yet, ever since this very reprehensible, unacceptable and cruel murder occurred, the supposed governor of Imo state, Chief Hope Uzodinma, has done nothing to bring the perpetrators to book. He has done nothing to assuage the sorrows of the family, especially the grieving wife of the deceased. Chief Uzodinma, who took an oath to do justice to all manner of persons, has watched an Imo citizen unjustly murdered on the soil of Imo state by those whose uniforms were purchased, arms procured and salaries paid with the taxes contributed by the citizens without uttering a word of condemnation or a word of condolence.

All the efforts made by the family to take justice to the security operatives who killed Unachukwu have come to naught, as some powerful interests in the corridors of power have ensured that the culprits are shielded from the consequences of their heinous act.

Imo is now passing through a time that citizenship carries no value because government has abdicated its primary responsibility of protecting lives and property. Anyone can be killed by anyone else. It is now like an ungoverned space, like the Hobbesian pre-political state in which all claims are arbitrary and all rights are only powers. Crisis, strife, killings, arson and abductions are now rampant. But these atrocities never make Chief Uzodinma to budge. He is not moved at all! Corpses can litter Orlu or fire pouring down in Orsu, they cannot stop the Omuma-born chief from sipping his champagnes, cruising around Nigeria aboard chattered private jets and living large in Abuja.

Chief Uzodinma was even busy dancing and having fun at a stadium on the day that some traditional rulers were kidnapped and eventually killed in the most horrifying way. Weep for Imo state! To be sure, allowing citizens to be killed unaccountably is the most irresponsible thing any government could allow to happen. But this is the reality Imo people are now forced to live with.

Where is the conscience of the man whom Imo people are so unfortunate to have as governor? Which forces are in possession of his heart? Which coven has stolen his soul?

The experience of the late Unachukwu is the story of the vast majority of Imo youths who toil through all seasons for daily bread and move to faraway lands for greener pastures. Yet, while in Imo, the basest thing that the government owes them, which is their safety, security or even life, is no more guaranteed by the political authority.

Recently, Chief Uzodinma was yelling at all Imo citizens living in the diaspora and mandating them to return home for Christmas even when he has done nothing over the death of Unachukwu, who returned home and was killed by agents of the state under his watch! Uzodinma should be reminded that Unachukwu is just a poster boy for all Imo citizens murdered inexplicably in the state right under his watch while he busies himself with frivolities.

Chief Uzodinma must wake up and realize he has the moral as well as legal responsibility to protect Imo people and bring the perpetrators of these killings to book! So many tears have been shed, and so much blood spilled. Uzodinma’s complacency, nonchalance and silence over these carnage and ravages can neither be rationalized nor tolerated any longer. He should be a governor even if for one day and stop the reckless destruction of human lives in Imo state.

May the soul of Oguchi Daniel Unachukwu and the souls of very many others killed in Imo in the wake of the failure of government rest in peace. Amen.