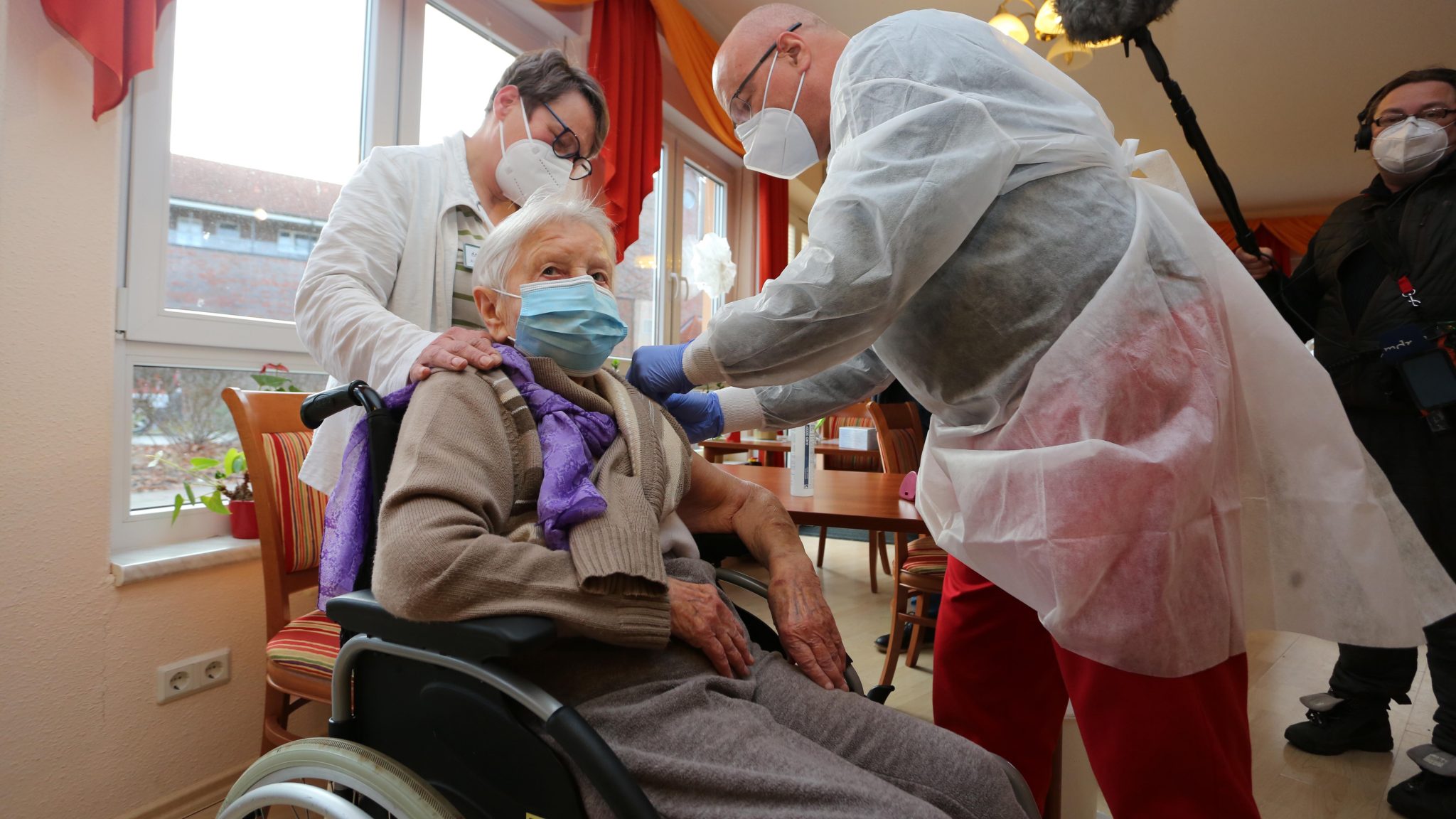 Edith Kwoizalla, 101 years old, receives the first vaccination against the novel coronavirus COVID-19 by Pfizer and BioNTech from Doctor Bernhard Ellendt (R) in a senior care facility in Halberstadt (Seniorenzentrum Krueger), central northern Germany, on December 26, 2020. – The European Union began a vaccine rollout, even as countries in the bloc were forced back into lockdown by a new strain of the virus, believed to be more infectious, that continues to spread from Britain. The pandemic has claimed more than 1.7 million lives and is still running rampant in much of the world, but the recent launching of innoculation campaigns has boosted hopes that 2021 could bring a respite. (Photo by Matthias Bein / dpa / AFP) / Germany OUT

A 101-year-old woman in an elderly care home became the first person in Germany to be inoculated against coronavirus on Saturday, a day before the official vaccination campaign was scheduled to get under way in both Germany and the EU.

Edith Kwoizalla was one of around 40 residents and 10 staff in a care home in the eastern state of Saxony-Anhalt to receive a jab of the Pfizer-BioNTech vaccine, the home’s manager Tobias Krueger told AFP.

The Pfizer-BioNTech vaccine became the first to get the go-ahead for use in the West, when Britain gave its approval on December 2.

As other nations from the United States to Saudi Arabia to Singapore followed suit, Germany impatiently prodded the EU’s drugs regulator, the European Medicines Agency, to bring forward its decision from December 29.

The EMA finally gave its green light more than a week early, on December 21.

On the same night, the European Commission declared that the entire bloc would start the inoculation operation from Sunday, December 27.

“For us, every day counts,” said Immo Kramer, a vaccination centre official for the region, told MDR public television.

On Saturday, tens of thousands of vaccine doses were delivered to the regional health authorities, who then distributed them to local vaccination centres.

Elderly care home residents, people aged 80 and over and care staff will be the first to get the jab.

“The vaccine is an essential key in conquering the pandemic,” he told a news conference.

“It is the key that will allow us to take back our lives,” but he warned that getting everyone immunised would be a “long-haul” effort.

Germany, which appeared to fare relatively well in the first wave of coronavirus in the spring, has been hit hard by a second wave.

According to the latest data compiled by the Robert Koch Institute, a total 14,455 new infections have been reported in the past 24 hours, and 240 new deaths, bringing the total number of fatalities so far to 29,422.

US govt watchdog calls for sanctions on Trump...

No country will be spared, warn experts, as...