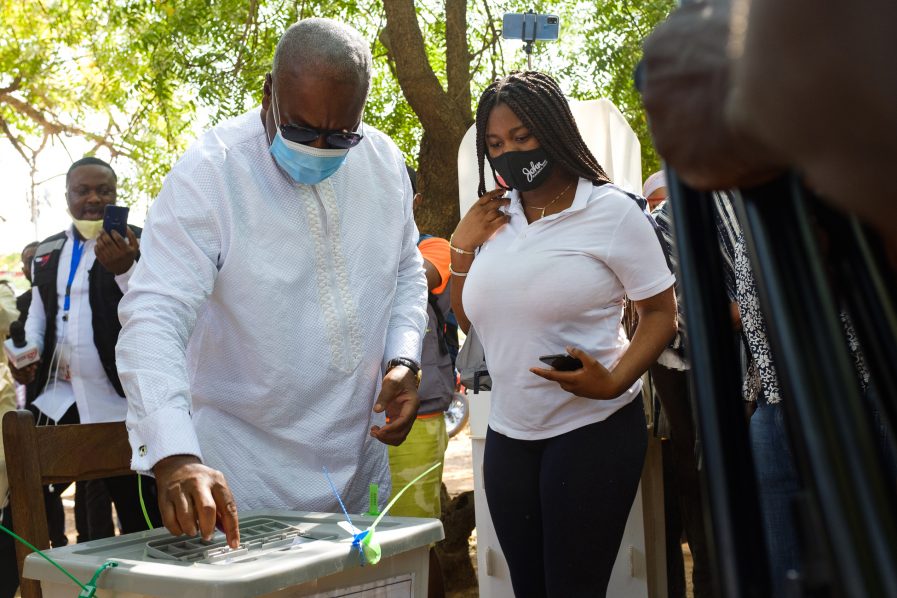 Former Ghana’s President John Dramani Mahama casts his ballot as he votes for the presidential and parliamentary election at an open-air polling station, in his hometown Bole, Ghana, on December 7, 2020. – More than 17 million people are eligible to vote in presidential and parliamentary elections in Ghana with the race for the top job expected to be a close-run fight between incumbent Nana Akufo-Addo and longtime opponent John Mahama. (Photo by Nipah Dennis / AFP)

Ghanaians, yesterday, cast their votes in a presidential election viewed as a close fight between President Nana Akufo-Addo and his longtime rival John Dramani Mahama.

The two candidates signed a peace pact on Friday in the spirit of ensuring Ghana’s traditionally violence-free transfer of power already experienced on seven occasions since the country returned to democracy nearly 30 years ago.

Enoch, a voter at the Osu neighbourhood in the capital city of Accra, expressed optimism that the poll would be free and fair.

“This election means a lot. Actually, we go through this every four years. It’s a normal thing and we hope everything goes well and that we get what we want,” he said.

Akufo-Addo of the New Patriotic Party (NPP) and Mahama of the National Democratic Congress party (NDC) have already gone head to head in prior elections and the two major parties have always accepted electoral outcomes by pursuing any grievances through the courts.

A voter at the Osu neighbourhood in Accra, who identified himself as Gideon, also sued for peace.

He stated that while some of the voters are Christians, others are Muslims or atheists. So, we just have to pray that there will be no violence. We want it peaceful and we want it together.

He adds: “We should be addressed as brothers and sisters for there is no reason to do anything violent.”

Around 17 million Ghanaians registered to vote for a new president and members of parliament for 275 seats.

They are 12 candidates who are running for president, including three women and key issues include unemployment, infrastructure, education and health.

Ghana has made giant strides over the past two decades and is the world’s second-largest cocoa producer.

However, there is room for improvement as many Ghanaians still live in extreme poverty with scarce access to clean water or electricity.

The COVID-19 pandemic has also hit the Ghanaian economy hard as growth in the nation of 30 million people is expected to fall this year to 0.9 per cent, which is its lowest in three decades, according to the International Monetary Fund (IMF).

When asked of the preparedness of the electoral commission, the executive director for the Institute of Democratic Governance, Dr. Emmanuel Akwetey said: “In terms of the efficiency, in terms of compilation of the register and following the procedures, they have even published the voters register for the first time on their website, although they have had to pull it down for the time being.

“So I think they are pretty confident that they have done everything on time. Apparently, they have distributed ballot papers and all the materials that are needed.”

Mahama voted at the Bole District Assembly Polling Centre. In his verified Twitter handle @JDMahama, he said: “We can restore the soul of our nation. We can cure ourselves of the grotesque levels of corruption and insufferable inequality and put Ghana on the path of becoming a truly advanced nation.”

“My apologies to all, I have decided to forgive my offenders… Read Gov Umahi’s Plea

Threat to NewsLeverage Publisher, Is Threat to Abia...

Australia orders all arrivals to self-isolate

The Untold Story Of Ohakim’s Arraignment: An Investigative...

Tom Brady turned down chance to speak at...