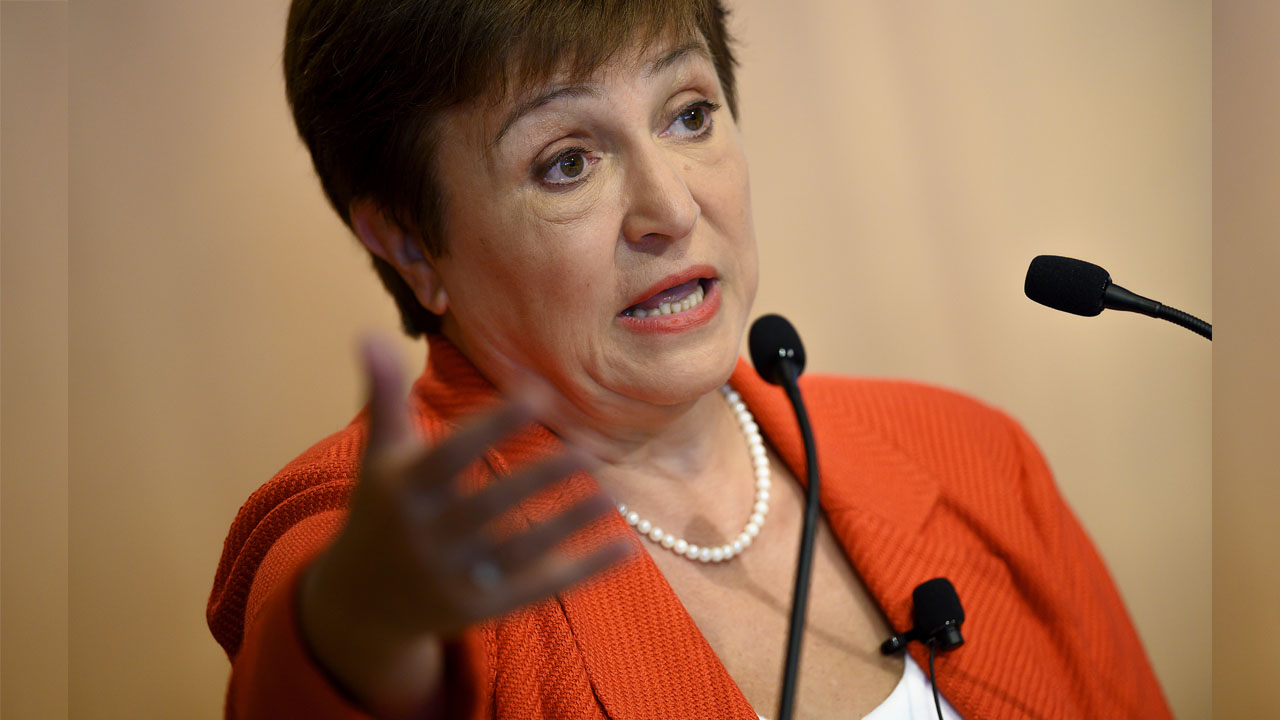 (FILES) In this file photo taken on January 17, 2020, Managing Director of the International Monetary Fund (IMF) Kristalina Georgieva speaks in Washington, DC. – The global coronavirus pandemic is causing an economic crisis unlike any in the past century and will require a massive response to ensure recovery, IMF chief Kristalina Georgieva said on april 9, 2020. The warnings about the damage inflicted by the virus already were stark, but Georgieva warned that the world should brace for “the worst economic fallout since the Great Depression.” (Photo by JIM WATSON / AFP)

The global economy faces a hard road back from the Covid-19 downturn, and nations should remove trade barriers on medical technologies to aid the recovery, the IMF chief said on Thursday.

The call from Managing Director Kristalina Georgieva ahead of this week’s G20 leaders summit comes as countries grapple with the fallout from a pandemic that has killed hundreds of thousands and caused a sharp contraction in growth.

“While a medical solution to the crisis is now in sight, the economic path ahead remains difficult and prone to setbacks,” Georgieva said in a blog post.

Major pharmaceutical companies are now closing in on vaccines against the virus, amid a global spike in cases that has caused some countries to reimpose restrictions to curb transmission.

“The resurgence in infections is a powerful reminder that a sustainable economic recovery cannot be achieved anywhere unless we defeat the pandemic everywhere,” Georgieva said.

She called for countries to cooperate to ensure an adequate supply of vaccines, tests and medicines, as well as “multilateral efforts on the manufacturing, purchase and distribution of these health solutions — especially in poorer nations.

It also means removing recent trade restrictions on all medical goods and services, including those related to vaccines,” Georgieva said.

– Last summit –
The Covid-19 pandemic has caused more than 1.3 million deaths worldwide, according to an AFP tally, and wreaked a grievous toll on the global economy.

The IMF expects global growth to contract by 4.4 percent this year before rebounding 5.2 percent in 2021. However, Georgieva noted third-quarter growth was better than expected in the United States, Japan and European countries.

The virtual summit hosted by Saudi Arabia is set to be the last during the term of US President Donald Trump, who lost his bid for another four years in office earlier this month, though he has rejected the results.

Under his leadership, Washington has engaged in trade conflicts with strategic rival China as well as its European allies, which slowed down global growth even before the virus’s arrival.

In a separate research note, the IMF called for countries to work together to finish the pandemic off.

“In the immediate term, the G20 should refrain from imposing or intensifying trade restrictions and promptly remove those put in place since the start of the year on all medical goods and services as well as on any goods and services related to vaccine manufacturing and distribution.”

The IMF called for Britain and the European Union to conclude a trade deal that would forestall new trade barriers as London disentangles itself from the regional bloc.

The lender also reiterated its call for more public spending to help countries escape the growth slowdown and reshape their economies for both growth and to fight climate change.

How to use your smartphone for telehealth visits

Coronavirus: ‘Half of humanity’ under social distancing curbs

Governors give mixed response to Trump’s handling of...

Nigerians outraged by murder of student in church