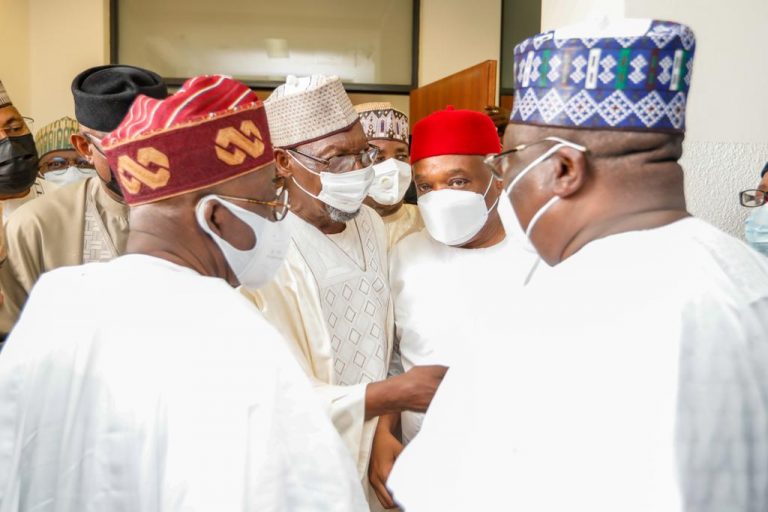 A coalition of Arewa socio-political group in the 19 Northern States has commended the statesmanship of the Chief Whip of the Nigerian Senate, Senator Orji Uzor Kalu, for his humility , peacefulness, commitment, sacrifices and benevolence exhibited in his pursuit to become the president of Nigeria after President Muhammadu Buhari.

The group under the aegis of Arewa For Good Governance (AFGG) commended the former Abia state governor for playing politics without bitterness and being an embodiment of true leadership with his constant display of love and spirit of healthy competition towards his political opponents.

.
In a statement signed by the Secretary General Dr Hassan Ibrahim , on Thursday , in Kaduna , the group expressed delight over Kalu’s show of sportsmanship when Former Lagos state Governor and presidential aspirant, Bola Ahmed Tinubu visited the National Assembly

Tinubu, on Wednesday visited the party’s caucus in the National Assembly and demanded their support for his 2023 presidential aspiration.

The former Lagos governor arrived at the National Assembly Complex at 2:45 p.m. and addressed the lawmakers on a wide range of issues including the future of the APC and how he can work together with the parliament to accelerate Nigeria’s drive toward economic prosperity, security and perfecting of the country’s democratic structures.

The meeting was attended by the Senate President, Ahmad Lawan, principal members of the National Assembly including Orji Kalu and members of the APC caucus in the parliament.

The Group noted that Kalu’s presence during Tinubu’s visit has proven that the Senate Chief Whip is not a desperate politician who can sacrifice friendship on the alter of ambition.

“ Despite being at the frontline of the contest for president in 2023, Kalu did not sabotage or show any element of desperation when his political opponent visited National Assembly. Other senators who declared for president absconded and refused to be in the meeting with Tinubu. But Kalu joined the Senate President to receive him and gave him all the necessary attention and support needed in the National Assembly .

“Our admiration for Kalu has increased because he has proved what Tinubu said sometime ago about his long time friendship ties with Kalu . It shows that both of them are no near enemies as speculated by some elements. We want to appeal and encourage other politicians to learn from Kalu and concentrate on building bridges beyond interests .

“The country needs a man who would accommodate all other interests without bitterness and that is the reason we will continue to support Kalu for president . He is the only detribalized politician whom all other politicians are comfortable with . He is a good leader and a great manager of resources and we will not rest until he is sworn in as president of Nigeria. “ the Secretary General said

The group urged other Nigerians particularly politicians, to borrow a leaf from the template of love , peace and unifying spirit institutionalized by Senator Orji Uzor Kalu so as to build a society where love and compassion becomes a norm that could help “reduce despondency in our society”, the statement added.