Hon. ThankGod Akoma Pays Last Respect To Late Mother Describes her as “One In A Million” 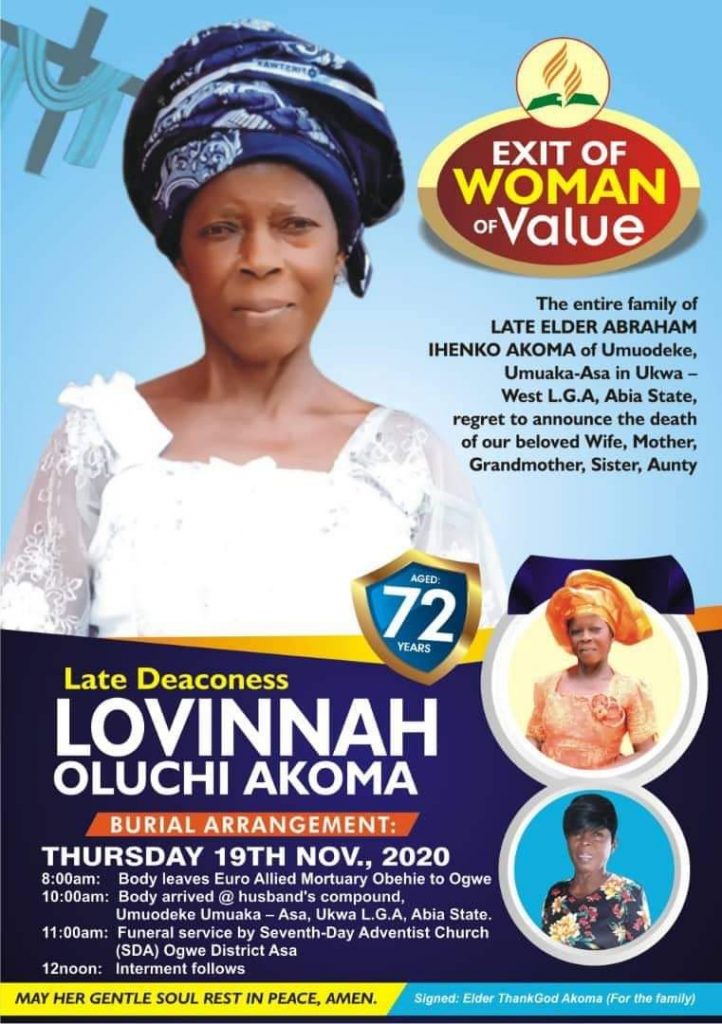 Hon. ThankGod Akoma of Umuaka Asa, in Ukwa West LGA of Abia State has described his mother, Late Deaconess Lovinah Oluchi Akoma as a virtuous woman whose legacies shall forever be remembered by posterity.

Hon. Akoma, Department of Transport Management Technology, Federal University of Technology Owerri, (FUTO) amidst a broken heart described his late mother as the best gift of nature to the entire family and community in general, noting that the deceased was an epitome of godliness, as he urged other mothers to edify their children and the world around them through their words and conducts.

He prayed on behalf of the family, for eternal rest for the soul of the departed, while pledging to follow her footprints.

In his tribute , he wrote:

“Words alone can’t explain my state of devastation since you left us. At first, I had thought you had gone on a trip to be back someday. But no, mum, you have embarked on a journey of no return, you have departed from the surface of this earth, gone to be with your creator.

“It is said that ‘all mother’s are women but not all women are mothers’. But, mummy, you were a mother indeed and I would never have wished for a better mother than you.
You were indeed a rare gem, a virtuous woman and one emulated by others.

“Were you just a woman, I would  chose you a million times. Posterity shall ever speak about you and your legacies. Saying you were one in a million is an outright understatement.

You were a peace giver, mother, peace lover and maker. I had hoped for a day I shall show you to the entire world; to show them how much of a good mother you were; an epitome of morality, love, kindness, humility and most interestingly godliness. But, little did I know that you would leave us this soon.

“Having you as a mother was the best gift mother nature could offer us and we are forever grateful to have had you and still wish we could retain you longer than this but who are we to question God?

“You taught us of the dignity of labour; how to exist in love and unity with all and sundry. Your outstanding legacies we shall ever uphold.

“Mother, you shall forever remain in our hearts and we pray God the Father grants you rest up until we meet again and never to part again”