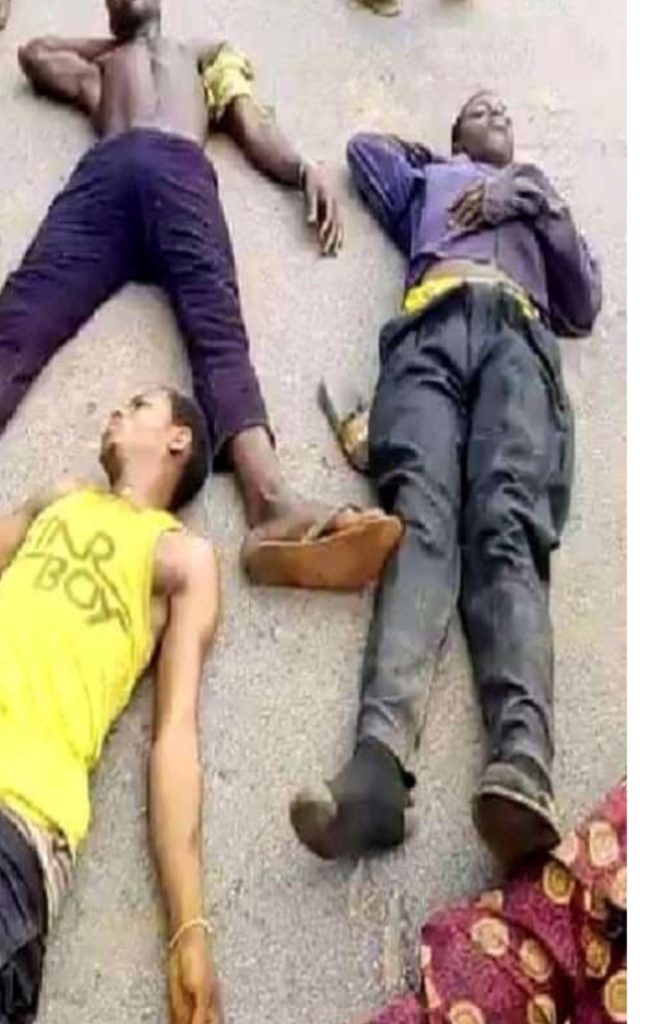 A group of angry youths had, last weekend burnt to ashes bodies of five suspected kidnappers, in Edo state.

The five suspected kidnappers were burnt to death by angry youths along the Afuze-Uokha road in Owan West Local Government Area of Edo State at the weekend.

The local vigilante group in the area, as learnt, upon getting information on the activities of the Kidnappers, mobilised and ambushed the hoodlums.

Meanwhile, it was reported that the suspected kidnappers, who were obviously armed with different kinds of guns, had launched an attack on some travellers travellers, while abducting the abductee, as they made for the bush with them.

The youths, infuriated by the hike in kidnapping incidents in the area overtime, quickly grasped the Suspects from the Vigilante members who were already talking the latter to the police station, set them on fire.

An eye witness has this to say: “The kidnappers would have been contacting the families of the abducted travellers to ask for ransom if not for the bravery of the vigilantes while locals who were fed up with the criminal activities of these kidnappers set them on fire and left to die,”

READ MORE:  "I got the gun from my married boyfriend" ...Girl who took gun to school... *she took it herself where I kept it under the bed...Okon

The spokesperson of the Edo State Police Command, Kontongs Bello, who confirmed the incident disclosed that the matter was still being investigated.

“After the kidnap, the vigilantes went in search of the criminals who they apprehended in the bush. As they were coming out in Uokha Community on their way to the police station, angry youths in Uokha and adjoining towns took away the suspected kidnappers from the vigilantes. All efforts to get the suspects to the police proved abortive as they were burnt to death. The investigation is ongoing,” he added.