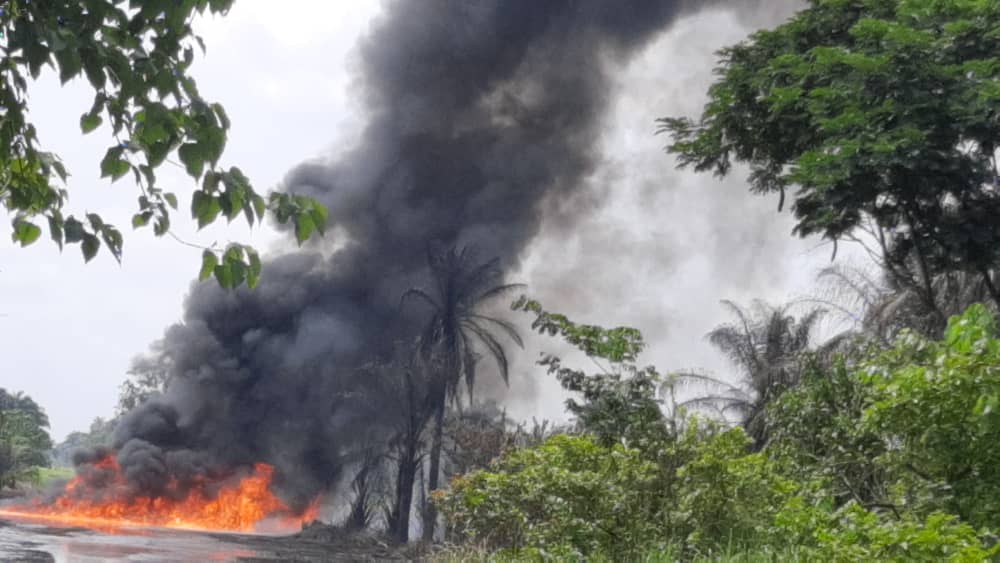 Obiakpu Community in Ohaji/ Egbema Local Government Area of Imo State was on Friday thrown into anguish as a fire gutted their farm lands, economic trees and destroyed aquatic lives in the area.

Residents of the area fled from their homes to save their lives as a result of the fire.

An eye witness and an indigene of Obiakpu, who pleaded anonymity, informed, “The Fire started by 12:05pm on Friday. It may have been caused by a damaged pipeline owned by Nigeria Petroleum Development Company,NPDC. It’s unfortunate and it will be devastating for our people, who have lost every means of their livelihood.

“The fire has damaged many crops that were recently planted this farming season. Economic trees like palm trees and other kinds of fruits are no more as a result of this.

“Our people are mostly farmers and fishermen and due to the oil spillage, aquatic lives have been destroyed and we can no longer fish in the river.

Furthermore, he called on the Imo State Government led by, His Excellency, Distinguished Senator Hope Uzodinma to come and assist them financially so, they won’t die of hunger.

Addressing newsmen over the incident at the place, the Special Adviser(SA) to the Governor of Imo State on Oil and Gas Matters, Rt. Hon. Goodluck Nana Opiah, described the fire outbreak as unfortunate, saying, he would his boss, the Governor of Imo State, Distinguished Senator Hope Uzodinma of the inferno.
He said, “As the Special Adviser on Oil and Gas Matters to the Governor of Imo State, His Excellency, Senator Hope Uzodinma, I will inform him of the incident and the predicament, the people of Obiakpu is into over the fire incident. I have setup a committee and will wait for them to come up with what actually caused this fire outbreak, even on a river.

Furthermore, Opiah, who was a former Speaker of the Imo State House of Assembly, stared, “I am not ruling out the activities of illegal Oil drillers on this as bunkering has been a menace in this area, but we have to exercise patience for the Committee to come up with her position before we can know the next things to do.

“The destructions of economic trees and aquatic lives are unfortunate as the community must have thrown into untold hardship. The health hazards cannot be quantified too. The essence of destruction is devastating and the river cut across three communities and into the Urashi River.

“I have contacted the Shell Petroleum Development Company before now to use their fire fighting equipment to put off the fire and they have tremendous efforts so far as the fire is under control now unlike when it started yesterday”.

“It has not been confirmed if the fire outbreak was a result of bunkering or because of a bursted pipeline, but we glorify God as no loss of life has loss been reported so far, even as no building was also affected”, the Interim Management Chairman(IMC), Hon. Marcel Amadioha, stressed.