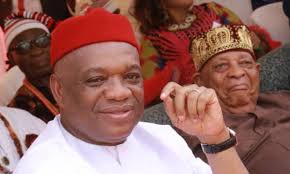 Senate Chief Whip, Orji Kalu, says many Nigerians abroad are now able to switch allegiance from their host countries to Nigeria as a result of a bill which was sponsored by him in early 1990s.

Kalu, who stated this while reacting to the decision of a footballer, Ademola Lookman, to switch from England to Nigeria, commended former military president, Ibrahim Babangida for giving his assent to the bill.

His words: “With delight I received the news of FIFA’s approval for Ademola Lookman’s request to switch international allegiance from England to Nigeria.

“I more delighted that till date,like Lookman Millions of other Nigerians have become beneficiaries of the “dual nationality rights bill” which I moved 29 years ago (which grants Nigerians dual citizenship) as a member of House of Representatives under the platform of the National Republican Convention (NRC) where I held two key positions of Deputy Chairman of the Finance and Internal Affairs Committees.
“I’ll also appreciate once again our Ex-president, Gen Ibrahim Badamasi Babangida(rtd) for graciously granting his assent to the bill.”