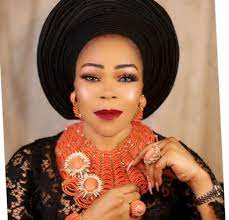 Finally, Nollywood Actress, Shaffu Bello has opened up on her failed marriage, regretting that she sacrificed same in pursuit of her successful career.

According the Veteran actress in an exclusive interview with media Personality, Chude Jideonwo, she abandoned her husband and kids in America not fewer than 10 years ago in search of greener pastures for herself in Nigeria.

Hear her: “I came back to Nigeria to spread my wings, I felt like I was pregnant and couldn’t have a chid, like my wings were sort of closed in, like I was boxed in.

I needed more, my soul needed more, I was yearning for more. I didn’t know the price that will come with it but I had to make the sacrifice. I paid the price of not having a connection with my children then. My daughter was 13, my son was 11. I was an hands on mother before I left them. At a point I even quit my job to raise my kids. I sacrificed a lot for them to be nurtured only to now leave them in their early teenage years with their father and then again, their dad is out there making a living and i am here in Nigeria making a living so they missed the joint parental touch but that is about that”

READ MORE:  Why he ended the Relationship.
… Decoration, Appendixes, Attachments or what?
With RN Egbulefu

I left my husband because he allowed me. We divorced 5 years ago when I was 45 and that was a huge sacrifice, he is a good man and father to the children. The distance affected us, long distance relationship was difficult but I knew I wanted this, if I go back, it will be too much of a sacrifice, I wouldn’t be myself and at some point i will resent him so I had to focus on what I wanted. I don’t regret the decision I took.”

When asked how she handles being judged over the decision, Shaffy Bello responded saying; “I judged myself but I thank God he did it for me this way, because it is better for me. You see, I don’t care much what people say about me, but I care more about my children and close knit family.”

Continuing, she admitted to the need to give love a second chance, saying, “Yes, I will. I love marriage and marriage at this age for me is gonna be sweet, no babies to nurture just enjoyment,” she said.