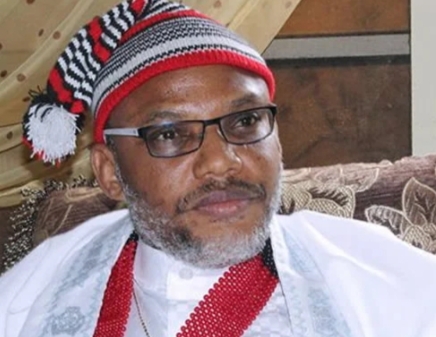 I’m In Good Spirit, Says Kanu, As He Appears In Court
… Calls for civility among supporters

Mazi Nnamdi Kanu, the leader of Indigenous People of Biafra, IPOB has appealed to all his supporters to remain as calm and civil as ever, in their conducts, as he appears on Tuesday (today) before Justice Binta Nyako of a Federal High Court in Abuja.

Kanu advised his followers to “maintain absolute civility in their conduct, as has always been demonstrated.”

Kanu’s lawyer and leader of his legal team, Ifeanyi Ejiofor,

This is contained in a statement Kanu’s lawyer and leader of his legal team, Ifeanyi Ejiofor,
issued on Monday after a routine visit to his client, in the headquarters of the Department of State Services.

The leader of the freedom fighting outfit who is standing trial over alleged terrorism, assured that he was fully prepared for the court appearance, saying he is in good spirits.

He wrote, “We conducted our routine court-ordered visit to our indefatigable client – Onyendu Mazi Nnamdi Kanu at the DSS headquarters. Today’s visit was unique because it was basically to harmonise the final legal strategy for tomorrow’s outing. Onyendu is fully prepared for his court appearance tomorrow, and he is in good spirits. We are confident that justice will be done tomorrow too.

According to Ejiofor,
“Onyendu thanked millions of his supporters and Umuchineke for standing shoulder to shoulder with him thus far. However, Onyendu is particularly worried over the continued incarceration of Mrs. Ukamaka Ejezie (Mama Biafra), whose only offence was daring to be in Abuja in solidarity with him.

READ MORE:  'Spy for Egypt' goes on trial in Germany

“The legal team is aggressively exploring all permissible legal frameworks to ensure Mama Biafra’s release. As you may be aware, the court has fixed July 20, 2022, for definite hearing of the application we filed for her release.

“May we respectfully use this medium to appeal to Onyendu’s followers, supporters and well-wishers, who intend coming to court tomorrow in solidarity with Onyendu to please maintain absolute civility in their conduct, as have always demonstrated.”