Government of the Federal Republic of Nigeria, and in Imo State, have received a backlash from Igbo indigenes in Diaspora over the deteriorated level of security in the land, with a study of alleged Military invasion in Orlu and Orsu Communities in Imo State.

Registering their discountenance on the general security situations across boards, the Deputy President, Ohaneze Ndigbo, South Africa, Dikejiejemba Chuks Chilaka bemoaned the perceived insensitivity on the part of the leaders.

Dikejiejemba Chuks Chilaka remarked that only if the elected persons knew truly that power is transient, they would know that there is always life after executive power.

Amidst devastation, he asked, “what would someone that misused his power be remembered for?

“There is life after executive power. What will your people remember you for. Will you be remembered by history as one against the interest of your people or one in their support”.

The Imo State born South African based however charged Governor Hope Uzodinma of Imo State, in conjunction with the Federal Government to give peace a chance.

Chilaka enjoined them to call the aggrieved youth within the ambit of the Eastern Security Network ESN, to a denouement, adding that in such situation, conflict is never resolved through reprisal action.

“The Igbos in Diaspora are not in support of violence, but on this one, we are in support of Nnamdi Kalu, and we believe that he should be listened to”.

Speaking further, Dikejiejemba Chilaka who decried the lingering marginalisation of the Igbo race, regretted that “there was yet no sign of restructuring from the head.”

He opined, “For Nigeria to attain her proper position in committee of nations, we should jettison ethnicity and think nation building through the implementation of the sovereign national conference, handed over by former President Goodluck Jonathan”. 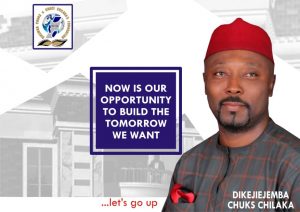 READ MORE:  Nigeria at 60: Buhari Drops Another Shock For Nigerians Amidst Celebration

“Let us restructure Nigeria to enable every region develop in her on pace. The above cannot be achieved without reaching out to aggrieved brothers in IPOB and others”.

He concluded by urging the APC led Federal Government to use the remaining years in power to extend basic infrastructure in the South East geo-political zone.

In addition, he averred that the era of photo infrastructure and television abracadabra is long gone.

“Extend physically seen infrastructure in the South East, and not photo show. There ought to be equal respect to all citizens irrespective of language, religion or ethnicity”, Chilaka submitted.

OYC Condems Division Of Ndigbo Through Conspiracy of...

My Sentence in Prison has not Diminished my...