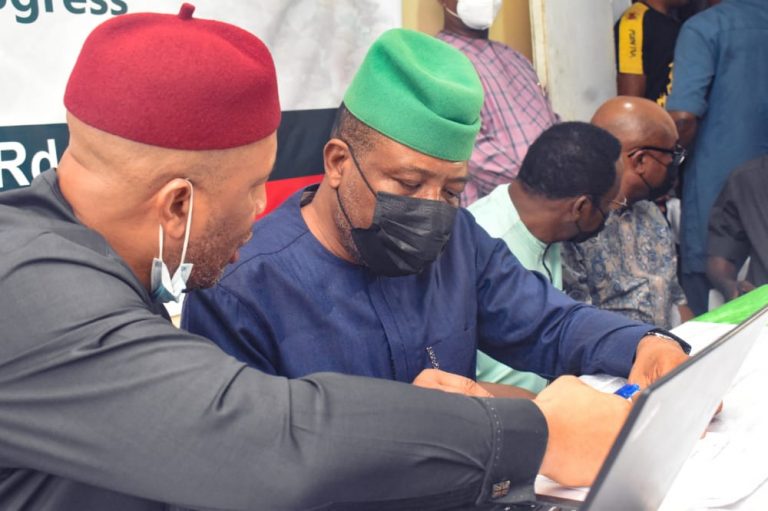 The People’s Democratic Party (PDP), Imo State, under the chairmanship of Engr. Charles Ugwu, on Tuesday, October 19, 2021 flagged off its E-Registration Exercise.

Hon. Mekam Mgbenwelu, the Chairman of the exercise in Imo State, in his opening remarks gave the scorecard of how they started and where they currently are.

He briefed party leaders and stakeholders on the ongoing exercise, stating that the process has commenced with briefing in all 27 Local Government Areas, where they were asked to comprise a list of two persons each per ward, with inclusion of their phone numbers and photos alongside any other vital information needed.

Without mincing words, he made it known that the compiled list has been sent to Abuja, and he stated that out of 27 LGAs, 18 have submitted a complete list, while 9 LGAs are yet to complete theirs.

He went ahead to mention the LGAs that are yet to complete their list which include Owerri North, Ehime Mbano, Aboh Mbaise, Ideato North, Ikeduru, Mbaitoli, Njaba and Obowo. And on this, his Excellency Rt. Hon. Emeka Ihedioha asked the LGA Chairmen of afore-mentioned to ensure that their lists are completed for proper documentation, before the end of the day.

Mekam went ahead to state emphatically that he has also briefed the Imo PDP New Media on the situation of things and as such, “want them to support by helping to sensitise people to register and key into the project.”

He mentioned that the total number of wards currently are 305 with 588 ward registration agents available.

Continuing, he opined that for this excercise to be very effective, successful and in flow with the tide, there’s need to imbibe direct primaries and electronic transmission of results.

READ MORE:  REFUTAL: Prof Ibe Is Not Being Sponsored By Governor Ikpeazu

He requested that those in the ward should be adequately supported to enable them discharge their duties effectively.

He suggested also, that a technical support team (TST) should be set up, whose members would serve as call center agents, who would be used to monitor events and see to technical complaints. On this note, he requested that a laptop and two android phones be made available to them alongside recharge cards for data in order to yield better results.

The State Chairman of the Party, Engr. Charles Ugwu, in his remarks started by appreciating all who came, as he thanked Rt. Hon. Emeka Ihedioha immensely for taking the lead.

He stressed that the chapter system should be encouraged as it would make it possible for the party to be effectively prepared for the forth-coming election.

Rt. Hon. Emeka Ihedioha who spoke during the flagoff excercise stated that that the day’s event is a welcomed one as it is going to bring a new chapter in to the history of our great party.

He reiterated that the direct primaries is very apt as it would avail every Political party the opportunity to adopt direct primaries for all elections which would be a more transparent system.

Ihedioha speaking futher, asked all party faithfuls to remain focused and steadfast as he encouraged them to contribute their own quota towards ensuring that success is achieved.

Futhermore, he reminded party members that PDP is one big family and as such, shouldn’t allow propaganda to tear them apart as the aim of those propagating these falsehood is to cause distraction.

At the Secretariat to receive His Excellency and his team were:

Party officers from the Southeast Zone, including:

Some of the leaders who joined H.E. to the flag off event were:

The LGA Chairmen present at the e-Registration flagoff event include:

The Imo PDP New Media Committee was also present, including:

PDP! Power to the People!