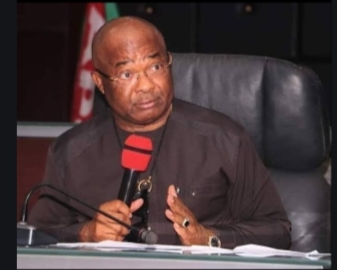 The insecurity in Imo State has reached a shocking height. At the break of each dawn throughout this week, residents of Orlu have continued to wake up to decapitated human heads displayed in public places. Today, it was at Orie Okporo in Orlu that yet another head, fleshly cut off body and dripping with blood, was dropped on a table and left to the full glare of the public.

If the protection of lives and property is still the primary purpose of political governance, Chief Hope Uzodinma should never have any business in the governance of the smallest tier of the modern state. While the harvest of heads is ongoing in Orlu, Uzodinma is in faraway Abuja doing nothing of any significance to Imo people.

Not a word has been heard from his regime about the appalling situation. No single effort has been made by the man to understand the situation, guide the people, allay their fears and protect their lives. The truth is not so much that the regime of Uzodinma has failed than that Imo currently shares all the semblances of an ungoverned space, and each day brings a sorrow which the next day makes worse!

A general air of fear, terror, horror, despondency and despair hovers around the populace, and across Imo State, whoever that builds on the government for life and safety is only building on quicksand. It is also like gambling with one’s life.

It is abominable for Uzodinma to sit idly and receive monthly allocations while headhunters take over Imo State. He also pockets the security votes and secures nobody but himself. He taxes the people to starvation without service delivery, and he, in the end, looks the other way as his people are beheaded like goats. He does not visit any part of the State even in the face of the most atrocious happenings. But he is quick to junket around in Abuja for his maximum pleasures.

If something as outrageous as human heads littering the streets could not bestir Uzodinma to speak to the people, visit the people and act to reassure and protect them, he now needs to explain to Imo people what his mission among them is. And the only valid conclusion is that it gives Uzodinma orgasmic satisfaction to watch agonies reign in Imo State.