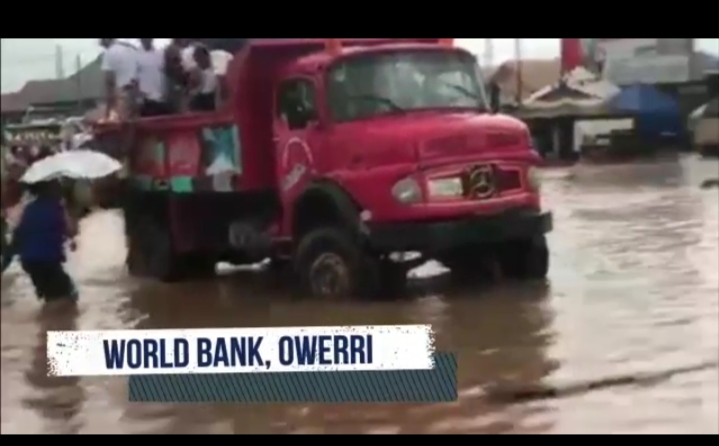 A clarion call has been made to Sen. Hope Uzodinma, the Governor of Imo State to hastily call the contractor handling World Bank Road project to order, as the spot has overtime, proven a death trap to inhabitants of the state, during the rains.

Residents of Owerri, the capital of Imo State who have overtime, lamented the death trap as posed by the river-like flood ravaging the heart of the city.

Both motorists and commuters are endangered by the menacing effects of erosion in the area, which often is impassible during the rains, as it were.

Sources who spoke to famousreporters.com in anonymity bemoaned the deplorable state of roads in the area, as well as its attendant hardship on the people.

A visit to the areas by Famousreporters.com confirmed that the roads were dotted with wide and deep potholes.

According to an indigine who spoke in a viral video, any attempt to drive past the World Bank area would result in a visit to the mechanic.

He said: “The state of the roads has become a serious challenge for motorists, motorcyclists and residents. Anytime it rains, the road is usually flooded, making difficult for cars, buses and motorcycles to ply.

“Residents complained bitterly that the bad roads were affecting their businesses and livelihood in different ways. There is no day he visits Imo State with his vehicle, without taking it to mechanic.

It would be recalled that famousreporters.com had on May 10, 2021 reported about how a prominent son of the state, the publisher of Daily Nigeria Horn Newspaper, High Chief Bright Chimezie Njoku narrowly escaped death by flood, at the same spot.

Embittered anonymous sources who spoke amidst regrets wailed
“We are calling on the Contractor handling World Bank Road project to hurry up and execute the job. If he needs mobilization, then government should do something and very fast to save lives otherwise government should reprimand him if he is not being owed yet unable to deliver the project because our lives are endangered by that Roundabout. It’s a visible death trap and something has to be done about it.”