“Due to the fact that we are the first sons of Nigeria, that is why I said we would not leave Nigeria”, were the hard words of Gburugburu Ndi-Igbo Dum, His Imperial Majesty (HIM) Amb. Sir Dr. Mishak Nnanta KJM KSM JP, to agitators of the Sovereign State of Biafra. 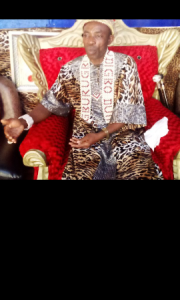 The profound Igbo leader stated this in his Gburugburu Ndi Igbo Dum compound, Umuajata-Olokoro in Umuahia South L.G.A, of Abia state, during a courtesy visit of the leadership and members of the Unity Federated Chapel of the State’s Council of Nigeria Union of Journalists.

The President General of the sociocultural organization, Igbo World Union, (IWU) frowned intensely at the retarded development in the Southeast despite their key role in the development of the nation.

However, according to Gburugburu Ndi-Igbo Dum, the IPOB and MASSOB self- actualization movement shall be a thing of the past should the Nigerian president of Igbo extraction emerge in the year 2023.

While revealing the true position of the Igbo race in the country as the first born, he insisted that leaving the country, Nigeria would and must not be the last resort.

He described the Igbo man as trailblazers, recounting that the Igbo man owns not less than 75% of buildings in the FCT, Abuja, as well as Lagos State, adding that “the first wealthy man who acquired a very large space in Lagos State was an Igbo man, Odimegwu Chukwuemeka Ojukwu. He brought light to the state.

“Go to Kano state, in Sabongori and other cities, the Igbo man is everywhere with captivating investments. The Igbo man owns chemists in the North; he provides the Northerners with medicines and anywhere they see the Igbo man, they accommodate him they value their lives. And they protect them during the outbreak of war because those medicines are very important to them. If they have started selling medicines, perhaps they started it lately. Igbo remains the first son of the Nigeria nation.

READ MORE:  I Will Not be Cowed, Ex-NDDC Boss explodes, as she Recounts Ordeal Police unwarranted invasion ... Nunieh, now Refugee in Govt' House

“Therefore, what I am saying is that in this country, we should come together and have a dialogue, to produce a man who will go for us come 2023. Because, as for 2023, it’s mandated that like I told President Mohammadu Buhari in Aso Rock with my Ofor lifted up, the next President of Nigeria must emerge from the Igbo nation. It will happen in this life and not in death. It was a message given to me to deliver to him.

Therefore, he advised the Igbo nation to rather work harder towards promoting oneness and unity among them, while insisting on the growth and development of the Igbo culture, with much focus on the language.

Trump orders ban on WeChat Pay and other ‘Chinese’ apps

Just in: Ikoyi Prison on fire