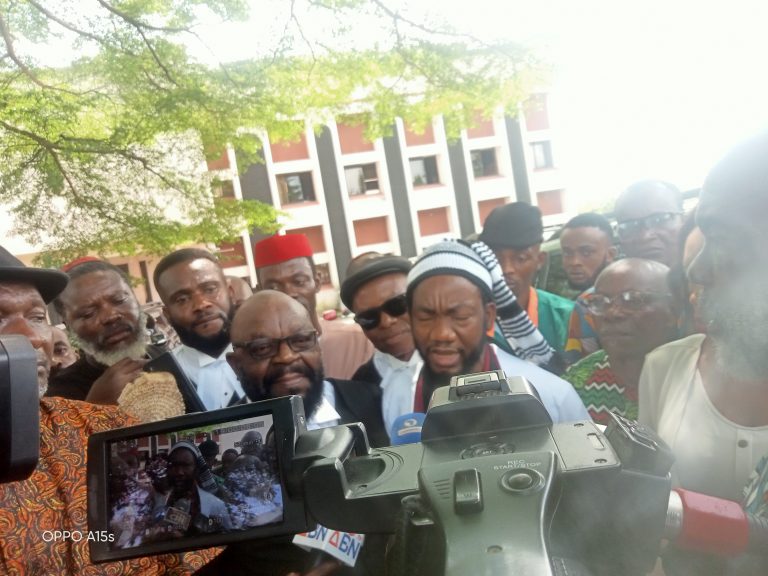 There was jubilation today, Wednesday, at Federal High Court, Umuahia, Abia State’s capital, as the Judge ordered the federal government of Nigeria to release Mazi Nnamdi Kanu, the leader of Indigenous People of Biafra, IPOB and return him to Kenya, from where he was abducted.

The Court condemned vehemently the act of injustice meted out to the Applicant by the Federal Government of Nigeria.

This verdict comes barely a week after the court of appeal in Abuja had discharged Kanu on charges of terrorism on the grounds that he was illegally renditioned to Nigeria.

The court held that having “illegally and forcefully renditioned” the appellant, the trial court is stripped of jurisdiction to continue to try Kanu.

The presiding Judge, Justice E . N Anyadike, described the extradition of Kanu by the government of President Mohammadu Buhari from Kenya without adhering to stipulated legal process, as a flagrant abuse of his (Kanu’s) fundamental human rights.

“I condemn the mental and physical torture, verbal abuse, forceful expulsion from Kenya. His continued detention and torture at the DSS custody amounts to inhumane treatment and threat to life”, she said.

She held that the respondent failed to disprove the claims of the applicant that he was arrested, blindfolded, tortured, and chained to the ground for eight days in Kenya before his extradition to Nigeria.

The Court, therefore, ordered the federal government to pay the freedom fighter the total sum of N500 million as damages following his illegal abduction from Kenya, torture, unlawful detention in the DSS custody, amounting to the abuse of the latter’s fundamental human rights.

It could be recalled that Kanu had, through his Special Counsel, Ejimakor, approached the court challenging his extradition from Kenya on June 19, 2022.

Ejimakor told the court that the suit is sui generis (of a special class) and was primarily aimed at redressing the infamous unlawful expulsion or extraordinary rendition of Kanu, which is a clear violation of his fundamental rights under Article 12(4) of the African Charter on Human and Peoples Rights, as well as Chapter IV of the Nigerian Constitution.

Speaking, he said: “In addition to the rendition, I am asking the Court to redress the myriad violations that came with the rendition, such as the torture, the unlawful detention and the denial of the right to fair hearing which is required by law before anybody can be expelled from one country to the other.

“I am also seeking to halt his prosecution and restore him to the status quo before his rendition on 19th June 2021″, Ejimakor insisted.

“And today, I must commend the Judge for proving to the World today that truly, the Court is the last hope of the common man.”

Corroborating, the National President of Ohanaeze Youth Council, (OYC), Comrd. Igboayaka O. Igboayaka described the resounding victory of MNK as a thing of joy, as he commended the Judge for being incorruptible in discharging her duties.

He admitted that the Judge’s verdict was a clear indication that the Court was the last hope of the common man, while reminding the federal government of the unalloyed support of Igbo youths for Mazi Nnamdi Kanu.

Meanwhile, Famousreporters.com reports that members of the freedom fighting outfit led by the Special Counsel, Aloy Ejimakor and other Lawyers sang sonorously and danced within the Court premises after the judgement.