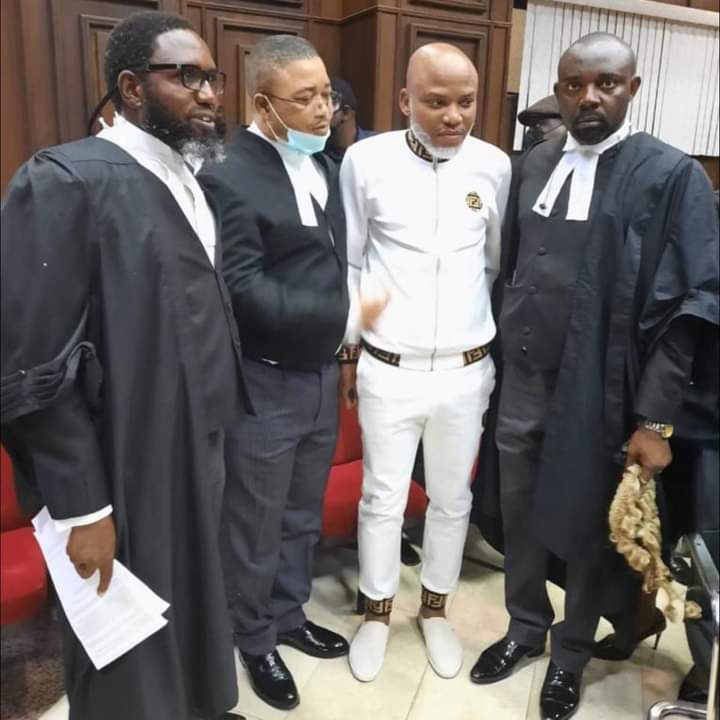 IPOB: Nnamdi Kanu might go home next week
The game is almost up

There are speculations that the indefatigable leader of IPOB might be possibly regaining his freedom as he appears in court by next week.

There are factual evidences that indeed the allegations as levelled against Kanu by the federal government of Nigeria seemingly hold no water so far, as it appears that even the presiding Judge, Justice Binta Nyako is virtually developing a cold feet in the perceived protracted ploy by the president Mohammadu Buhari’s Government.

Indisputable remains the fact that, Mazi Nnamdi Kanu, the renowned freedom fighter did not jump any bail, whatsoever rather he applied his God given wisdom in order to stay alive and tell his story.

There are inarguably too many words of revelations as regards the plot, and the processes through which it was all carried out. However, the one billion dollars question remains: who will ‘spill the bean?’

As it were today, Barr. Ifeanyi Ejiofor, the Lead Counsel to the Indigenous People of Biafra (IPOB), Barrister Ifeanyi Ejiofor, Esq.
has explained that the Court did not entirely deny Nnamdi Kanu Bail.

In a bid to keep the general public abreast of the events as they turn out, the Counsel wrote on his social media handle:

The Honourable Justice Nyako, in his Ruling on Onyendu’s bail application refused to grant an immediate bail, but not entirely denied.

The Court, however, directed that we should return with a fresh application for bail after entertaining an application stating the circumstance(s) under which he left the country in 2017.

The court intends to inquire into that circumstance(s) before entertaining a fresh application for bail. Therefore, the road is not closed for his bail. There is still hope.

However, the Application has just been taken and adjourned to the 26th Day of May 2022 for Ruling and if the Ruling goes in our FAVOUR next week , then ONYENDU willl go home with us.

Furthermore, the Court have struck out the six amended charge brought against Onyendu Mazi Nnamdi Kanu this morning.

We will continue to provide you with updates as events unfold, but for now, remain calm and prayerful, UmuChineke.

Thank you all and remain blessed, Ezigbo UmuChineke.