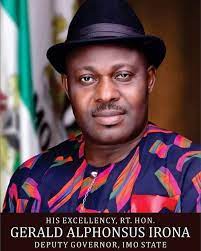 People need to believe the government. This is the reason government must be staffed by credible individuals, imbued with integrity, whose words are bankable. But, when a gang of sleazy characters or when some men and women of loose morals foul up an institution as sacred as government, then society itself is imperiled. Governance, in short, is not for those who in the words of the fine British poet, Rudyard Kipling, are “half devil, half child”.

Since the January 2020 legal mishap that brought Chief Hope Uzodinma to power in Imo State, very few – negligibly few – persons have been unconvinced that the mission of the Omuma-born chief in Imo is entirely far from governance. And for far too many, the mission has been more accurately described: a project to inflict pains, hurt lives, unleash agonies and roll back the progress of Imo State.

Part of that mission is also to repudiate the core values of Imo State, lower the quotient of public expectations, malign outstanding and sterling personalities and ensure that even the prospect for a better tomorrow is made an aching mirage. All of these are now well understood by Imo people. However, what remains confusing is the reason Uzodinma and his band of warmongers have felt so sure that for their nefarious agenda against Imo people to see the light of the day, one man, just one man, must be destroyed. And he is the immediate past Deputy Governor of the State, the Rt. Hon. Gerald Irona.

Time and again, Uzodinma has not hidden his intention to fight Irona using all tools and all means available, including brute force. The first was to open investigation on the seven-month untainted stewardship of Irona, and frustrated that nothing came out from it, Uzodinma resorted to crude antics, perfidy and outright fake news just to throw mud at the glistening image of the accomplished parliamentarian.

At the peak of insecurity in Imo, which actually rose as a result of Uzodinma’s catastrophic failure to offer leadership, all that the disputed regime of Uzodinma could be preoccupied with was Irona. The regime ostensibly commissioned those who went to clone the voice of Irona, and the next hour the Commissioner for Information, one Declan Emelumba, went to town screaming, “Kumbaya, everybody kumbaya! We have gotten the voice of Gerald Irona. He is the cause of insecurity in Imo!”

In the wake of the falsehood being peddled by the regime, the entirety of Oguta, where Irona hails from, became ultra-militarized, possibly in a bid to contain him, thereby making the lives of the people in the area a total misery. This is simply cruelty in its naked form and abuse of power at its best.

Yesterday, this same dysfunctional regime went to town with another fake news. It was falsely reported that Irona had been arrested by the Economic and Financial Crimes Commission, EFCC. Absurd! Since Uzodinma accidentally became Imo’s helmsman, it is one day, one fake news.

The deployment of state authority to propagate and dissemination falsehoods seems to be the only achievement of Uzodinma’s chaotic rule in Imo State. The man is also now like the proverbial child who is fed up with work and has instead chosen to fight. He must desist from this and begin to account to Imo for the many malfeasances that have defined his maladministration. Oga, Irona is not your problem!