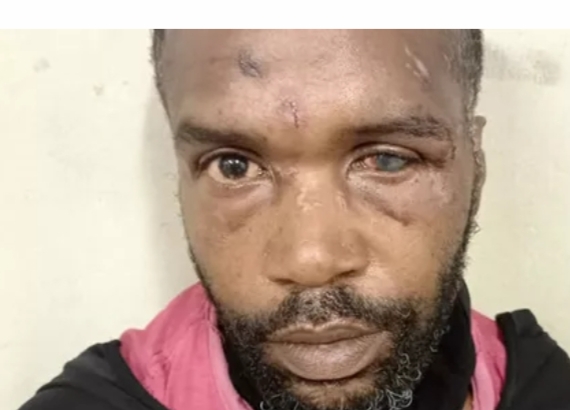 Aggrieved residents of Hanover Park have threatened to kill Georgie Titus, the man who allegedly murdered 17-year-old Jehaan Petersen, if the court ever releases him on bail.

An angry crowd gathered at the Athlone Magistrate’s Court yesterday for the long awaited appearance of George “Georgie” Titus, who is accused of dumping her body the lifeless body of the young girl on the field, after pummeling her to death.

After spending a week in hospital recovering, Georgie stood calm in the dock with visible head injuries after he was allegedly moered by Kalksteenfontein residents during his arrest just days after Jehaan’s body was found.

During court proceedings, the prosecutor revealed that the State would be opposing his release.

She shocked the court when she explained that according to an eye witness, Georgie took Jehaan to the veldjie and after hitting her over the head with a brick. he lifted a concrete slab and hit her again.

The case was postponed to October 3 for Georgie to be assigned a legal aid lawyer for his bail hearing. Outside court, angry residents were out for blood, saying they wanted justice.

Shameegah Carelse, 29, says: “We are here for justice for Jehaan Petersen. This what he did to her was uncalled for nobody deserved to die like this.

“We as a community we are here to support her, her family and her friends because enough is enough.

“There are people who are raising girls, and they are fearful because they can’t send their girls out to the shop because they are scared that something like this will happen. He should get no bail. If he gets bail we are going to kill him ourselves.”