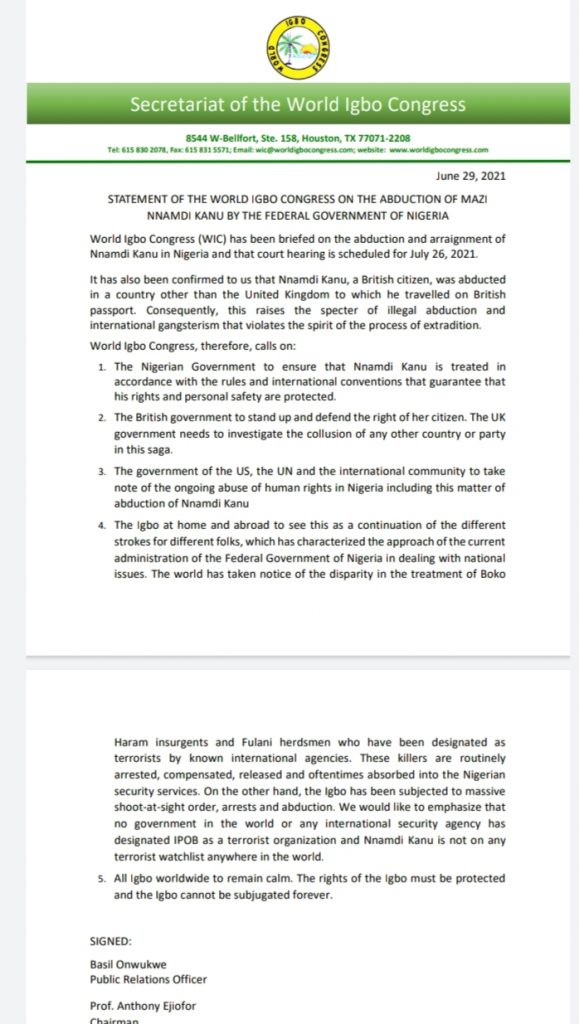 The World Igbo Congress (WIC) has described the abduction of Mazi Nnamdi Kanu, the leader of the Indigenous People of Biafra, IPOB by the Nigeria Government and her Security Operatives, as illegal and one that breaks the law guiding the process of extradition.

The group decried the method deployed by Nigeria security on the leave of the federal government, to abduct the leader of the freedom fighter, who has been clamouring for a final separation from the Nigeria nation and restoration of the Sovereign State of Biafra.

In a press statement co-signed by Prof. Anthony Ejiofor and Basil Onwukwe, the Chairman and Public Relations Officer of the association, respectively, the group charged the Buhari led administration to ensure that Kanu is treated with strict adherence to the “rule and regulation both of international convention that guarantees that his life and personal safety”, it stated.

It would be recalled that the Attorney-General of the Federation and Minister of Justice, Mr. Abubakar Malami(SAN) had on Tuesday, June 29 informed Journalists about how Kanu was arrested in Kenya and brought back to Nigeria on Sunday.

Malami further disclosed that the arrest was carried out through a collaborative effort between security agencies in Nigeria and the Interpol.

In addition, Malami revealed that Kanu would be taken before the Federal High Court in Abuja for continuation of his trial on charges bordering on terrorism, treasonable felony, unlawful possession of firearms and management of an unlawful society.

However, Kanu’s abduction and arraignment in court come 26th of July, has thrown the entire nation and other sister countries in disarray, as many groups have been calling for justice to end the unholy act by the federal government.

To this effect, World Igbo Congress, who implored the US, UN and the International Community to stand up in defense of Kanu, reminded the Government of Nigeria to realize that their abductee is a citizen of the United Kingdom, even as they warned that he, (Nnamdi Kanu) should be treated by the rule and regulation of both International Convention that guarantees his life and safety.

In a statement read in detail:

“World Igbo Congress has been briefed on the abduction and arraignment of Nnamdi Kanu in Nigeria and that court hearing is scheduled for July 26, 2021.

“It has also been confirmed that Nnamdi Kanu, a British citizen was abducted in a country other than the United Kingdom to which he traveled on British passport. Consequently, this raises the specter of illegal abduction and international gangsterism that violates the spirit of the process of extradition.

“The Nigeria government to ensure that Mazi Nnamdi Kanu is treated by the rule and regulation both of international convention that guarantees that his life and personal safety”.

‘The British government to stand up and defend their citizen. The UK government to investigate the collision of any other country or party in this matter.

Also, The government of Us, the UN and the international community to take note of the ongoing abuse of human right in Nigeria, including this matter of abduction of Mazi Nnamdi Kanu.”

We urge the Igbo home and abroad to see this as a continuation of different strokes For different folks.

” The rights of the Igbo must be protected and the Igbo can not be subjugated forever “.

Below is a copy of the statement: