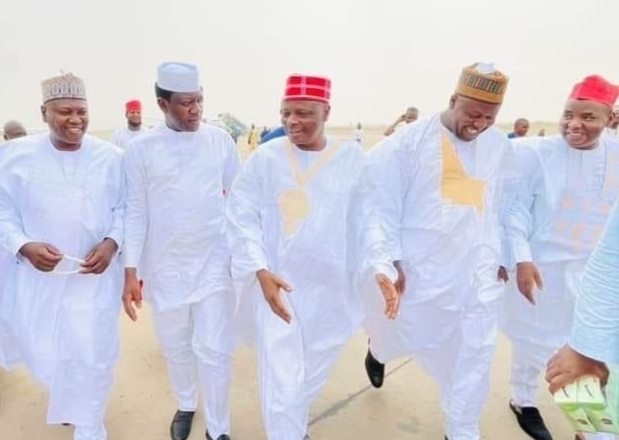 Abdulmumin Jibrin, a former house of representatives member and director-general of the Bola Tinubu support group, on Friday, held a meeting with Rabiu Kwankwaso, former governor of Kano.

Kwankwaso is also a presidential hopeful on the platform of the New Nigeria People’s Party (NNPP).

During the last weekend, Jibrin had announced that he was leaving the All Progressives Congress (APC) and would announce his new political party subsequently.

Abdullahi Ganduje, Kano governor, had made an attempt to stop the former lawmaker from leaving the party, but it isn’t clear if the move yielded anything tangible.

The grievance of Jibrin is centred around who will represent the Kiru/Bebeji federal constituency on the platform of the APC at the 2023 polls.

He had represented the constituency in the eighth assembly, and won re-election in 2019, but was sacked by the court.

On Friday, the former lawmaker was seen lifting the insignia of the NNPP — a fruit basket — at the home of Rabiu Kwankwaso, a national leader of the party.

Afterwards, Jibrin and other NNPP stakeholders went into Kwankwaso’s home for a meeting.

Details of the meeting are still sketchy, while the former lawmaker is yet to give an official update on if he had defected to the NNPP.

Meanwhile, Ibrahim Shekarau, a former Kano governor, is also rumoured to be making plans to join the NNPP.