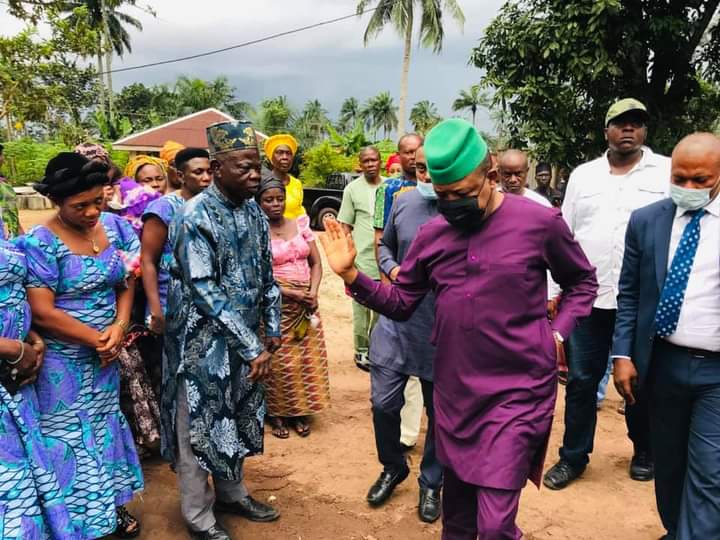 “The death of Hon. Obinna Onuama, your son, my own brother and Chairman of Aboh Mbaise Chapter of the Peoples Democratic Party, PDP, came as a rude shock to me, PDP family and Aboh Mbaise people”.

Those were the pathetic words of Rt. Hon. Ihedioha when he paid a condolence visit to the family of Engr. Obinna Onuama in Eziala Lorji, Aboh Mbaise LGA.

While speaking to his wife, aged mother and siblings, Hon Ihedioha described the late Obinna as a long standing political associate. “I don’t think there is anybody here apart from his wife, who was deeply affected by Obinna’s death than me, because Obinna has worked with me closely for a very long time, infact Obinna is like my son. You can rest assured of my support to this family.” He assured.

He noted that the PDP family has already set up a burial planning committee that is working with the family to give the deceased a befitting burial.

Speaking on behalf of the party, the State Deputy Chairman of the Peoples Democratic Party, Sir Martin Ejiogu maintained that Hon. Onuamah served the Party diligently with great zeal and commitment.

Responding, his wife, siblings and uncle in their separate speech, thanked Hon. Ihedioha and the PDP for their show of love and solidarity during this trying moment.

Meanwhile, Ihedioha was received by party officials and members from Lorji Ward and Aboh Mbaise. Special prayers were offered for the repose of the departed who will be laid to rest on Wednesday 20th October 2021 at his country home.