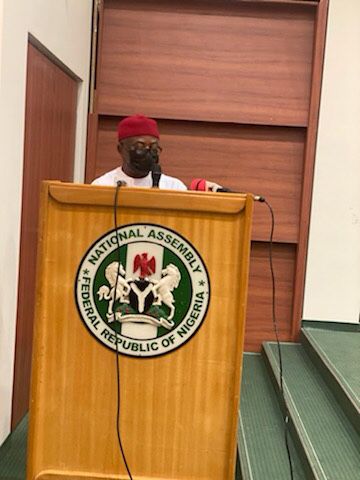 Representative Sam Onuigbo, the member representing Ikwuano/Umuahia North and South Federal Constituency says has revealed that Lawmakers have a rich history, capable of creating the policy and legal frameworks that can drive renewable energy deployment of a nation.

Onuigbo who described Legislatures as indispensable arms of the Government, reiterated that the critical roles of the latter all over the world, in enhancing an effective governance, cannot be overemphasized.

The President, (Africa) Global Legislators Organization for a Balanced Environment (GLOBE) International opined that International organizations had begun to take cognizance of the
critical role of the legislature, adding, “and how this can be leveraged on to accelerate global efforts towards clean energy and sustainable development.”

Speaking, he said: “One of the most obvious examples is the UNFCCC’s recognition of the Parliamentary Group as part of its informal constituency. This critically positioned parliamentarians in discussions and negotiations on issues relating to Climate Change, renewable energy and sustainable development.

“A further proof of this is the launch during COP26, of the Climate Parliament, and International Solar Alliance’s Green Grids Initiative— One Sun One World One Grid— which aims at building the key infrastructure needed to provide clean energy for the world by building critical continental grids. In doing this, it was made clear the key role of legislators in achieving this remarkable feat.”

Odozio-Obodo who outlined the basic roles of the Legislators as enshrined in the Constitution, commended fellow Legislators for their increased, impactful efforts towards driving for a clean energy transition.

Hear him: “The Legislators have the following important roles to play in enshrining regulatory measures to accelerate energy transition and sustainable development:

“Domesticating and giving the force of law to international commitments that will help their respective countries accelerate the transition to clean and renewable energy and sustainable development.

“Champion the formulation of policies that will nudge the government on the right path. This could come in the form of tax holidays, interest-free loan schemes, decentralization of energy generation and distribution in the country, etc. In essence, legislators play the important role of creating a conducive environment for accelerating sustainable development and clean energy generation and distribution.

“Enactment of legislation that will help advance the drive towards sustainable development and renewable energy. In Nigeria, we took an important step in doing this by getting the passage of the Climate Change Act (which I sponsored) by the two chambers of the Nigerian National Assembly, and assent by the President on November 18, 2021. We intend to continue to push for its implementation and hopefully enact more laws to drive our transition to renewable energy. In the same vein, we will continue to provide support for policies geared towards the attainment of these objectives.

“As far back as 2017, former IRENA Director-General Adnan Z. Amin opined that “Lawmakers have a rich history of creating the policy and legal frameworks that can drive renewable energy deployment. Their role is even more critical as governments look to transform their energy infrastructure and markets.”

“This is absolutely true and I am happy that over the years, legislative efforts towards driving for a clean energy transition have increased. We must continue to rally ourselves, provide peer-education where and when necessary, and sustain action.”