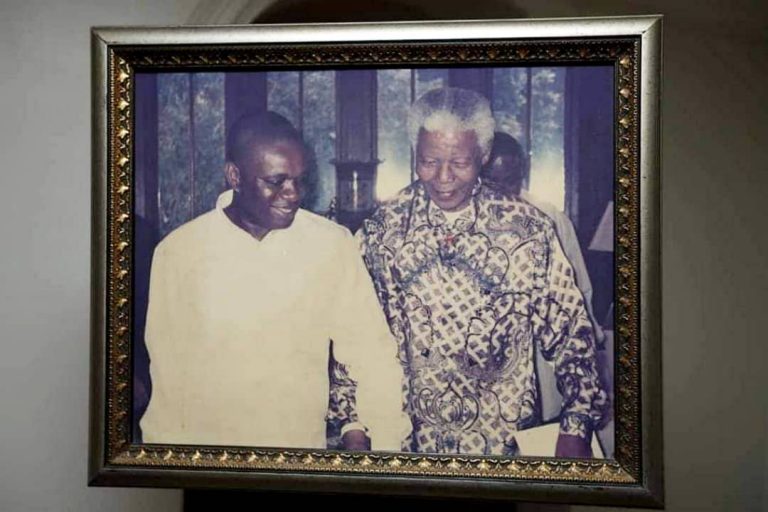 The former South African leader who led the anti-apartheid  revolution is reported to have been a Mentor to Kalu  the current Chief Whip of the 9th Senate.

Although the exact year in which the photo was taken could not be ascertained, however it is reportedly taken in 1997, the framed photograph pictures both leaders engaging in a discussion.

Orji Kalu who currently represents Abia North Senatorial district maintained a close relationship of over 20 years with the first president of South Africa (1994 to 1999) until his demise in December 2013.

The former Abia Governor was once quoted to have said that being a mentee to the late foremost African leader he was tutored and shaped into a responsible, industrious and disciplined man , stating that Mandela set a challenging example to other African leaders by retiring after a single term as South Africa’s president.

Senator Orji Uzor Kalu also said he learnt his forgiving spirit, despite everything he has gone through in the hands of his adversaries, yet, he has forgiven them wholeheartedly.
Kalu was under the tutelage of Nelson Mandela. Madiba, who spent 27 years in prison , came out and became president, forgave those whites who put him in jail.

Similarly Orji Kalu stated in a recent interview on ChannelsTV disclosed that he had forgiven all those who contributed to his unlawful six months incarceration at the Kuje Custodial Centre in Abuja.

In 2007 Kalu’s relationship with Mandela paid off for Nigeria during a struggle led by Orji Kalu to stop the move for an amendment of the Nigerian constitution by former President Olusegun Obasanjo to enable him seek a third term in office.
Senate Chief Whip, Dr. Orji Uzor Kalu, on Thursday revealed how the late South African leader, Nelson Mandela, put pressure on former Nigeria President, Olusegun Obasanjo, to drop his third-term presidential agenda.
Giving an account Kalu revealed that Mandela played a crucial role in ensuring Obasanjo abandoned the idea of amending the Constitution, to enable him contest for a third term in office.

A Quote credited to Orji  Kalu reads;
“I recall my personal interactions with him (Mandela), especially during our national struggle to force President Olusegun Obasanjo to drop his plan to amend the Constitution of the Federal Republic of Nigeria and secure an extension of his tenure.

“Disturbed by the details, Mandela placed a call to President Olusegun Obasanjo and told him in clear terms that whatever his plans were, it was neither desirable for Africa.

“That intervention proved strategic to the leadership question in Nigeria at the time, leading to elections in 2007,” Kalu said.

However, Obasanjo’s failed third term agenda signalled the beginning of Orji Kalu’s travails with the cancellation of his business licenses by Obasanjo’s Government which included; Hallmark Bank and Slok Airline which at that time had over 9000 workers .

Kalu’s confrontation with Obasanjo also led to the institution of corruption allegations against him by the Federal Government’s Economic and Financial Crimes Commission (EFCC).