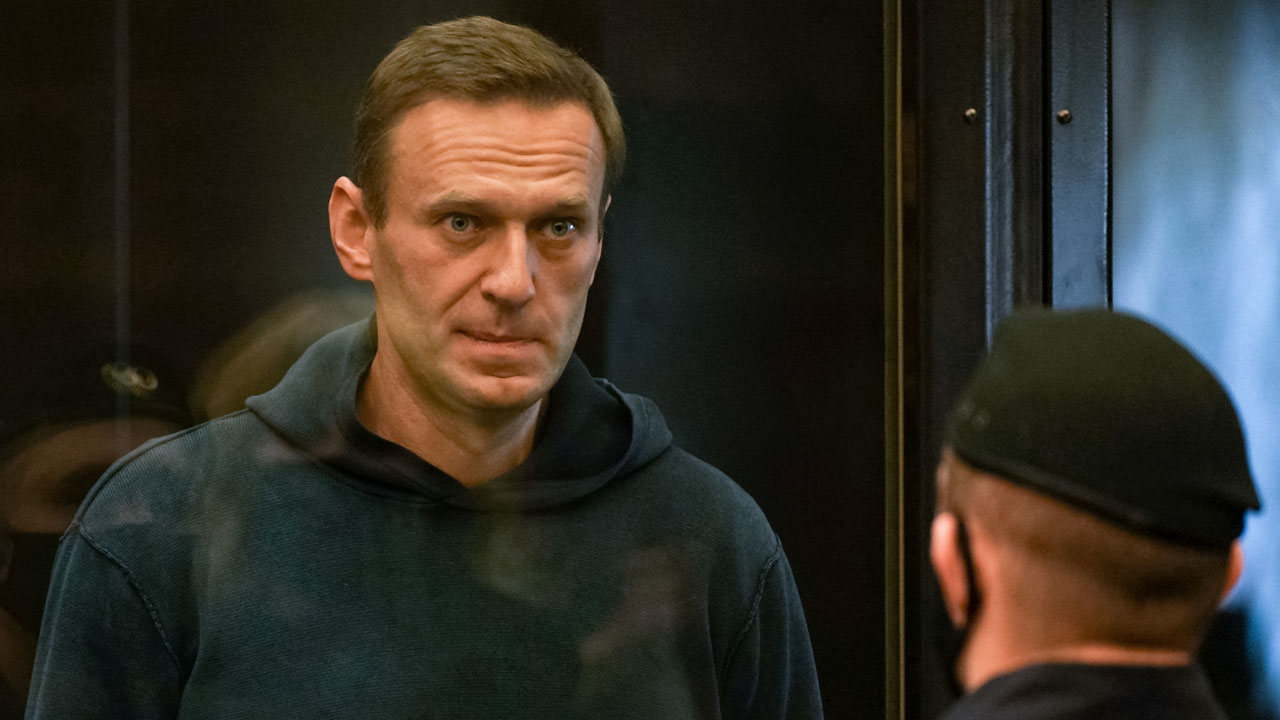 Russian opposition leader Alexei Navalny, charged with violating the terms of a 2014 suspended sentence for embezzlement, stands inside a defendants’ cage during a court hearing in Moscow on February 2, 2021. (Photo by Handout / Moscow City Court press service / AFP) /

A Moscow court on Tuesday began hearing whether jailed Kremlin critic Alexei Navalny should face several years in prison, after his arrest, last month triggered protests across Russia and a massive police clampdown.

Tens of thousands have taken to the streets of Moscow and other cities over the last two weekends to protest against the arrest of the 44-year-old anti-corruption campaigner.

Police have arrested thousands at the protests and on Tuesday detained more people outside the Moscow courthouse, where a judge will decide if Navalny should be sent to prison for violating the terms of a three-and-a-half-year suspended sentence he was given in 2014.

The case is presenting one of the most serious challenges to the Kremlin in years and has led to calls for new Western sanctions against President Vladimir Putin’s government.

An AFP journalist inside the building, where reporters were allowed to watch a video feed of the proceedings from a separate room, said the hearing had begun with Navalny present.

He demanded that journalists be allowed inside the courtroom.

There was a massive security presence outside the building after Navalny’s team had urged supporters to gather for the hearing.

OVD Info, a group that monitors arrests and opposition protests, said that 26 people, as well as journalists, had been detained.

Navalny was detained on January 17 when he returned to Moscow from Berlin, where he had spent months recovering from a nerve agent poisoning in August that he blamed on Putin.

Anti-corruption investigations
He is charged with violating a 2014 suspended sentence for embezzlement by skipping out on check-ins with Russia’s prison service while in Germany.

The case saw Navalny spend one year under house arrest as part of his three-and-a-half-year suspended sentence and his brother Oleg serve the entire time in jail.

His lawyers told AFP he now faces up to two years and six months in prison as he had already served the year under house arrest.

Navalny, who in the last decade has emerged as Putin’s most prominent domestic critic, and his allies believe the 2014 case was retribution by the authorities for his political activities. They say the Kremlin is now repurposing it to muzzle him.

While he has never held elected office, Navalny has made a name for himself with anti-graft investigations exposing the wealthy lifestyles of Russia’s elite.

Two days after he was placed in pre-trial custody last month, his team released an investigation into an opulent seaside property Navalny claims was given to Putin through a billion-dollar scheme financed by close associates who head state companies.

The probe was published alongside a YouTube video report that has garnered more than 100 million views.

Navalny’s arrest and the corruption claims spurred nationwide protests over the past two weekends, including on Sunday when police shut down the centre of Moscow and detained more than 5,400 people in a single-day record.

His arrest and the mass detentions during street protests have triggered a wave of condemnation from the West.

The United States and the European Union have called for Navalny’s immediate release and denounced police violence on demonstrators.

EU foreign policy chief Josep Borrell is expected to raise the issue of Navalny during a visit this week to Moscow.

Kremlin spokesman Dmitry Peskov has responded by saying the case is a “domestic affair” and that “we will not allow anyone to interfere in it.”

COVID-19: Seychelles ranks 3rd in the world for percentage of population vaccinated

Why some US churches are still open this...

Alveda King: Our skin colors are supposed to...