Murdered Lady In Ebonyi Hotel: We Partied In The Hotel With her… Ugochi’s friend reveals … She Stayed Back Because Some Men Priced Her N50k 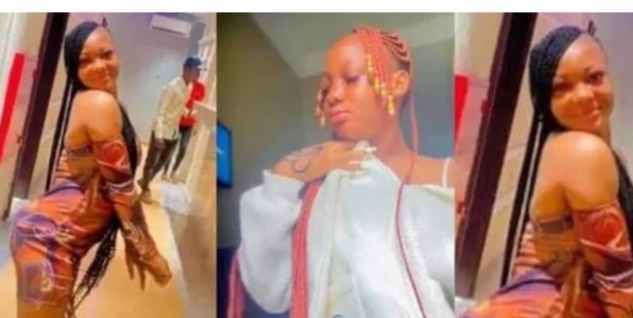 UgMurdered Lady In Ebonyi Hotel:
We Partied In The Hotel With her… Ugochi’s friend reveals
… She Stayed Back Because Some Men Priced Her N50k

Shocking story of how a 20-year-old girl was promised N50,000 before being murdered in Ebonyi hotel room, vital parts missing

One of the female friends of late Ugochi who pleaded anonymity said: “After we partied in the hotel with Ugochi, we decided to go home but Ugochi decided to stay back because some men priced her N50,000 to spend the night with her.

“They priced me N100,000 but I refused because I don’t know them. I lied to them that my boyfriend was in town and so, I will not be able to spend the night outside my home.

“We warned Ugochi not to follow them but she refused because of the money. So, we left her behind and went home. When we didn’t see her the next day, we went to the police and reported the matter.

Don’t lack intellectual insight, there are better days ahead of you.

It could be recalled that the lifeless body of a lady suspected to be in her late twenties and identified as Ugochi Nworie, was on, Wednesday, April 4, found dead in a hotel room (name withheld), located on Mgbowe Street, Abakaliki, the capital city of Ebonyi State.

Reportedly, neighbours hadclaimed that some group of young men had taken the lady to lodge in the hotel on Monday night and left unnoticed, only for her lifeless body to be discovered the next day.

A source told AIT that the victim was suspected to be tipsy when she arrived at the hotel.

Confirming the incident, Ebonyi State Police Public Relations Officer, DSP Loveth Odah, says preliminary investigations reveal that the deceased was ganged raped to death, as about 12 used condoms were found in the room.

Odah however, dispelled the rumour that the private parts of the lady were removed, explaining that no part of the deceased body was missing at the time her remains were picked from the hotel room.

The Ebonyi Police Command spokesperson notes that no arrest has been made yet, but efforts were on top gear to unravel and bring the perpetrators to book.