Israeli Prime Minister Benjamin Netanyahu on Wednesday urged new US President Joe Biden to “strengthen” a long-standing alliance between the two countries, partly to confront the “threat” posed by Iran.

“I look forward to working with you to further strengthen the US-Israel alliance, to continue expanding peace between Israel and the Arab world and to confront common challenges, chief among them the threat posed by Iran,” Netanyahu said.

The Israeli leader was speaking in a video congratulating Biden moments after he was sworn in as US president, replacing Donald Trump.

Netanyahu, who has referred to Trump as the “best friend” Israel has had in the White House, noted Wednesday that he had “a warm personal friendship going back many decades” with Biden.

Islamist movement Hamas, which controls the Gaza Strip, said it was “not sorry” to see Trump depart, calling him “the world’s main source and sponsor of oppression, violence, and extremism” and partner in “Israeli aggression” against the Palestinians.

Biden “must correct the wrong historical path of American policy which is oppressing our people,” and end policies aiming at “destroying the Palestinian cause”, said Hamas spokesman Fawzi Barhoum.

The Palestinian presidency lashed out at Netanyahu, who on Sunday announced that Israel approved 780 new settler homes in the occupied West Bank, ahead of a March general election.

All Jewish settlements in the West Bank are regarded as illegal by much of the international community.

– ‘Welcoming Biden with settlements’ –
But Trump’s administration, breaking with decades of US policy, declared in late 2019 that Washington no longer considered settlements as being in breach of international law. 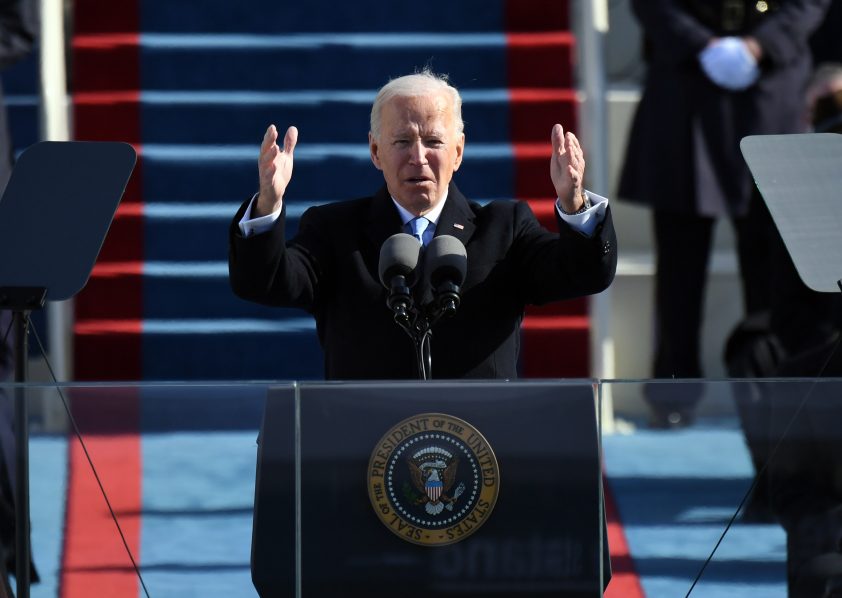 US President Joe Biden delivers his inauguration speech on January 20, 2021, at the US Capitol in Washington, DC. – Biden was sworn in as the 46th president of the US. (Photo by ANDREW CABALLERO-REYNOLDS / AFP)

“His only aim is to destroy the two-state solution.”

Under Trump, the United States also recognised Jerusalem as Israel’s “undivided” capital and moved its embassy there, sparking Palestinian outrage.

In his own reaction to Biden’s inauguration, Abbas said in a statement that “we are impatient to work together for the peace and stability of the region and the whole world,” declaring he was ready to open a peace process that meets the aspirations of the Palestinian people.

Jibril Rajub, a senior official from Abbas’ Fatah party, earlier said “we hope that the presence of Biden will be a chance to apply international law and resolve the conflict, establishing an independent Palestinian state and putting an end to the suffering of the Palestinian people.”

Trump’s administration also withdrew from the 2015 Iran nuclear deal and imposed tough new sanctions on the Islamic republic, Israel’s arch-foe — another move welcomed by the Jewish state, which encouraged Europe to follow suit.

But Biden’s nominee for Secretary of State, Antony Blinken, said Tuesday the incoming administration was ready to return to the deal as long as Iran respects its commitments.

The Jewish state has also reached a series of normalisation agreements with its Arab neighbours under the Trump administration.

Coronavirus: ‘Half of humanity’ under social distancing curbs