News At The Hour!!! Jubilation rocks Arochukwu as Sen Kalu empowers many, Bende, Ohafia, others 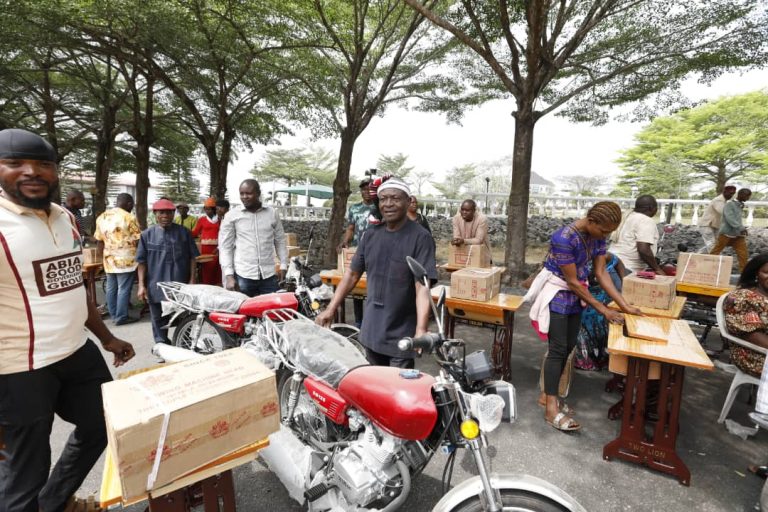 News At The Hour!!! Jubilation rocks Arochukwu as Sen Kalu empowers many, Bende, Ohafia, others

The jubilant beneficiaries from Arochukwu local government expressed their immense gratitude to Orji Kalu , according to them they earnestly awaited their turn to receive their own share of Kalu’s empowerment materials.

Abia-North Senatorial District made of five local government areas have in the past months benefited from a massive empowerment programme of Senator Orji Uzor Kalu aimed at boosting entrepreneurship and reducing unemployment.

The Arochukwu beneficiaries were provided with over 450 motorcycles, 500 sewing machines and other items to support their vocational trades.

Addressing the beneficiaries gathered at his Camp Neya , Igbere country home , Kalu stated that he has delivered on his assignment at the National Assembly.

Kalu tasked the joyous recipients to maximise the items to their economic advantage, the Senate Chief Whip advised them to emulate him stating that he began making money through the use of such items in his early days.

In his word ; “I don’t like people loitering outside my gate , my duty is to empower and make you productive to yourself and the community. In my first term at the Senate, our senatorial zone witnessed the kind of development it has never seen since it’s existence.

READ MORE:  The Era Of Sharing Frying Pan In Abia North Is Over, Group Cajoles Ohuabunwa

“We have reconstructed our schools, roads, clinics , given borehole water and so on. These items are meant for you to use and help yourselves, I advise you all not to sell it but use it to your advantage because if you do, you have sold your conscience.

In conclusion Kalu disclosed the next phase of empowerment will be focused on Agriculture.

Precious Ogendi Ngwu was full of praise for Orji Kalu , the Stakeholder in Arochukwu thanked Kalu for meeting up with the expectations of the people. According to him , empowerment was long awaited. Mr. Precious outlined the economic advantages of the items to the people while taking them to make good use of them.