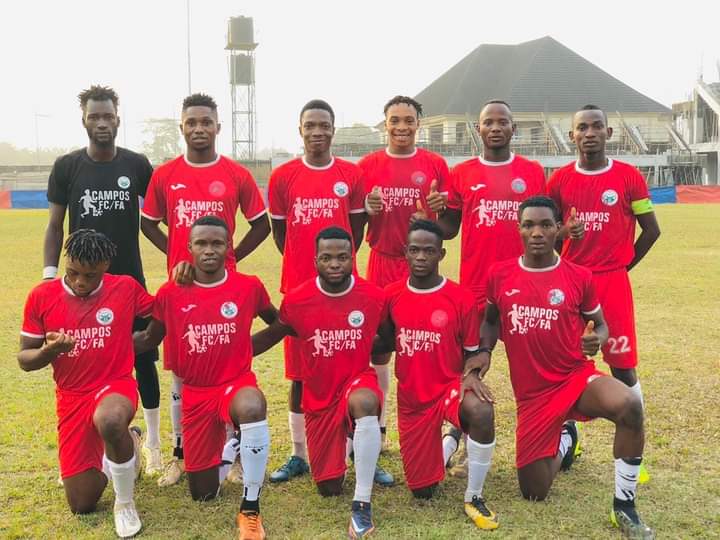 Considering their recent promotion to Nigeria National League Season (NNL) and their determination to execute the money sapping league efficiently and effectively, Mr Patrick Osuji, the President of Campos Football Club and Academy, Owerri has made a passionate appeal to Imo State Government (IMSG) and the general public for financial and moral support ahead of the league season that is most likely to commence on Friday 11th February, 2022.

Osuji pointed out that having been promoted to the second biggest league in Nigeria, it means more exposure for the club as well as more funds to bankroll the logistics involved in the process of taking part in the league.

To this regard, the players and crew wants to be very professional going into this league and has decided to call for financial and moral support from the State government, corporate organizations and public spirited individuals.

The government according to Osuji has shown green light with regards to support but taking into cognizance the slow process involved before funds can be released and having noted the short period involved before the commencement of the league, the fund raising from individuals and corporate organizations seems to be the best bailout option.

In his address the Club’s President said that “today we call on Imolites and people all over the world to come to our aid by supporting us, that’s the essence of this fund raising.
We have spoken to the government and they have given us green light but again we understand the bureaucratic bottleneck associated with government which often strangulates timely efforts.

But because of the date for the commencement of the league which is less than two weeks, and since Campos FC out of sheer hard work and determination vision got promoted to play in the NNL, it’s naturally fit and proper to solicit for support having solely carrying the burden alone since 1998, today see where we are, we are now in one of the biggest leagues in Nigeria but it is more capital intensive and I cannot afford to sponsor it alone.

It’s pertinent to know that for the mere fact of qualified to play the league the status is that both the players and the technical crew are now professionals and should be treated as so, moreso in view of our primary mission is grassroots discovery of bud talents and to get the youths off the streets and show cased them into limelight.

According to Osuji “now that we are achieving that milestones through this project, we now appeal to the general public for support. More especially financial support and as well come to the stadium to cheer us up when the league begins.

We are not saying people should bring in money for investment, but we are simply asking for support, no matter how little, any little financial support could go a long way.” he appealed.

The President passionately advised that, for those willing to assist the club in whatever capacity should contact him on 08032759171.
Or visit Campos FC academy to make their donations. You can equally pay into their Access Bank Account – CAMPOS SPORTS ACADEMY LIMITED, ACCOUNT NUMBER (NGN): 0774495510.