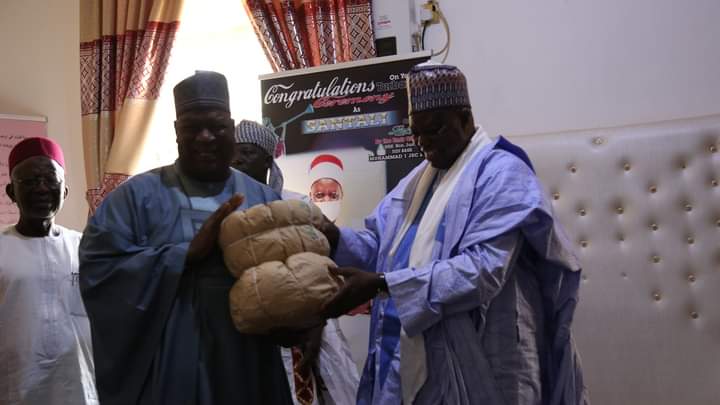 Former Secretary to the Federal Government of Nigeria, (SFG), Sen. Anyim Pius Anyim has reassured the Emir of Lafia, Hon. Justice Sidi Bage Muhammed 1, JSC Rtd and all well-meaning Nigerians that the country could be better again through the power of unity.

The former Senate President who has declared his interest in the forthcoming 2023 presidential election, gave this assurance today, Sunday, when he visited the 17th Emir of Lafian Barebari and Chairman Nasarawa State Council of Chiefs.

Senator Anyim, alongside his delegation received a grand reception from his hosts, as he described the day as a ‘red letter day’ in his life.

Anyim in his address expressed his desire to reposition the country to catch up with the future we will be proud of if given the opportunity.
” In the next few years, the type of employment we will be talking about will not be the type we are talking right now. And sir, we need to reposition this country to catch up with the future so that we can preserve the future for our children. That is what I stand for, that is what I want to bring on the table and that’s why I have come …”

Speaking with newsmen on the experience, he said:
“My experience at the palace will ever remain memorable. The palace drummers were mind blowing, particularly watching the dancers display their swords. It was a full royal reception for my delegation.”

Furthermore, Anyim, amidst immense joy, thanked me Royal father for his kind words particularly the royal blessings which were pronounced upon him and his delegation.

“His response to my brief address were words that came from the heart which he concluded with a touch of a Royal blessing.

“I cannot thank His Royal Highness enough for the inspiration of a greater Nigeria I drew from his speech today. Let me again assure His Royal Highness and all well meaning Nigerans that together we shall make Nigeria great again.

The Royal father in his remarks assured Anyim of his Royal partnership.

” I want to assure you that I will not be part of the people that will discuss those issues that will not matter. We shall educate our people. I wish you well in your endeavors”.

Earlier, the Royal father commended the former SFG for his visit to his palace, as he prayed for God’s blessings, protection and preservation upon him in his vision to make better the country.

Meanwhile, highlight of the event was the presentation of Royal Gift from the First Class Traditional Ruler to Sen. Anyim.