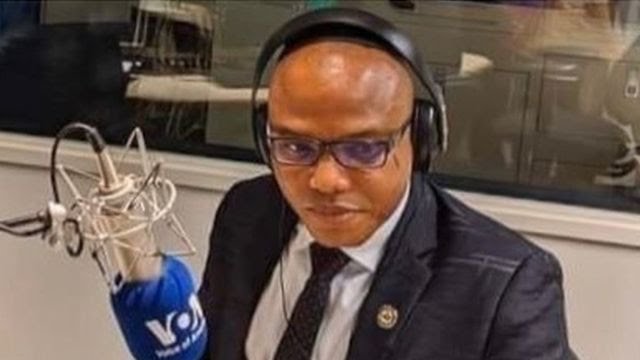 Leader of the Indigenous Peoples of Biafra, IPOB,Mazi Nnamdi Kanu, has reiterated his readiness to lay down his life in his unflinching quest to actualize the restoration of the sovereign state of Biafra.

Kanu made the declaration Thursday evening in a live interview with veteran journalist and publisher of the popular Ovation Magazine, Dele Mamodu, stating blankly that he is not afraid of death because he is already a dead man.

Kanu who restated his commitment to push through his efforts towards realising a sovereign state out of a sovereign country, maintianed that he would never stop for fear of death, whatsoever.

According to Kanu, “I am already dead and awaiting to be resurrected by the birth of Biafra.”

Continuing, he said: ” I’m dead already. I’m only waiting to be resurrected by Biafra. How can I be afraid of death when my people don’t have freedom. I was born to liberate people in bondage and that I must actualise.”

Asked if he felt very secure in Britain where he is taking refuge, he said he was not taking anything for granted, but added that Israel  provided Him with security.

Kanu debunked the rumour  that Radio Biafra is a pirate radio as is being argued, and vowed that the popular radio would in a fraction of time,  begin live transmission in Daura, President Muhamnadu Buhari’s home town.

The decision he insisted would be a proof that the Nigerian authorities lacked  the technological known how to kill Biafra.

Kanu explained that the radio transmitter being used by the station was built by Biafran, boasting that Biafrans have the technological ingenuity to run.

He further explained that the fear of the White Man especially Britain and their opposition against Biafran emergence is that it would herald the ingenuity of the black race.