by FAMOUS REPORTERS December 7, 2020 0 comment 11 views
Kindly Share This Story
By Charity UwakweThe book, ‘Obodo… Tears with A Smile’ authored by Dr. Ugo Ezeribe (D’ Prince), the Executive Secretary to the Member respresenting Ikwuano state Constituency, in Abia State House of Assembly, Hon. Stanley Nwabuisi, has been described as an eye opener for Nigerians as it exposes some hidden facts about the nation.
Reportedly, the 80 paged book which comprises 16 chapters, which was written in 2007 was far back previewed and forwarded by the famous Nigerian Novelist, Poet, late Prof. Chinua Achebe before death laid its bloody hand on him, in the year 2012/2013 and other American scholars 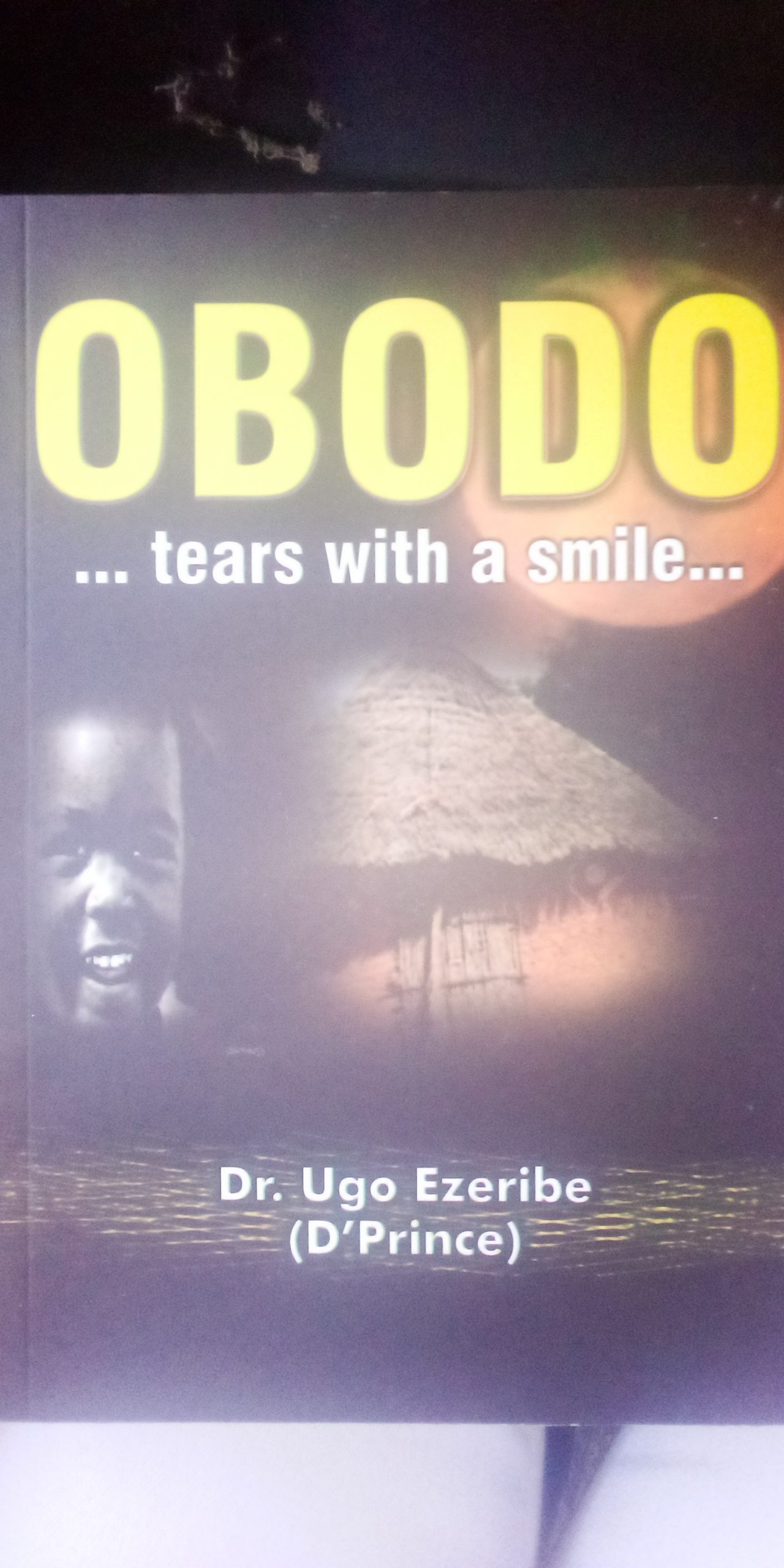 In his preview, Prof. Achebe urged Nigerians and the entire world in general to preserve the history of their father land for the sake of posterity.

He said: “I am enjoying reading your work. It sound so much like some of the thoughts in my head. I hope the world would appreciate this painstaking effort of yours in preserving the history of a nation for posterity sake. Keep the fire but I. I’m sending your foreword shortly”, he wrote.Corroborating, at the official launch of the book: Obodo… Tears with A Smile, Weekend, at Chaiseworld Hotel, Umudike, weekend, in Ikwuano LGA of Abia, the book Reviewer, High Chief Martins Ugorji of Okwu- Olokoro, in Umuahia North LGA, pointed out that the novel  though short would provide everyone who reads it with inspirations. 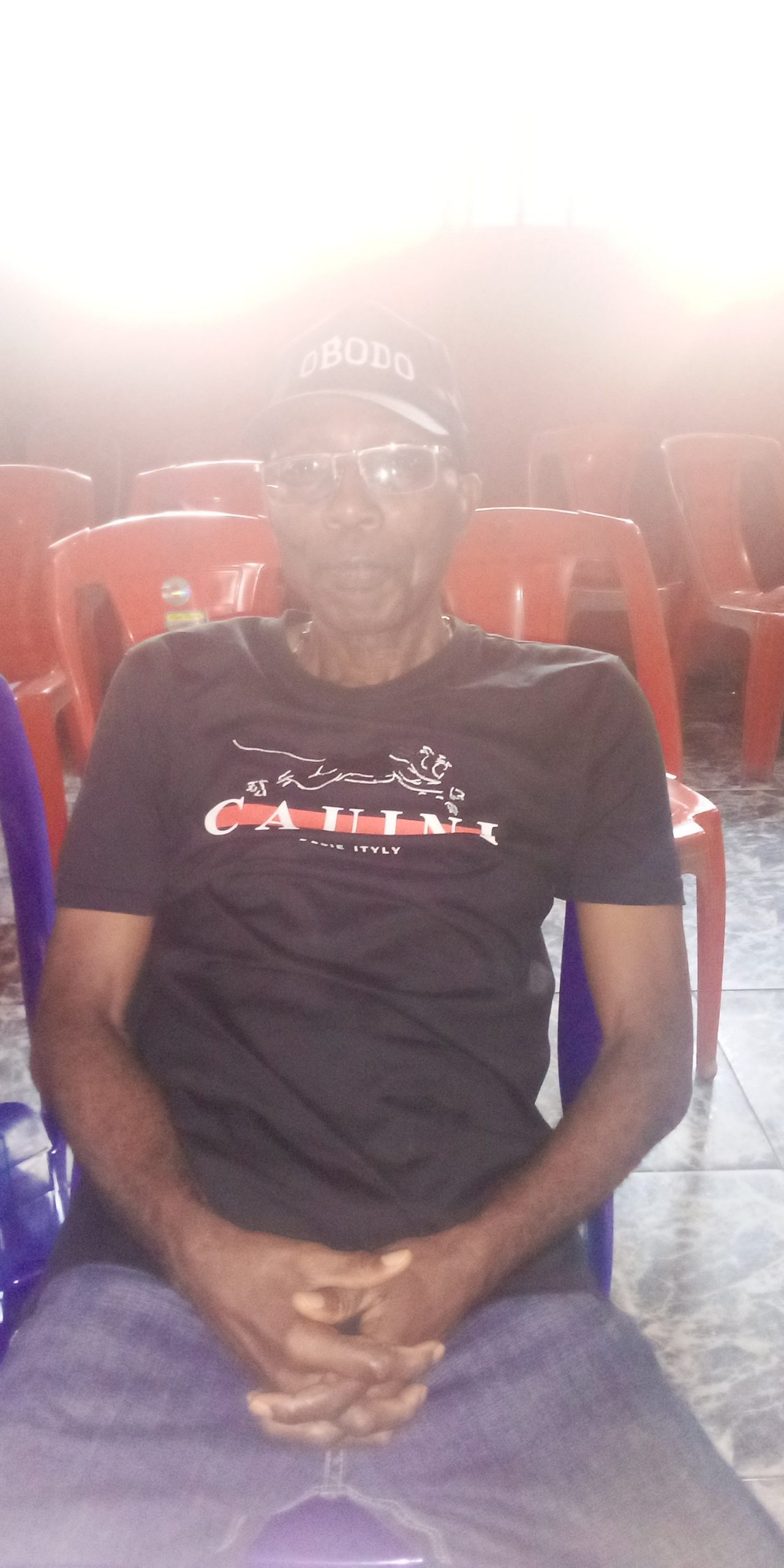 In his words: “The book is beautiful and it will go places. Anybody that reads it will get a lot of inspirations, and will know a lot about our country.”However, Chief Ugorji regretted
that quest for knowledge in the Nigeria society had over the years, evidently gone into extinction thus resulting in downright ignorance and misinformation.He, therefore, charged Nigerians to inculcate the habit of reading as this, he maintained, would in no doubt bring to their doorstep lots of hidden facts particularly about the Nigeria nation and the world in general. 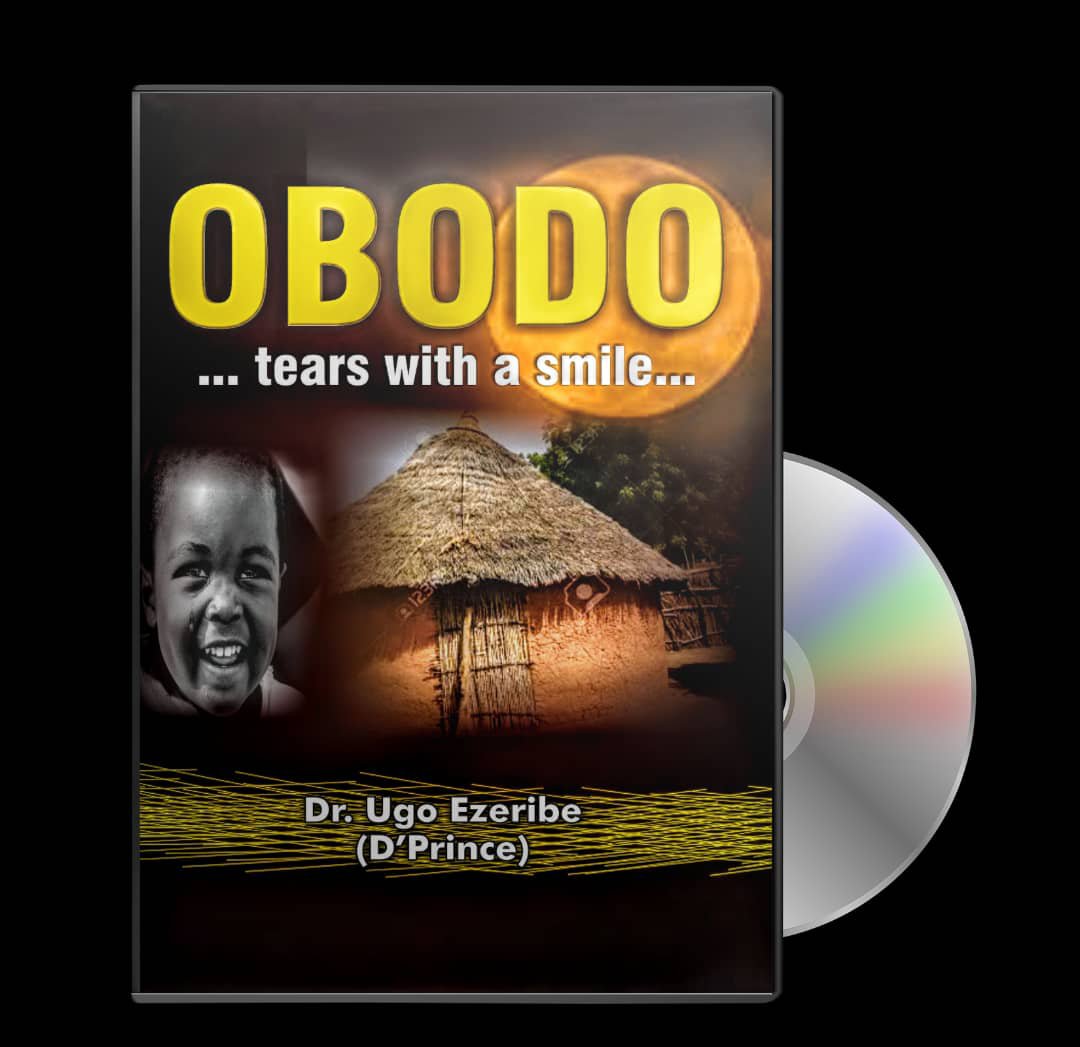 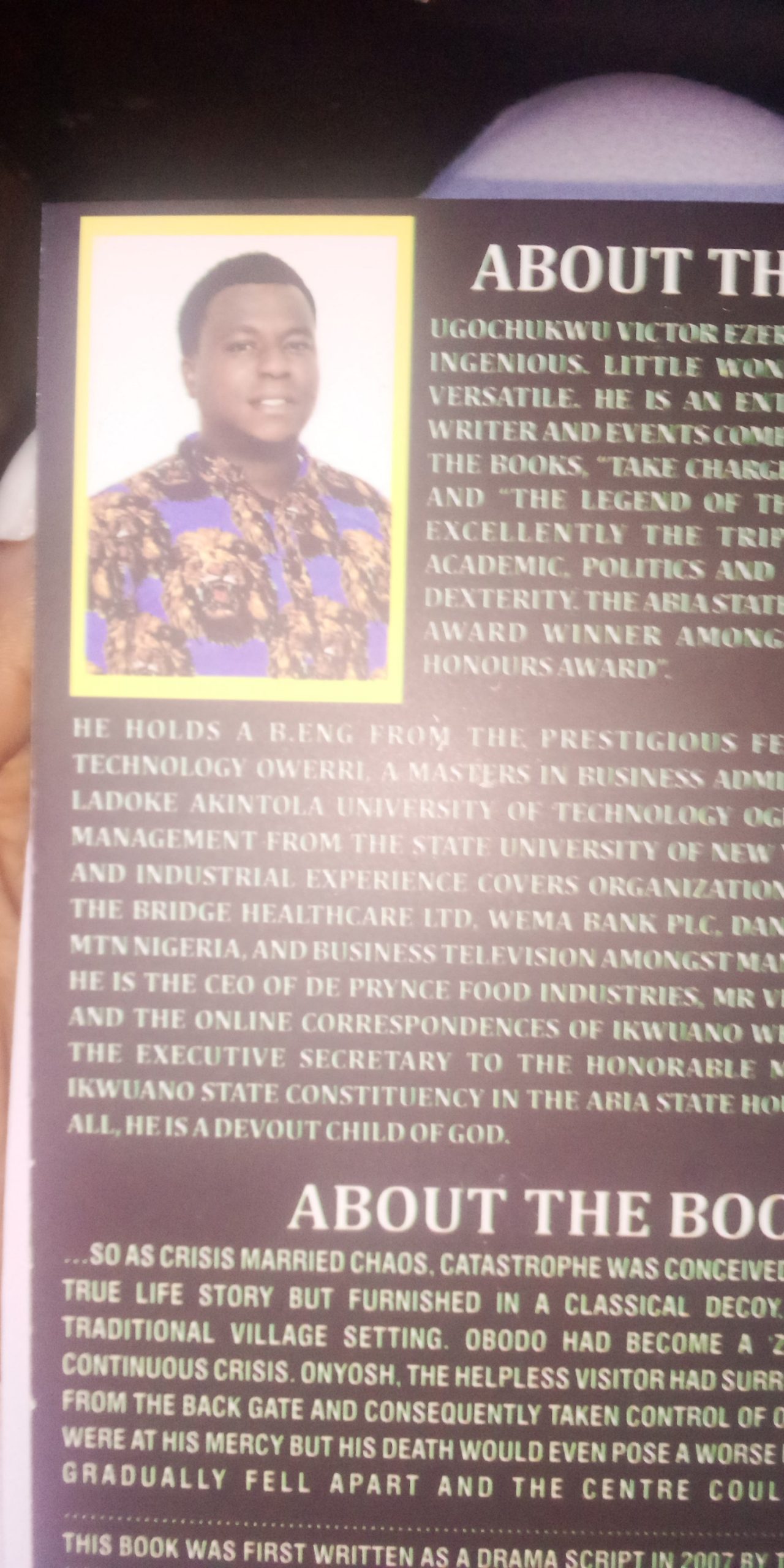 “Both the younger ones and adults should all read because you discover a lot of things hidden within the pages of a book. So we must change our reading culture”, he advised.Meanwhile, he described the Author as a versatile person, adding that “for him to have created time to put together that story, it’s fantastic and the fact that Chinua Achebe previewed the book before he died is something to be proud of.
According to him, the book Obodo gives insights on the history and culture of the Nigeria nation, lamenting that “when the white man left, we did not take over our wealth and the country is going down. So, it’s our duty to bring it back up and enthrone it”, he wailed.He, therefore, urged Nigerians to embrace good leadership and followership, while insisting on an end to the existing independency on the white man, noting that it will expedite the zeal to recover the long lost glory of the country.”Let us be independent on white people; let believe in ourselves and use the resources that God has endowed us with and Nigeria and indeed Africa will be great”, he advised, as he used the medium to call for the unalloyed support of Abians and all well-meaning Nigerians to facilitate the publication of the other two books in the series.In his contribution, Chief Sam Onuigbo, the member respresenting Ikwuano/ Umuahia Federal Constituency
commended the author for the outstanding feat arguing that one could still fulfill one’s God-given destiny without involvement in politics. 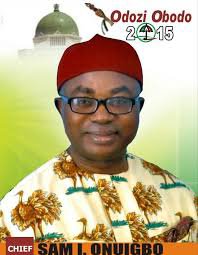 Chief Onuigbo, represented by Prince Henry Eleogu, the Judge of Olori Customary Court and a former Ikwuano Council boss decried the attitude of the present day’s youths whom he noted had made little or no efforts towards harnessing their hidden potentials. 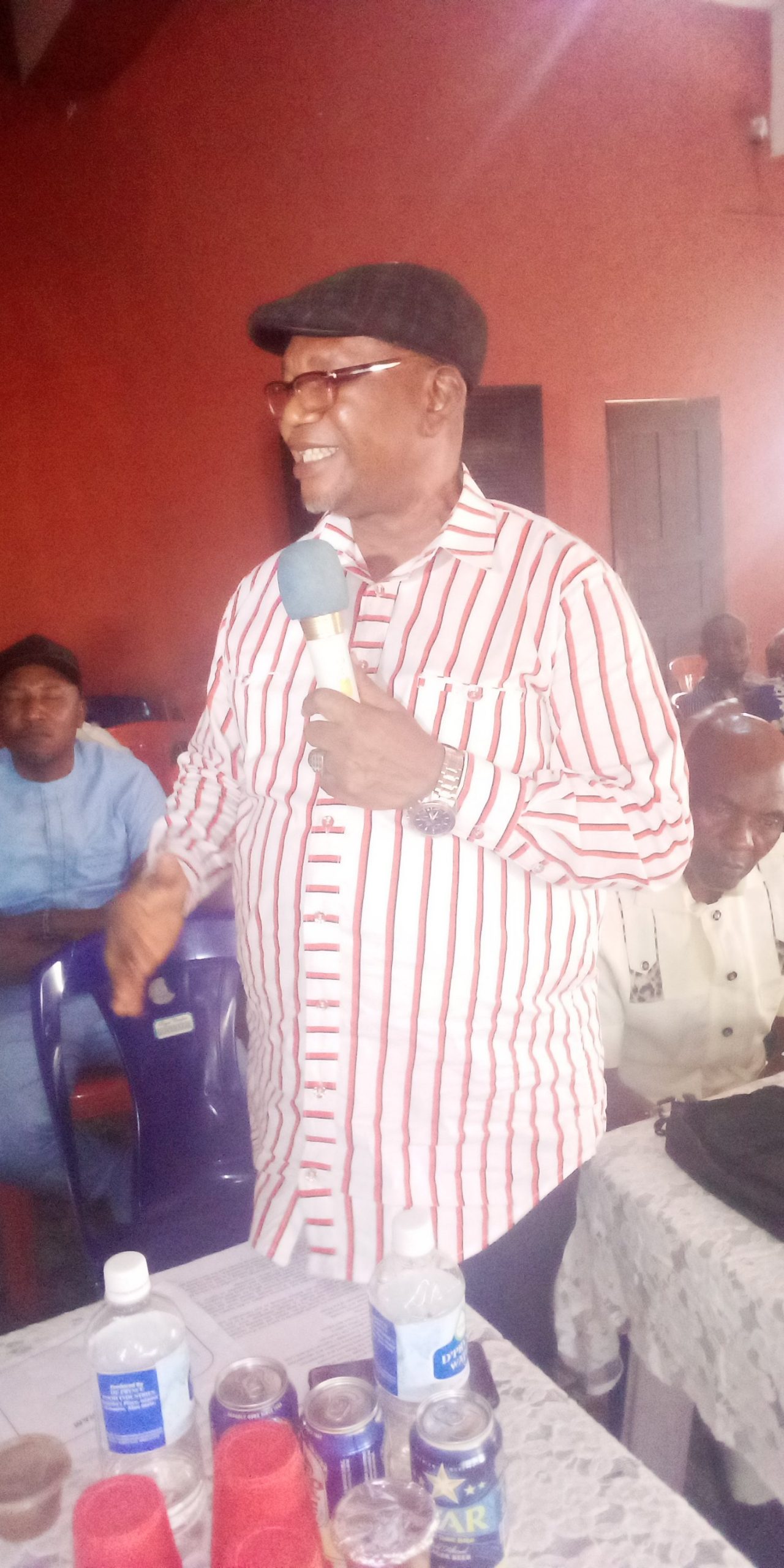 Hear him: “We’re proud of you, D’ Prince because have carved a niche for yourself. You have distinguished yourself from other youths. They come out of school; they don’t want to do anything but get involved in politics but it’s not that. You have proven that outside politics, one can still be what God says he should be. I commend you so much for this integrity, the prowess and steadfastness in assuring that your idea produces this great work. Remember, idea rules the world. By putting down this book, you have carved a niche for yourself.”In her remarks, Popular Nollywood actors, Brenda Eve Ndukwe (Akwaugo) a.k a. Mama G Jnr. of Oboro, in Ikwuano LGA of Abia State applauded Dr. Ezeribe for his writing prowess, describing him as a source of encouragement and inspiration for the teaming youths and the society in general, as she implored him to ‘keep the flag flying’. 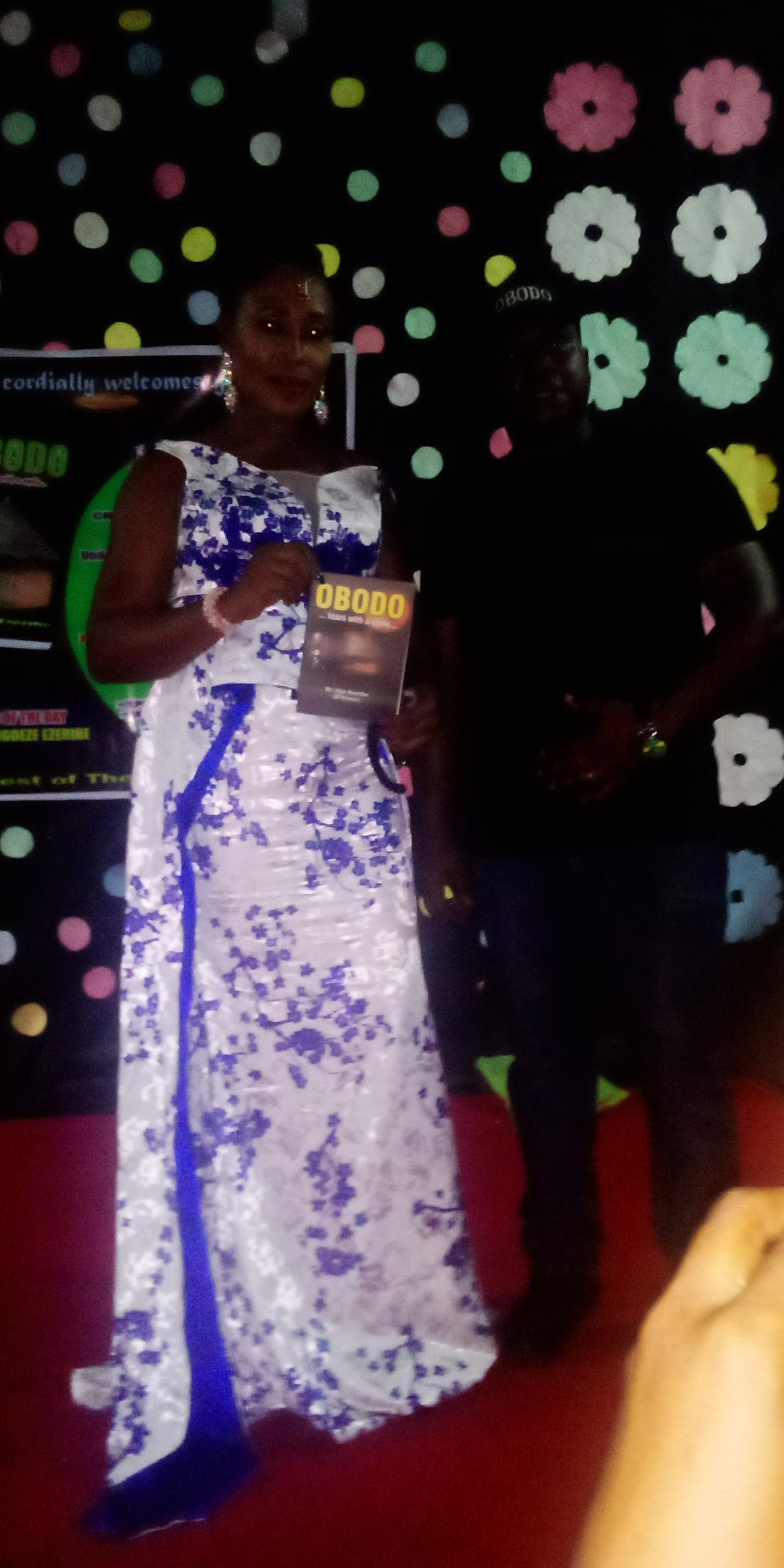 The Financial Secretary of  Actors Guild of Nigeria, Delta State, described Ezeribe as an embodiment of knowledge, while enjoining other youths to emulate him, saying, “I congratulate you, Dr. Ezeribe for this magnificent achievement and I urge you to keep it up. I pray for more knowledge and God’s grace to be able to put up more work. You have always had a way of doing things and doing them right. You’re a true son of Ikwuano and we’re proud of you, Dr. Ugo”, she added. 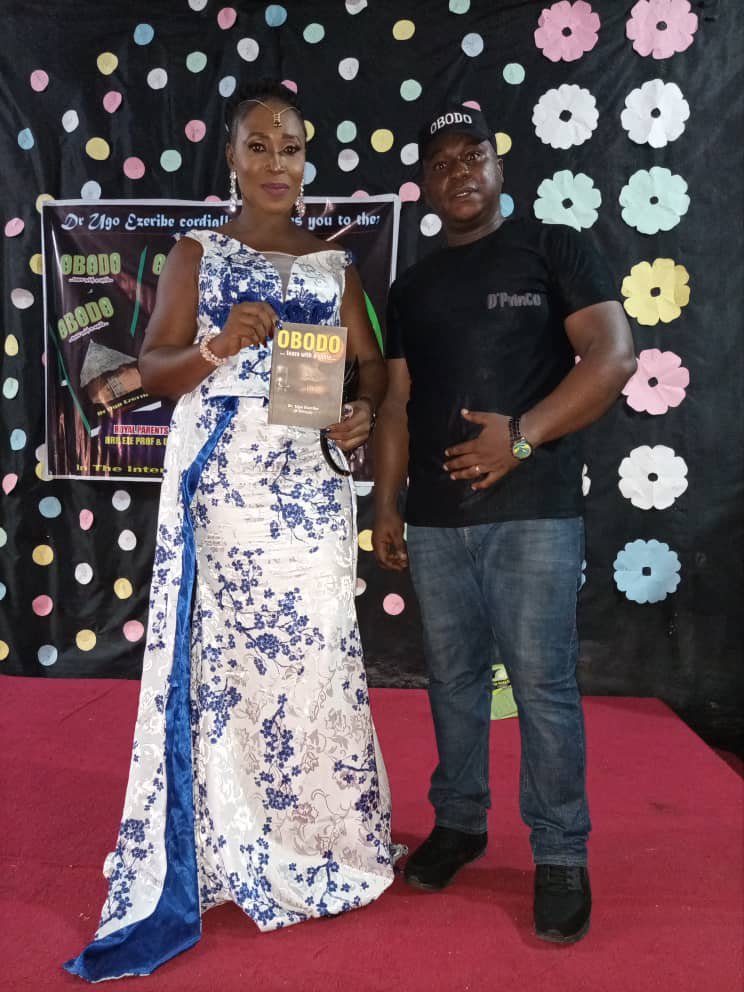 Earlier in an exclusive chat with Famous Reporters, the prolific writer and proud son of Isiala Oboro, in Ikwuano LGA, without mincing words blamed the apparent deficiency
in the reading culture of the younger generation which evidently has eluded them vital knowledge, on the existing poor educational system of the Nigeria society instigated by the deplorable state of the country. 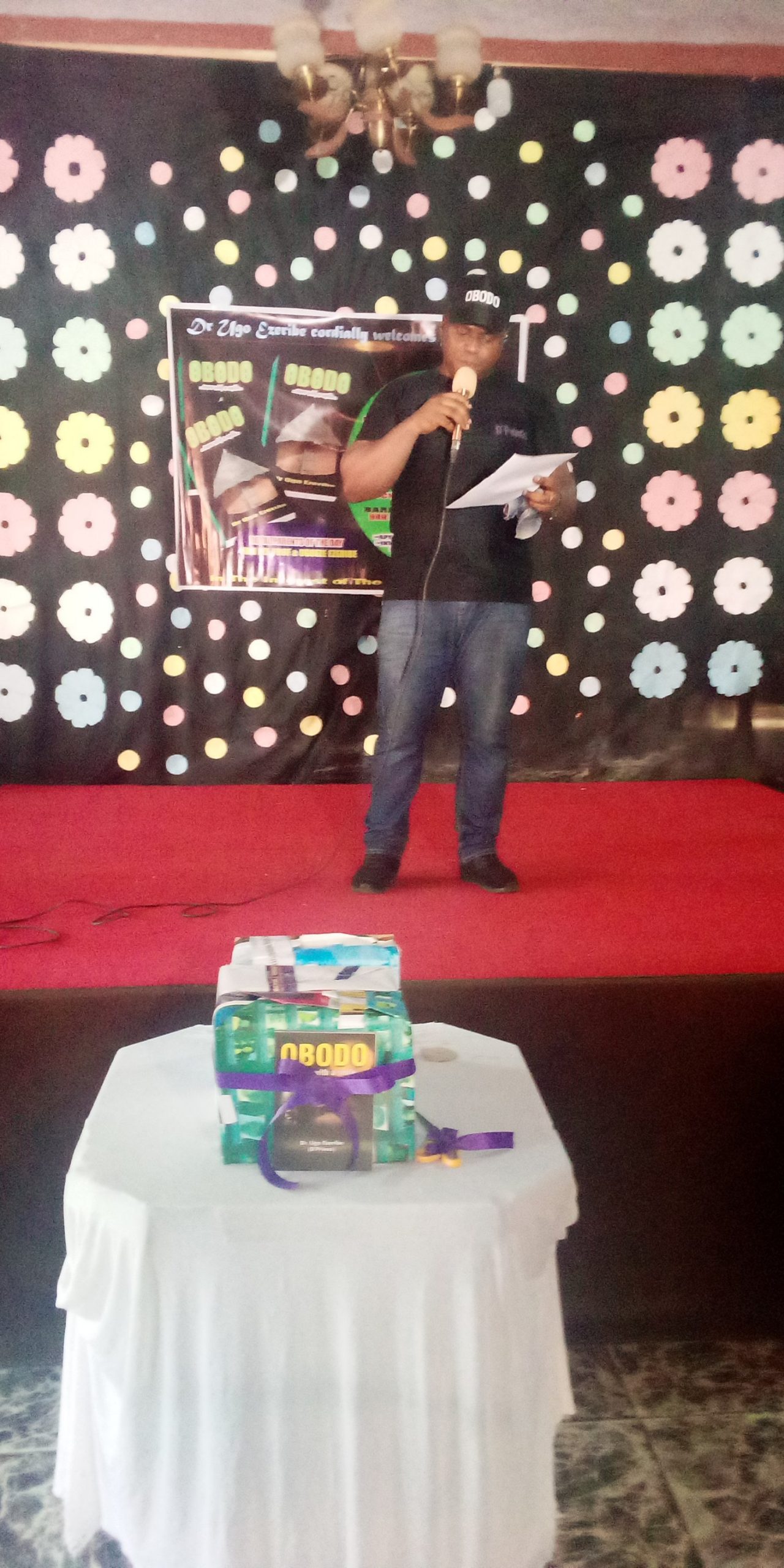 According to him, “gradually, life in the fast lane has taken over and academic is not really in consideration today. I am quite challenged now because we have people who have money in their pockets but nothing in their heads so I think I will blame the situation on the educational system.However, he pointed out that, “it may not just be the educational system only because if you look at the condition of the country, sometimes you may want to make ends and it may not come just quick via this educational pattern and I think some how, putting food on our table has taken over our mindset. So, I should blame the educational system”, he argued, as he charged all and sundry to arise and face the ugly situation squarely so as to restore the lost dignity.The epoch making event which had in attendance the member respresenting Ikwuano state Constituency in the Abia State House of Assembly and chairman of the occasion, Hon. Stanley Nwabuisi, the traditional ruler of Isiala Oboro, HRH Eze Prof. S.C Ezeribe, PDP chairmanship flag bearer in Ikwuano, Chief Steve Mpamugo, and other illustrious sons and daughters of the land. 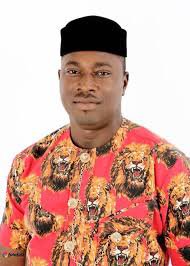 Highlight of the event was a display by Davidation 360 entertainment, Ikwuano which gave insight into how the country was robbed of her wealth by the Colonial Masters, who left them enslaved in their own land and a call for self-actualization. 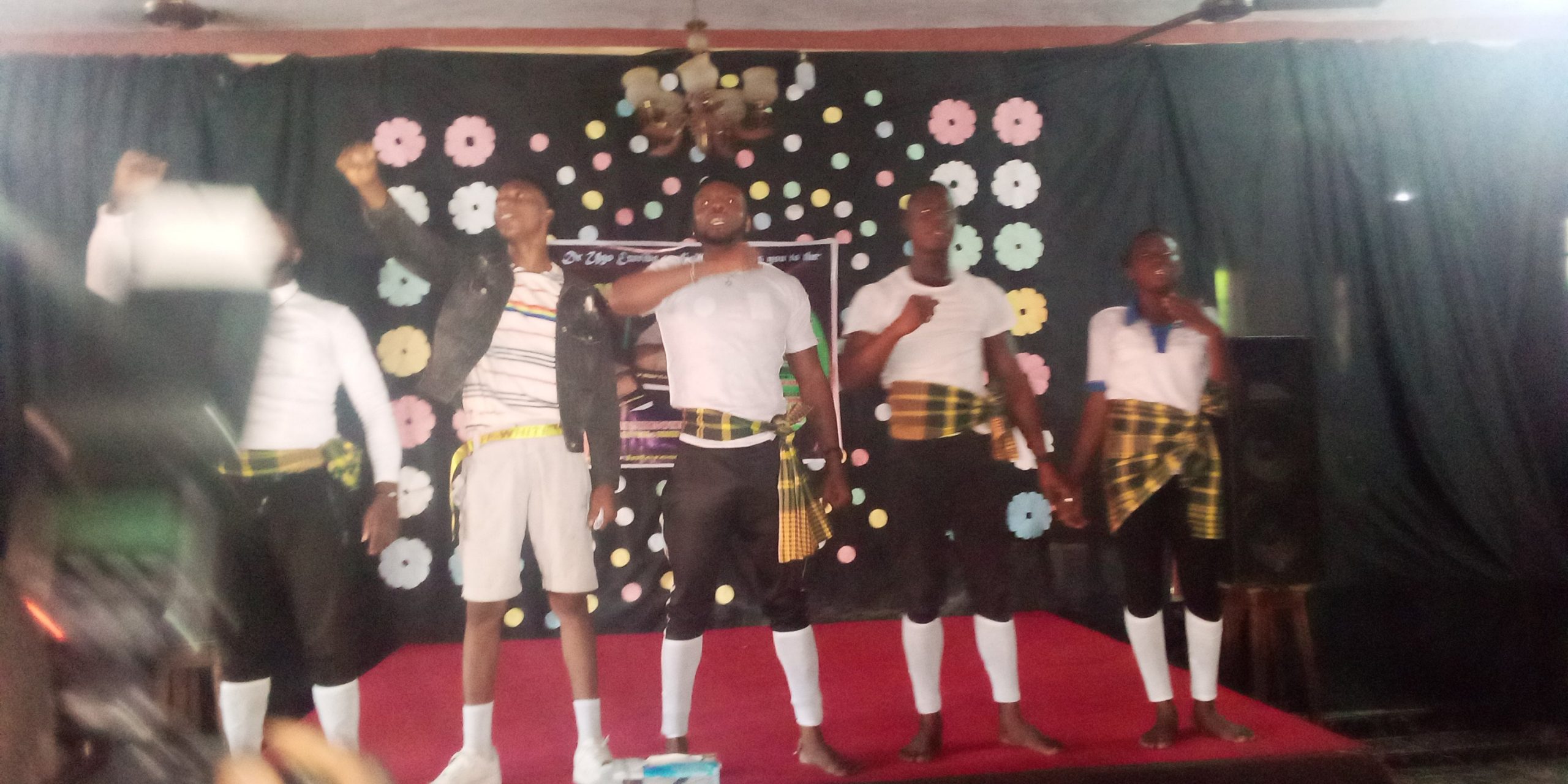 China calls for new talks with US after Biden win