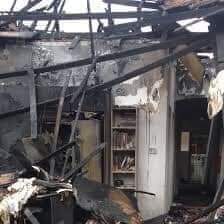 The Ohanaeze Youth Council, OYC- the apex youth organization in Igboland has sent a stern warning to the People Democratic Party(PDP) in Imo State, urging them to desist from blackmailing the governor of Imo State Sen. Hope Uzodinma “with imaginary RUGA settlement in Ugota that doesn’t exist anywhere.”

The National President of Ohanaeze Youth Council, Comrade Igboayaka O. Igboayaka, gave this warning today, Thursday October 14, in a press briefing in Owerri, the capital of Imo State, blaming it on “some political profiteers in the state,” as he described the information of RUGA in Ugota as baseless and unfounded.

Comrd. Igboayaka who vindicated the Governor, recalled that “during early last Month of September, a group of youths was deceived by PDP political actors in Imo State and Oguta with a political blackmail that Sen. Hope Uzodinma wants to establish Ruga in Ejemekwuru”, he said.

“It’s unfortunately that we are in a part of the world were people’s political interests are placed higher than the common interest of the people, therefore to these political profiteers, it’s better for one community to sink to pave way for political interest.

“The political gladiators in Ohaji/Egbema and Oguta axis through its leaders in the state should eschew bitterness because of loosing grip to power, and accept the reality that another political dispensation is coming.”

Meanwhile, the council appeal to the former Deputy Governor of Imo State Jerald Ironah to “stop hitting up with January 14, 2020 supreme court judgement and call the youths to order. Each youth in some quarter have some political Actors they listen to, therefore the peace of Ndi Imo is supreme to any persons interest at this time”, he added.

On Izombe clash, Comrade Igboayaka blamed the mayhem on the past administration of Sen. Rochas Okorocha whom he accused of misappropriation and embezzlement of Amnesty Grant during Awara Court Areas crisis.

“The divide and rule politics Rochas Okorocha played with leaders of the militants during the conflict resolution is also part of remote cause of Crisis in Izombe”, he stated.

He, however, reprimanded the Nigerian Army of unprofessionalism, hence the unleashed attack on poor innocent villagers over the killing of two soldiers during an altercation with the militants.

Hear him: “What played out between the militant gang and Nigeria Army was show of power. The Army’s approach at the level of the case between the two militant gangs was unprofessional. therefore it’s unethical that Nigeria Army poured their anger on the innocent villagers because of two of their colleagues that was killed. Igboayaka state.”

Igboayaka, therefore, charged community and religious leaders to always methodically observe and checkmate the illicit activities of some illegal youths’ groups in the area.

He amented that making blind eye to such activities would in no doubts, disrupt their peaceful existence and at the same time, jeopardize lives and property of inhabitants.

While applauding Sen. Hope Uzodinma for his immediate intervention, the youths’president Igboayaka O Igboayaka urged him to ensure that “the repost of the ‘Commission of Inquiry’ he constituted, should be implemented with human face by giving a justifiable compensation to the victims of the chaos as well as the people the Nigeria army made homeless as a result of the ugly incident.”