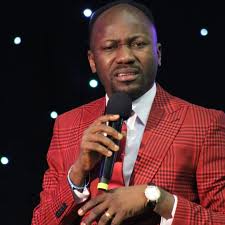 The Apex Socio-cultural youth group of the greatest Igbo race, Ohanaeze Youth Council led by Comrade Igboayaka O Igboayaka has described Pastor Suleiman of Omega Fire Ministry as an untrained “pastor” who lacks the ethics of the pulpit.

Speaking with news men at Sheraton Hotel Abuja, on Wednesday 20th April 2022, after a trending video on the Social Media wherein Pastor Johnson Suleiman described Ndigbo as shameless people, Igboayaka noted that “it has become a culture that when any untrained person want to trend the target will be on Ndigbo.”

He recounted that, “Johnson Suleiman has remained dumb since 2015 Fulani herdsmen, Bandits and Boko Haram insurgents have been terrorizing innocent Nigerians through their criminal activities, and have sent many Middle- Beltans home with countless IDP camps vandalized. Johnson Suleiman’s cowardice and timidity couldn’t allow him to summon courage to speak against the wanton killings going on in the country, but he can gather courage to insult the most entrepreneurial race in the world, Igboayaka stated.

The enraged Igbo youth leader recounted on how the self-acclaimed apostle broke away from Armour of God Church in Lagos State and launched his Omega Ministry, in his quest to exploit Christians

“Johnson Suleiman’s lack of Ministry training and quest to exploit christians made him break away from the Armour of God Church, in Lagos and started Omega Fire Ministries in 2004.

“It’s obvious that Johnson Suleiman is governed by pride of life, lust of the eyes and lust of the flesh, otherwise he couldn’t have mounted on pulpit with unspeakable ego to make a generalized statement that “Ndigbo are shameless”, Igboayaka blasted.

Without mincing words, Igboayaka reprimanded Suleiman, stressing that the latter should have concentrated on his purported ministerial work otherwise condemn the rising corruption and injustice ravaging the country.

He regretted that the present days believers were moved by what they see, hence their hunger for miracles and prophecies, adding that, “Nigeria is made of gang of pulpit looters and criminals”

In his words: “Pastor Johnson Suleiman if truly a man of God as he claims, he could have concentrated on preaching the gospel of love, condemn the injustice and corruption that’s ravaging Nigeria over the years, but unfortunately many assume that anyone who mounts the pulpit, quotes scriptures and does miracles automatically is a man of God. Nigeria is made of gang of pulpit looters and criminals who feed from the pockets of poor Nigerians.

“Pastor Johnson Suleiman as a native of Auchi in Edo State can’t look into the eyes of Gov. Goodwin Obaseki to call him a shameless criminal over the misappropriation and embezzlement of local government funds by Gov. Godwin Obaseki, an act that has kept Edo rural dwellers in abject poverty.

“Pastor Suleiman obviously belongs to the clique of Pastor and General Overseers who preach for their bellies, thereby making merchandise of the People.

“I challenge Johnson Suleiman today, if he be “a real man of God” with power of Holy Spirit, let him move without Police escorts, because Jesus Christ, Peter, Paul, Timothy, Silas and other Minister of God never moved around with government security guards in preaching the gospel.

“Pastor Suleiman should concentrate on running his Business centre with Church sign board at Auchi and allow Ndigbo with their God and destiny, Igboayaka ordered.