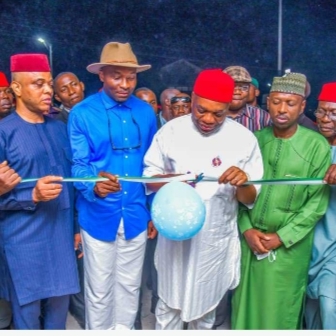 Residents of Bende LGA , in Abia-North were on Saturday thrilled with excitement following the commissioning of newly completed roads and a civic centre by the Senate Chief Whip, Senator Orji Uzor Kalu and the facilitator, Hon. Benjamin Kalu.

Amidst fanfare members of the Bende rallied in their large numbers to celebrate and witness the commissioning exercise. According to records this was the first time in history that the communities will have their roads tarred and well constructed since it’s  existence.

Prior to its construction, the road was in a deplorable condition, causing untold hardship to the community dwellers. A community stakeholder, the President-General Bende, Mr. Loveday Kalu recalled how motorists and road users  found it difficult to navigate the roads, most especially during the rainy season.

Overwhelmed with excitement , Mr. Loveday expressed his gratitude on behalf of the community to both Senator Kalu and Rep Benjamin Kalu describing their representation at the National Assembly as exceptional stating that Bende Federal constituency never had it this good.

Another resident in the community, Chinasa Okorie added that Rep. Benjamin Kalu is an answered prayer to the yearnings of Bende, emphasising that the House of Representatives spokesman has proven beyond reasonable doubt that he went to the National A with the interest of the people at heart.

He extolled both Senator Orji Kalu and Benjamin Kalu for working harmoniously to come to their aid to see that the road was constructed for their economic benefit.

Speaking during the commissioning, facilitator of the projects, Rep. Kalu appreciated the Senate Chief Whip who also hails from Bende LGA, for his role as a father and mentor through his sojourn in Politics.

The Spokesperson of the 9th House of Representatives disclosed that he achieved the completion of these and other projects as a result of heeding to the advice of Senator Orji Uzor Kalu, to hit the ground running from the very first day he assumed office, immediately after he won his election.

He said; ” Senator Orji Uzor Kalu remains my leader and mentor in Politics, what I am doing today is the result of what he taught me in Politics and I don’t fail to declare it publicly that he is my leader and Bug brother.

“He taught me that I should start working from the first day that I assume office immediately after the conclusion of the election and I was glad that I listened to him. He told me not to delay, not even for  one week or a month.

“It is on that basis that I invited him to commission these projects himself, Since Orji Kalu is the man who taught me the systematics of constructing roads for our community I invited him to cut the tape himself.

Just because the man standing beside me supported me and Bende to go to Abuja. Let me remind you that it was the same Orji Kalu that brought electricity power to our community. So what I am doing is following the footsteps of a great leader , a man in whom I am well pleased.

Rendering eulogies to Senator Orji Kalu , Hon. Benjamin disclosed that  he’s achievements in Bende were made possible as  a result of his loyalty to the Senate Chief Whip. He also stated that he’s election as a member of the House of Representatives was made possible through the Political backing of the former Governor. Benjamin also reminded the gathering that electrification of the community was built by Senator Orji Uzor Kalu during his tenure as Governor.

Accompanied  by the MD/CEO Nigerian Film Corporation, Dr. Chidia Maduekwe , Federal commissioner public complaints commission Dr. Maduka Ukaegbu the Chief Whip of the Senate,in his address commended Benjamin Kalu for a job well done. Kalu expressed that Benjamin Kalu has performed Excellently in delivering the dividends of democracy to the people of Bende, saying that he is pleased with him.

READ MORE:  Yuletide: Show Love To One Another, Prof. Greg Urges Abians
*As he Rolls out christmas package s

“Ben Kalu is my representative whom I’m very pleased with, because he has performed excellently well. The beauty of democracy is continuous improvement and Benjamin Kalu has proven that he is a forthright man who loves his people the same way I love them and I told him that he must work like me.

Speaking further Kalu said the various on going and completed projects in Bende and Abia-North at large was a payback to the people for voting massively for President Buhari and APC during the 2019 general elections.
Kalu pointed out that Abia-North was the zone in the entire Southeast and South South that President Buhari won convincingly. He reiterated that the zone remains the stronghold of the ruling All Progressive’s Congress (APC). Saying that himself and the Honourable members representing Bende and Isuikwuato/Umuneochi constituency belong to the same party enjoy distinct closeness to the Presidency as result of the massive support the party enjoys in the zone.

Kalu also urged the people to shun their negative attitude towards President Buhari, saying that the President Loves Igbos.

Earlier in his remark Benjamin Kalu said the ultra modern civic centre was constructed by himself and a fellow Kinsman Chief Acho for the people to have a place to hold events, meetings and other similar official and social gatherings. Also,The Senate Chief whip, Orji Kalu earlier added that the Town Hall will foster unity amongst the community, while commending Benjamin for the laudable initiative.