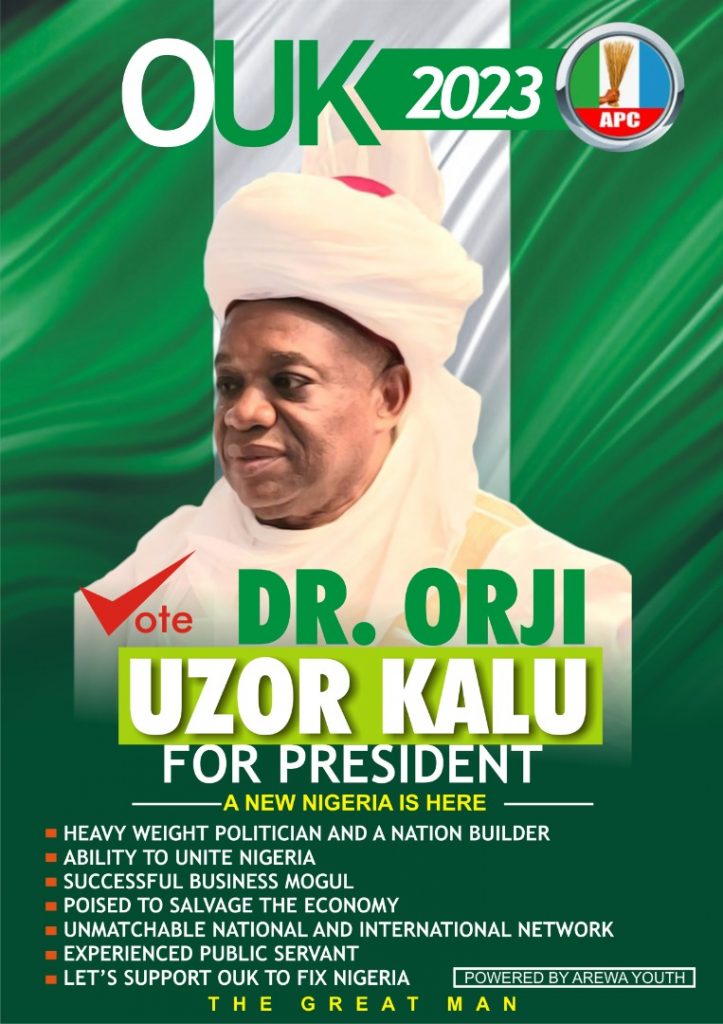 Few months after declaring support for a detrabilized Nigerian President who can unite the country and save the country from imminent disintegration,  Northern group, Arewa Youths for Orji Uzor Kalu, has made a bold statement by flooding posters of Orji Uzor Kalu for President.  The posters were sighted in Abuja , Kano , Umuahia, Aba, Enugu.

Kalu who is the Chief Whip of the Senate and former Governor of Abia state has been called upon by several Northern and Southern leaders , Civil  society groups and Youth groups to run for office of the president.  However,  Kalu has refused to heed to their call insisting that he is only interested in returning to the Senate .

Recall that the Northern youths after a rally held recently in Abuja made their position on  the 2023 presidential race . In a statement signed by her chieftains , The group called Kalu the best presidential material in 2023, urging the ruling All Progressive Congress to commence a process of adopting him as the sole candidate of the party.

They said: “This may sound odd in the eyes of Nigerians especially those nursing the intention to run for the number one seat in the land. Be that as it may, Senator Orji Uzor Kalu’s acceptability demonstrates the settled resolve of the youths in the 19 Northern states to support him succeed President Muhammadu Buhari.“Kalu is a result-oriented leader with a proven track record that can sustain and consolidate the gains recorded by the current administration.

“Kalu is the best bet for the APC in 2023. He is a  presidential material with experience in the private sector; executive and legislative arms of government.“It is imperative to state that, with Nigerians pushing for a President of South-East extraction, the stakeholders in APC need not look any further because the dutiful, and detribalised Orji Uzor Kalu is the right candidate for the party.

“His influence cuts across all the six-geopolitical zones in the country. Don’t forget he was the Chairman of Borno Water Board at the age of 25; Chairman of multinational companies and, a former Governor of Abia State.“We are totally convinced that what Nigeria needs right now is a courageous and vibrant  leader who is capable of managing a complex nation like Nigeria. That resourceful manager is Kalu.” the group said