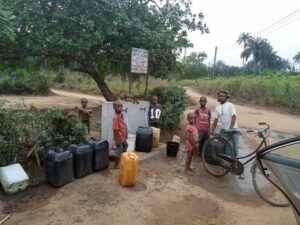 Describing the gesture as the first of it’s kind in the community, the President General of Amaugwu Uratta Development Union, Chief Emma Afonne thanked Sen Kalu for the project describing it as God sent which will go a long way in amelioration the hardship experienced by the people in accessing portable water.

Sen Kalu continues to touch lives of Nigerians across the country with laudable projects. More projects loading….. OUK is working!