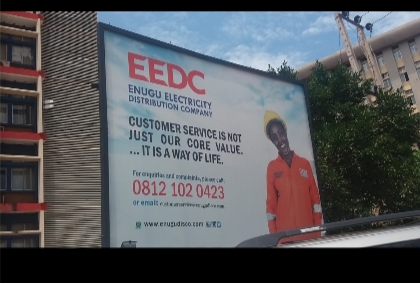 The Igbo apex youth body, Ohaneze Youth Council has condemned in totality, what it described as “corporate thievery and the unchecked extortion” of the Enugu Electricity Distribution Company EEDC as unfortunate.

Speaking to newsmen in Enugu on Thursday, September 2, the President of the youth body, Comrade Igboanyaka O. Igboanyaka lamented that the plight of Ndigbo in the hands of EEDC was long overdue for caution and redress of their injustice .

He stated that the body had received complaints from different towns and communities in the South East over what it called “the maltreatment of EEDC despite obvious darkness and non availability of electricity”.

According to the people oriented leader, “In Awa autonomous community, in Oguta Local Government Area of Imo State and all other town in the Local Government, for instance, EEDC believed that the Imo State Oil Producing Areas Development Commission, (ISOPADEC) pays for the communities and as such is a fat cow they can milk at will. The obvious reality is that the oil host communities pay their electricity bills even when EEDC has persistently denied the area electricity”, he pointed out.

Frowing at the deteriorating service delivery of EEDC in Awa, Igboanyaka, without fear or favour Express dissatisfaction with the present day Nigeria wherein he noted with dismay that “every part of the system has almost collapsed”

Speaking amidst worriment, Igboayaka argued that a community that scarcely enjoys electricity supply ought not to have bills as outrageous as millions of naira imposed on them.

The Igbo youth body, amid heartache, implored the federal government to “immediately declare a state of emergency on the power sector and sack those charged with responsibility to improve the sector if need be.

Hear him: “How can a community that does not enjoy electricity in a month get outrageous bills running into millions for no just sake? Several attempt by the past administration of ISOPADEC to ensure that EEDC lives up to its expectations failed. It should be noted that during the administration of Senator Rochas Okorocha EEDC cut off electricity in the oil rich local government for nearly eight years. The reason was the refusal of the state government and people of the area to continue paying bills without electricity.

“Without mincing words, Discos were giving licenses to improve the poor standard of electricity. Why should the federal government keep quite and allow Nigerians suffer without reviewing the activities and licenses of companies it gave freedom to play a major role in the power sector? He wondered.

Speaking further, Igboayaka reiterated that the agonies and penurious state of the citizenry should as a matter of urgency, give the President Muhammadu Buhari’s administration reasons to have sleepless nights, as he insisted that actions should be taken by the presidency to deal with areas of “smelling bad eggs that has continued to increase the suffering of Nigerians while few individuals keep getting richer.

“Also, on the proposed hike in electricity tariff slated for September 1, we want to ask; what is the rationale especially when past increases yielded no positive results that is visible to Nigerians? Notwithstanding the statistics of those who are in government about improvement in the power sector and all other sectors , The truth is that Nigerians should be the ones to clap for the government or slam it when necessary. The power sector has failed completely.

“Even in the FCT, the EEDC not only share distribution of electricity in some areas, the situation is worst in other areas. This situation is not different in all parts of Nigeria and the situation calls for serious concern as it has obviously contributed to frustrate the ease of doing businesses in Nigeria as well reduced the standard of living in Nigeria. The National Electricity Regulatory Commission (NERC) should realise that it owes Nigerians the statutory duty to ensure that the rights of Nigerians are protected in the hands of poor service delivery companies like EEDC”, he concluded.