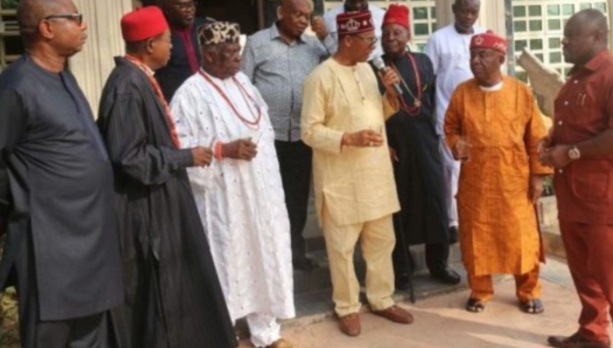 Dr Max Nduaguibe Sunday, the leader of Ukwa La Ngwa Elders’ Council, UNEC, has reiterated that all issues bothering their demand for Abia 2023 Governorship
are explicit and incontrovertible, hence they would not be overshadowed by partisan thuggery.

It is no longer news that there has been agitations on which senatorial zone would produce the next Governor of Abia State, to which the sitting Governor, Dr. Okezie Victor Ikpeazu has urged all to sheath their sword, reminding that his administration had not yet elapsed.

Reacting to the rising agitation, Dr. Nduaguibe insisted that the demand of Ukwa La Ngwa that the next Abia State Governor come from any of the Ngwa Local Government Areas of Isiala Ngwa-North, Isiala Ngwa-South and Osisioma, otherwise known as Umunne Ato Ngwa in Abia Central Senatorial District, in 2023, would not be eclipsed by partisan or administrative bullying.

In an exclusive interaction with famousreporters.com and dailyledger.com.ng at his Ntigha country home, in Isiala Ngwa-North LGA of Abia State, Dr Nduaguibe who utterly had refused to comment on the various reactions that accompanied the communique, as issued by Ukwa La Ngwa Elders’ Council, restating their demand, explaining that all issues as regards their demand are clear and incontrovertible

Hear him: “After the meeting of Ukwa La Ngwa Elders’ Council, I also appeared on a phone in radio programme where I exhaustively disected the basis of our demand.

” Our demand is based on Justice, Equity and Fairness, nobody could fault it and we are not going back on it.

“There is no reason to react to the various reactions from any quarter to our demand. But let me repeat that UNEC is purely a socio-cultural organization. We are non-partisan and accommodates all groups and shades of opinion in Ukwa La Ngwa, irrespective of political affiliations. We are grassroots-based and I do not know of any portion of the Constitution as amended that forbids us making any demand for the good of our community. We do not meet as a political group, but as a community-based group to discuss issues for the well being of our people. I do not see any form of bullying that can put an end to that”, he affirmed

It would be recalled that, UNEC, rising from a recent broadbased meeting stated in a communique amongst others: “That the good people of Ukwa La Ngwa, in pursuit of Justice, Equity and Fairness, knowing that the People of Old Bende have governed the State for an unbroken Sixteen Years, 1999 to 2015, unequivocally demand and insist that they will also Govern for Sixteen Consecutive Years, that is from 2015 to 2031;

READ MORE:  Abia LG Poll: We Shall Recover All We Lost, Steve Mpamugo Assures Ikwuano *As he receives Party's flag

“That, by virtue of Justice, Equity and Fairness, the People of Ukwa La Ngwa will collectively and ceaselessly work for the democratic enthronement of Abia State Governor of Ukwa La Ngwa Extraction, from any of the Three Ukwa La Ngwa Local Government Areas of Isiala Ngwa-North, Isialangwa-South and Osisioma, otherwise known as Umunne Ato Ngwa in Abia Central Senatorial District, in 2023”

Their demand has since raised the political temperature of the State attracting a press statement from the Governor, Dr Okezie Ikpeazu, who frowned at the contents of the communique. The ruling party, PDP further followed up and embargoed its members from attending meetings where zoning will be discussed, while political interests from Abia Norths argues that it is its turn to produce the governorship in 2023.