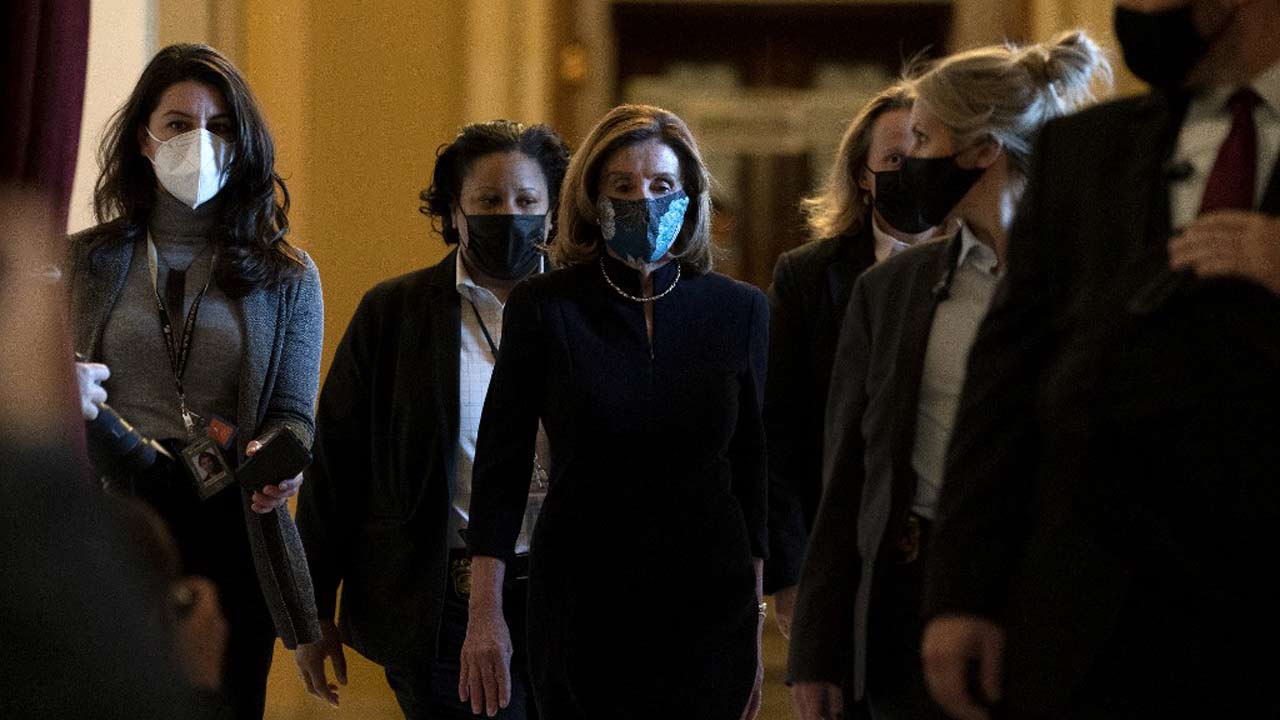 WASHINGTON, DC – JANUARY 13: Speaker of the House Nancy Pelosi (D-CA) (C), surrounded by a security detail, walks to her office from the House Floor at the U.S. Capitol on January 13, 2021 in Washington, DC. The House of Representatives is expected to vote to impeach President Donald Trump later today, after Vice President Mike Pence declined to use the 25th amendment to remove him from office after protestors breached the U.S. Capitol last week. Stefani Reynolds/Getty Images/AFP Stefani Reynolds / GETTY IMAGES NORTH AMERICA / Getty Images via AFP

He urged the Speaker of the House of Representatives, Nancy Pelosi and Congress to desist from actions that would further divide the country

The vote is expected to pass in the Democrat-led House, which would make him the first U.S. President to be impeached twice.

A growing number of Republicans have also voiced their support for impeachment, including senior House Republican, Liz Cheney but Republican Tom Cole urged others to vote against impeachment because it’s “flawed process” that will fuel divisions.

If Trump is impeached in the House, the Senate will then hold a trial. A two-thirds majority is required to convict him.

Pence’s stand is contained in a statement, released by the vice president following efforts by the House to impeach the President.

Trump is accused of inciting his supporters to storm the Capitol building at a speech before a violent riot kicked off last Wednesday. An impeachment would formally charge the President with inciting insurrection.

Pence said impeaching the president was not in the best interest of the nation or in line with the constitution.

“With just eight days left in the President’s term, you and the Democratic Caucus are demanding that the cabinet and I invoke the 25th Amendment. I do not believe such a course of action is in the best interest of our nation or consistent with our constitution. Last week, I did not yield to pressure to exert power beyond my constitutional authority to determine the outcome of the election, and I will not now yield to efforts in the House of Representatives to play political games at a time so serious in the life of our nation,” Pence said.

He further stressed that the 25th amendment, which the House relied on, was designed to deal with issues of incapacity or disability and not issues or comments that was not favourable as pointed out by Pelosi.

“As you know fully well, the 25th Amendment was designed to address presidential incapacity or disability. Just a few months ago, when you introduced legislation to create a 25th Amendment Commission, you said, “(a) President’s fitness for office must be determined by size and facts.” You said then that we must be ‘very respectful of not making a judgment on the basis of a comment or behaviour that we don’t like but based on a medical decision.’ Madam Speaker, you were right. Under our constitution, the 25th Amendment is not a means of punishment or usurpation. Invoking the 25th Amendment would set a terrible precedent,” he stated.

Pence added that after the events of last week, the administration’s energy was directed towards ensuring an orderly transition. He called for support to unite the country and lower the existing temperature.

What you need to know about the coronavirus...

Niger to reinforce military presence after over 100...