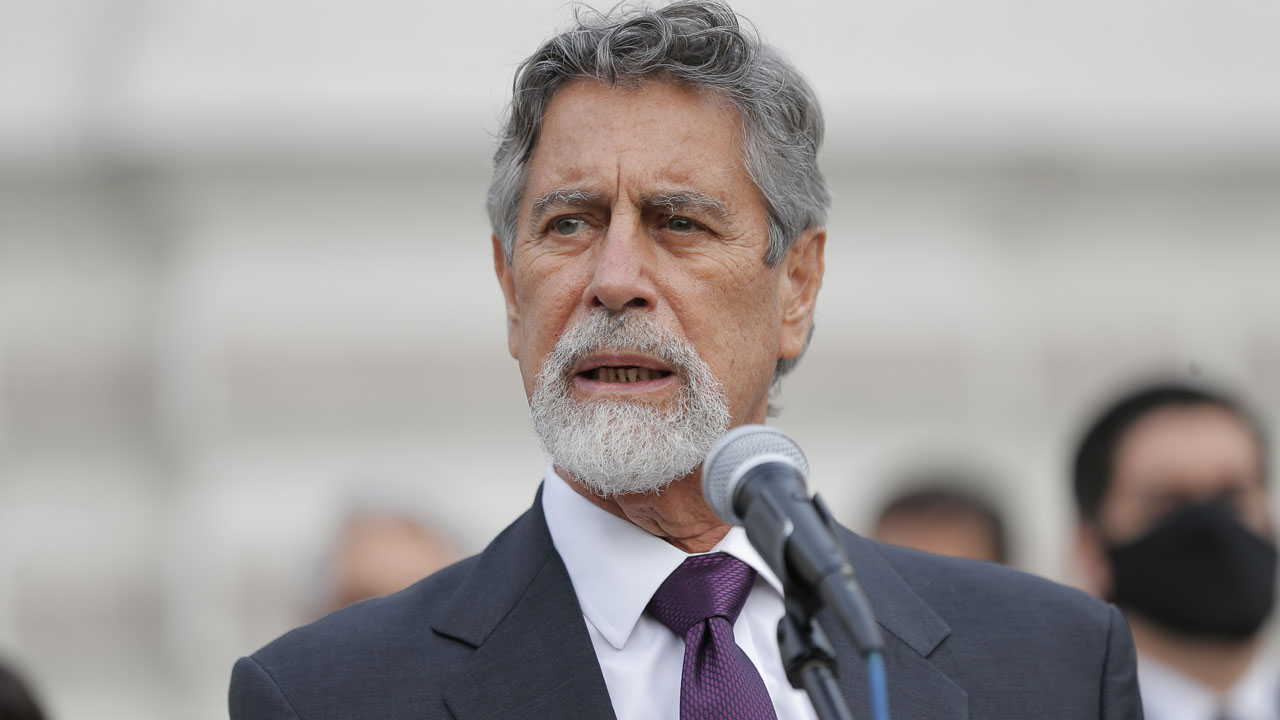 Peru’s congressman Francisco Sagasti speaks after being chosen as Peru’s interim President at the Congress in Lima, on November 16, 2020. – Peru’s Congress on Monday chose a 76-year-old former World Bank official as the South American country’s new president — the third in a rollercoaster week of political upheaval. (Photo by Luka GONZALES / AFP)

Francisco Sagasti was elected as lawmakers met to try to move on from a crippling political crisis, sparked by the impeachment of a popular president and the resignation of his controversial successor amid protests that killed two people.

Sagasti, from the centrist Morado party, will serve as interim president until the end of July 2021, completing the mandate of Martin Vizcarra, whose impeachment by Congress last Monday set off a snowballing crisis.

“What our country lacks at the moment is confidence. Trust us, we will act as we say,” Sagasti said before Congress.

“When a Peruvian dies, and even more so if he is young, it is all of Peru that mourns. And if he dies defending democracy, the mourning is aggravated by indignation,” he added, referring to the two protesters who died.

The gray-bearded former engineer is no political veteran, however, having been elected to Congress only in March this year.

He will be sworn in at a special congressional session on Tuesday.

His predecessor, former Congress speaker Manuel Merino, was forced to resign on Sunday after days of street protests culminated the day before in the death of two people.

As speaker of Congress, he was next in line, as the post of vice president was vacant.

Congress, half of whose members face criminal inquiries, remains deeply unpopular over its removal of Vizcarra.

Comments from Mirtha Vasquez, who was elected speaker of Congress in the same session, were clearly aimed at seeking to open a new chapter.

“I thank the population for all the effort. We regret the death of two citizens. This generation of young people has given us a lesson in how to redirect the destiny of the state,” Vasquez said.

Many in the streets opposed what they said was a parliamentary coup against Vizcarra, who won popular backing over pledges to root out entrenched corruption in Peruvian politics since assuming power in 2018.

However, he eventually fell afoul of opponents in Congress, where he lacked a party of his own, as well as a solid majority. Sagasti’s Morado party was the only one that voted against Vizcarra’s impeachment.

Second attempt
Monday’s meeting of Congress was its second attempt to agree on a president, and Sagasti was applauded by the session once he secured the minimum 60 votes required.

A consensus candidate, the political novice emerged after the legislature failed to agree in a first meeting Sunday on a leftist rival, Rocio Silva Santisteban.

Sagasti, nicknamed Don Quixote for his scraggy appearance, in the end won 97 of the 130 votes.

Among the first to congratulate him was Santisteban, who tweeted: “Don Quixote Sagasti is the new president of Peru! Now let’s work against corruption and the political crisis.”

Vizcarra also wished the new president well: “I congratulate Francisco Sagasti on his election as President of Parliament. Only a person with democratic principles will be able to face the difficult situation that the country is going through,” he tweeted.

Merino announced he was stepping down Sunday, following an ultimatum from Congress for him to quit or face censure. His announcement sparked loud celebrations in the streets of Lima.

Public prosecutors said Monday they have opened an investigation into Merino and his interior minister after police were condemned for brutally suppressing the protests.

They face investigation “for abuse of authority and intentional homicide” over the death of the two protesters, apparently from shotgun pellets fired by police, state prosecutor Zoraida Avalos said.

UN Secretary-General Antonio Guterres said in a statement he was “deeply disturbed” by the violent crackdown.

Vizcarra, 57, welcomed his rival’s resignation as the departure of a “dictatorship” from the presidential palace, having questioned the legality of his dismissal last week.

Despite Congress choosing Sagasti on Monday, there may yet be another twist in the tale, as Vizcarra has challenged his dismissal in the Constitutional Court and is still awaiting the ruling.

Some lawmakers questioned the wisdom of removing Vizcarra in the midst of the coronavirus pandemic and a crippling recession.

The pandemic has hit Peru hard, with the politically fragile country having the world’s highest per capita death rate — with nearly 35,000 fatalities — and GDP plunging more than 30 percent in the second quarter.

Vizcarra had broad support since succeeding Pedro Pablo Kuczynski, the former Wall Street banker who was forced to resign under threat of impeachment over corruption allegations in 2018.

Congress impeached and dismissed Vizcarra over allegations he took kickbacks from developers when he was governor of the Moquegua region in 2014, charges he denies.

Kobe Bryant to be inducted into Basketball Hall...