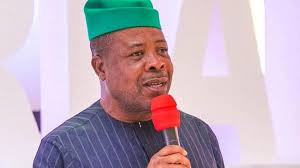 The national President Ohanaeze Youth Council, OYC Comrd. Igboayaka O Igboayaka, while reacting to the recent happenings in the nation, coupled with the counterresponse, charged Emeka Ihedioha to denounce “his selfish political interest” and embrace the collective interest of South-East and Ndigbo in general.

Addressing Newsmen in Enugu, on Monday, October 3, 2022, Comrade Igboayaka described the “acclaimed”, former Governor of Imo State, as an unrepentant political betrayer and Saboteur, lamenting that the latter could fight tooth and nail all in his bid to pull down Mr. Peter Obi to satisfy his principal, Alhaji Atiku Abubakar, a Northerner.

“Emeka Ihedioha has chosen the road of slavery than path of freedom, so in order to succeed in pulling down Peter Obi; It is a task he must carry out, to satisfy his master, the man he washes his pant in Sokoto. Emeka Ihedioha should earnestly quit from washing the pant of his political cronies in Sokoto and relocate back home to be part of ‘Take Back Nigeria Project’ led by Mr. Peter Obi.

“Emeka Ihedioha is playing politics with interest of Ndigbo, his apology is a mere make-believe to distract our attention”, he maintained, stressing that the incapacitation of Ihedioha in the State would serve as a deterrent to other saboteurs of the Igbo race.

“To this effect, therefore, the gift we must collectively give Emeka Ihedioha in Imo State is to make him politically redundant and orphan. So a person who sabotages Ndigbo must have learnt a historical lesson, and such lesson must be to send him to politically oblivion even if he had rigged the PDP’s primary election and became their flagbearer in 2023/2024 Imo Guber,” Igboayaka stated.

The Council, who also amidst dismay, unequivocally Emeka Ihedioha did not merit to pronounced as the winner of 2019 Imo Guber election that therefore warned PDP that giving Emeka Ihedioha their Guber ticket for 2023/2024 election is tantamount to failure.

It on record that Emeka Ihedioha has not won any election in Imo state from house of Representatives to Governor but has been using rigging both in Primary and general elections to secure all the positions he held.

It’s truism that the 2019 Imo Guber election was not in anyway won by Emeka Ihedioha, he rigged in the three local government in Mbaise, if he says otherwise I challenge him to produce the ballot papers of his vote from Ahiazu, Aboh, and Ezinihite Mbaise to see if it will correspond with the figure they presented to INEC.

“Within the constitutional frame-work Emeka Ihedioha did not merit INEC’s initial pronouncement of him as the winner of 2019 Imo Guber election. His purported winning was a function of both ballot rigging and financial inducement (he paid to have his way).Therefore, such has no moral justification to challenge Hope Uzodimma’s supreme court ruling. Unfortunately, we live in political system were kettle accuses pot of black color.

“But, unfortunately, we live in an entirely corrupt system, otherwise Uche Nwosu had majority of votes cast and constitutional spread, a thorough assembly of ballot papers and recounting can confirm this, but the “gods” and human in Imo was vehemently against him, due to the primitive loot and accumulation of wealth characterized with his In-law (Rochas Okorocha) administration, Igboayaka noted.

Comrade Igboayaka warned every Igbo politicians that want to be politically relevant or acceptable in Igbo land that doesn’t want to support Peter Obi to steer-clear from Mr. Peter Obi presidential project.