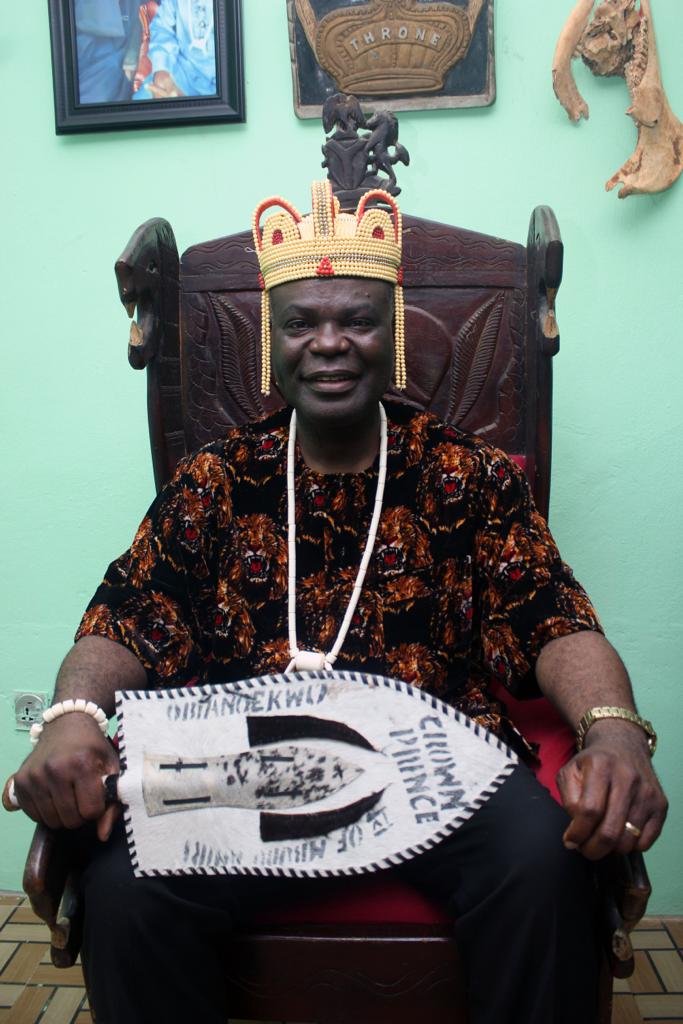 In the context of this discuss as it regards the subject of appointment by the Colonial Masters of persons as Warrant Chiefs and its implications in the traditional igbo society using the current Ezeship imbroglio in Mbubu-Amiri autonomous community in Oru East LGA Imo State, note should be taken that Igbo kingship institutions developed from three noteable sources.
The first is indigenous and ancient priesthood, which traditionally combined clerical and political duties of leaders in the village-based republics.

Monarchs or Ezes were recognized in Arochukwu, Awka,
Nri-Igbo, Owerri, Northern Nsukka and Ngwa: the most populous Igbo sub-group. In Ngwa, Josaiah Ndubuisi Wachuku was Eze from ancestral, royal lineage. Enugu-Ezike, Ovoko, and Iheakpu-Awka are home to the Igbo Eze communities. The King is variously referred to as Eze or Ezeikpe, depending on lineage.

According to an opposite view, the Eze of Nri in Anambra State influenced the constitution of the Benin Oba’s status. Differing points of view are focused particularly on the communities of Asaba in Delta State,  Onitsha in Anambra State and Oguta in Imo State. According to some scholars who argue against what is known as the Afikbo and Omenka Thesis on Origin, Igbo kings of these places trace the historical roots of their investiture immediately to the Oba of Benin. They tend to be called Obi as royal title of honour.

The third source of Igbo kingship is believed to be 19th and 20th century colonial rule by the British. Under a policy of indirect rule, the colonial administration created “warrant chiefs,” selecting recognised individuals to serve as administrators, rulers, judges and tax collectors. Native to their communities, warrant chiefs were usually selected from among those men who were most cooperative with the colonial administration, who were passionate about their people and of great sound mind and reputation.
After Nigeria gained its constitutional independencefrom Britain on Saturday October 1, 1960, many of those warrant chiefs maintained their status by seeking to recast their political roles.They clamoured to be among traditional rulers and were collectively retained by government of Independent Nigeria vis a vis Igbo Eastern Nigeria epecially in cases where there were no divergent views and stiff opposition.

The above naration has direct correlation with the current incident in Mbubu Amiri autonomous community in Oru East kingship tussle where the irreducible truth being that Ngwadom Okorie satisfied the Traditional “Aptitude Test” in that being from Amapu village and also Ngwadom family that calls itself first in Amapu village, he succeedingly became the Traditional Head of Amiri which in our igbo Traditional rulership system was refered to as Eze Amiri.

In his capacity and disposition as Eze Amiri, he presided over cases most profoundly proven by the official records with Ugwu Apali ( Orlu). His appointment as Warrant Chief sometime around 1912 empowered him to carry out judicial functions reserved for any Eze anywhere in the whole of Eastern Nigerian and his complementary roles as Warrant chief helped cement or seal his Ezeship roles.
To further buttress the fact that he was the Village Head who doubles as the Eze Mbubu Amiri, his all colleagues from the Nine(9) villages that made up Amiri clan namely :Ogbennaya Ikerioke; Amaokpara, Nwire Oloziriuwa; Nchoko, Obilom Okwudaa; Umuduru, Eleghasim Nwanjaba; Ugbeke, Nnadiawuke Orisakwe-;Mbubu, Ogbeama Irechukwu Ubahazu, Amaukwu Agwubuo;Amuka, Ojibe Esionwu; Umudioka,Agupuruonye Okoroji; Isiorie and Ogujiofo Durumbaegbu;Umuecheta.- due to his gravity and fearlessness these men appointed him, Eze Ngwadom Okorie, to represent the entire Amiri Clan when the Whitemen came. With this, it is safe and sacrosanct to add here that Eze Ngwadom Okorie was the first Eze of Amiri clan. This is archived and can be found at National Archive Enugu State.

There was harmony not until 1979 when Imo state government created State Council of Chiefs and demanded communities to present to it names of their Ezes. The entire Amiri gathered on the instance of Dr. Okechukwu Okibedi who just started his tenure as Deputy Speaker Imo State House of Assembly.There emerged for the first time controversies as to whom Amiri would send his name.

As of this moment, Sylvester Okafor was the chairman of Amiri Community Council, a position, the Grand father of Professor Ekelekamchukwu Ngwadom, Nathaniel Ibenyenwa Ngwadom appointed him to in 1977 in his powers and authority as the traditional head of Amiri community. The said Sylvester Okafor was nominated and his name sent as Eze Amiri. His name was subsequently gazetted to that effect. But prior to this exercise, Chief Elugwe Unagwu from Amuka had moved a motion to that Ngwadom should be sent to Owerri to represent Amiri. Chief Nicholas Oguejiofor from Umuecheta objected, with the claim that Umuecheta is the first son of Amiri. Chief Paul Ogbeama argued that Amiri should send one of their sons who has money as their representative. He acknowledged Eze Ngwadom as the Head of all Amiri chiefs, but added , he does not have money.

In his words, “we are tired of contributing money for projects in Amiri. We want an Amiri son who will be able to do things for us with his money when government calls upon us.” At the meeting which ended in a stalemate, he went ahead to nominate Sylvester Okafor a business man based in Onitsha. The chairman of Amiri Development Union (ADU) then , Mr.Gerald Ubazi adjourned the meeting to a particular day in July 1978 for possible truce. On that date, the ADU set up a Chieftaincy Committee which developed a new constitution that changed the Ezeship from being “Hereditary” to being “Rotational” but made the ten village heads as Hereditary or Permanent. For instance since Ubahazu has nominated Sylvester Okafor because he had money, they still left the Ogbeama family as hereditary because Ogbeama is one of the Ngwadom kingmakers.

Within these stretch of time, Sylvester was coming to Professor Ekelekamchukwu’s grandfather’s house telling him that he was not interested in contesting the Ezeship with him (i.e. Nathanial Ngwadom). He was said to have admonished him that if he was not interested why not step aside. Dr.Okechukwu
Okedibe former deputy speaker Imo House of Assembly, can attest to this event. The details were well captured in the book ” History of Amiri”, a book written by Ngwadom Ekele). It is never true that Nathaniel Ngwadom or anyone from their family voluntarily handed over the throne to anyone. The matter was unresolved. the Amiri chieftaincy committee retained the permanency of Ezeship in the ten villages as” Hereditary”. The copy of the 1978 Amiri constitution drafting committee which Chief Alphonsus Efelemegide Ngwadom the father of Prof. Ekelekamchukwu Ngwadom, was even signatory to.It is worthy to note that Ngwadom family has been the figure head of Mbubu people and for this has relentlessly and righteously, laid claim to the Ezeship of the Mbubu Amiri. If Amiri Chieftaincy Committee constitution recommendations means anything to Amiri people and the words of those elders can stand the test of time, the ‘Hereditary’ clause enshrined in that document for village heads in which Ngwadom is the one in Mbubu. Any argument of rotation in the newly created Mbubu Autonomous Community does not hold water. it is also a historical fact buttressing the immutable claims of the Ngwadoms of being the undisputed head of Amiri.In 2006, one of the uncle of Prof. Ekelekamchukwu Ngwadom had visited his father for the purpose of the Mbubu people applying for an autonomous community with Professor Ngwadom ‘s father as the traditional ruler. Cyril Ugochukwu Uzoukwu admitted he would not want to be Eze. He avowed his support to Alphonsus Ngwadom and bemoaned how Amiri people have been treating him(Alphonsus).His seemingly kind expressions only reminded Alphonsus Ngwadom the way and manners his father Chief Wilfred Uzoukwu supported his (Ngwadom’s) own father then. He( Ngwadom) suggested to them of the need to add Amaokpara to Mbubu to read Amambu autonomous community. Chief Stephen Ike and his brother Edwin Ikerioke were consulted. They agreed and stated that as far as Ngwadom shall be Eze, there won’t be any issue. A few people from Amaokpara raised objections demanding that it should be rotatory with Ngwadom being the Eze and that after he dies it will come to them. When they noticed that the arrangement did not go down well with Mbubu people who insisted on hereditary, they pulled out.

READ MORE:  Tragic story of how mom gets jailed as son dies home alone while she visited her boyfriend

Mbubu proceeded with the application for autonomy with Ngwadom as their Eze. Another argument emerged from within Mbubu that it should be rotational from family to family.Professor Ekele’s father, Ngwadom Alphonsus disagreed with them citing that Mbubu ezeship is hereditary and not rotational. This is evident when a titled man in Mbubu dies his son will take his place or succeed him ( I nochi agada Eze ya).
Ngwadom Alphonsus and his supporters from Mbubu successfully applied for an autonomous community which was granted in 2011.

Unfortunately on the day of presentation of the certificate, Eze Ngwadom was kidnapped by a group of people allegedly led by Mr. Charles Ndobi, forgetting that the certificate was aleady printed. Noticing that they couldn’t change the name, they went and re-applied with a non existent community “Mbutu Amiri” in Oru West local government area and Cyril U. Uzoukwu has been operating with that document as the Eze of that non existent community inside the authentic Mbubu- Amiri for more than Ten (10) years now until he was apprehended.

There is no record of Mbutu Amiri anywhere in Imo State and there should not be two monarchs in one community. I implore the Government and the security agencies, especially the police to do the needful and correct this abnormally to avoid the continued desecration of our culture, tradition and the promotion of forgery in our society. I believe the Imo State Government was deceived into recognising a non existing community last May 2011. The manipulation which can be described as forgery is being challenged in a competent court of jurisdiction .