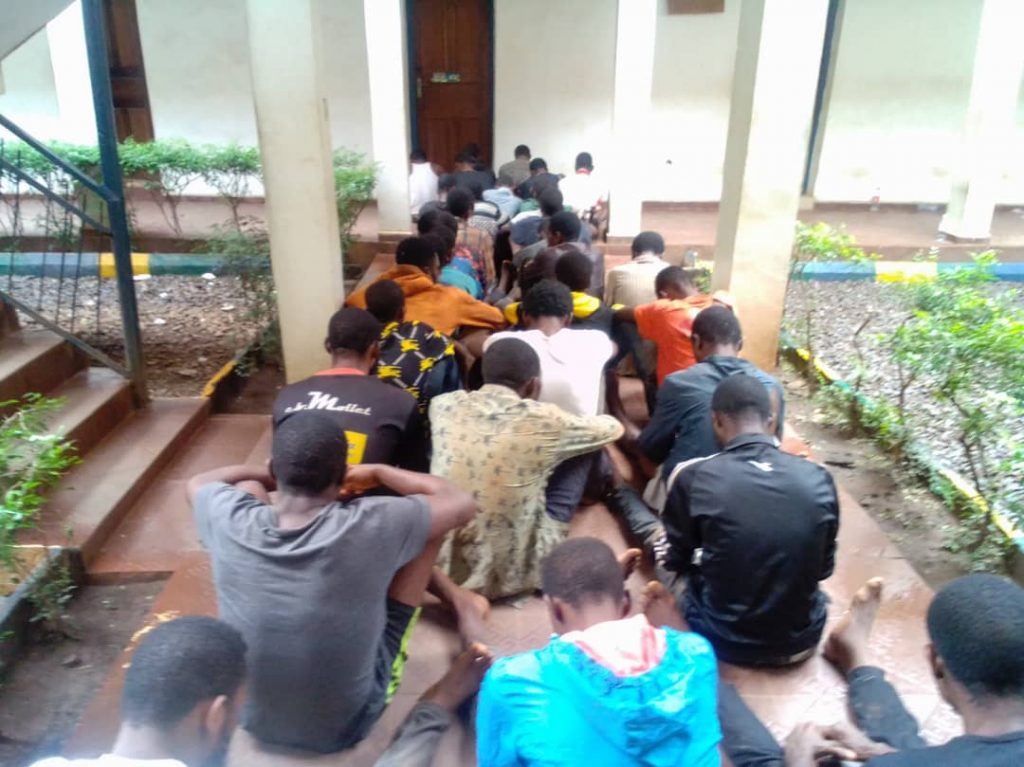 The Ebonyi State Command of the Nigerian Police Force, on Monday, paraded 60 suspected bandits, in the state.

According to the police, the suspected bandits were arrested on grounds of conspiracy, armed robbery, murder, arson, among other crimes. The police said they were responsible for attacks on police stations and killing of its personnel, in the state.

The Commissioner of Police in the state, CP Aliyu Garba, stated this while parading the suspects at the Command’s Headquarters, in Abakaliki, on Monday, saying rifles, live tortoise, charms, arms and ammunition were recovered from the suspected.

He noted that the hoodlums were also responsible for the destruction of facilities belonging to the Independent National Electoral Commission, in the state.

According to CP Garba, “At about 1830hrs of 23/5/2021, while acting on credible information suspected that the criminalw were meeting at Agubia Ikwo in the resident of one Ebube Ivom ‘m’ age 31years, their suspected Sector Commander. The said meeting had in attendance a Cross River State based native doctor (Ezemuo), who was invited to fortify members of the group with marks on different parts of their bodies, as antidotes to bullets in preparation to attack Onueke Divisional Headquarters and INEC office both in Ezza South Local Government Area of the State by 8:30pm of same day, 23th May, 2021.

“On the strength of the information, the command swiftly deployed team of Police Operatives in collaboration with Neighborhood watch of Ikwo, in the process thirty-nine male suspects, made up of indigenes of Ebonyi State and two non indigenes from neighboring Abia State were arrested and Large quantities of juju charms were recovered from them together with living creatures such as Tortoise and hawk.

“Eight of these suspects made useful statements to the Police, while one of them, Elom Daniel, ‘m’ age 17 years took Police Operatives to their hideout at Agbaja-Izzi community in Abakaliki Local Government Area of the State, where the owner of the house escaped leaving behind his wife and a child. Upon intensive search of the house/premises, the following items were recovered;

“Elom Daniel narrated that he specialised in drawing the map of any planned area to be attacked by the group before execution; he further admitted that the meeting at their State Sector commander’s resident was to attack Onueke Divisional Headquarters, INEC office and Ebube-Agu Security Outfit on the date mentioned above.

“Daniel further narrated that his gang were also responsible for the attack at Onueke Police Station on 8th January, 2021which claimed the lives of three Policemen and the attack on Nigeria Police Force Animal branch Personnel attached to Agricultural Quarantine checkpoint, along Donkey Market Ezzangbo in Ohaukwu L.G.A of the State on 23rd March, 2021 where two (2) Assault rifles were carted away by the hoodlums. The two rifles are among the recovered rifles.”