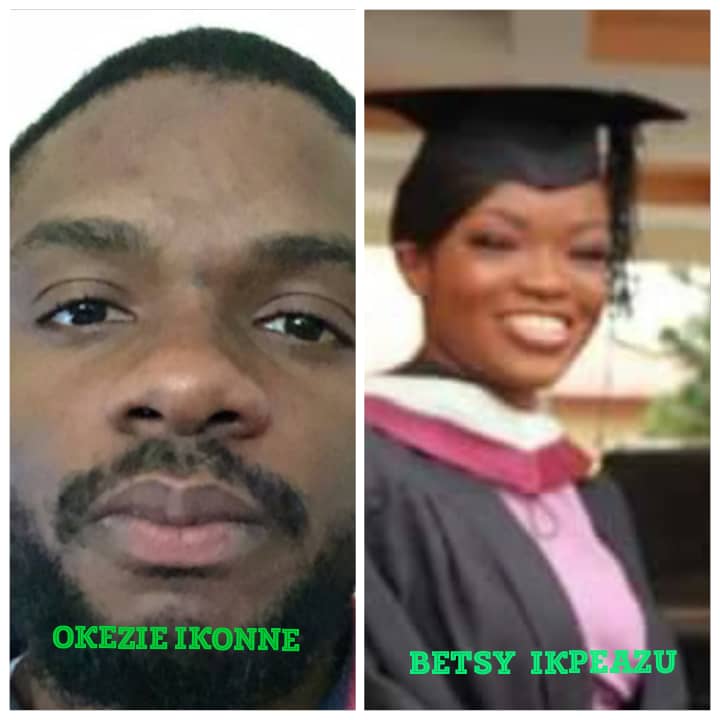 There are speculations hovering in the air that the daughter of the incumbent Governor of Abia State, Dr. Okezie Victor Ikpeazu, Betsy Ikpeazu has a ‘bun in her oven’ and fingers are pointed at the second son of Prof. Uche Ikonne as the father of the unborn child.

It would be recalled that the Governor had anointed the immediate past Vice Chancellor of Abia State University, Uturu, (ABSU), as his successor in the forthcoming 2023 gubernatorial election.

According to a post credited to Mezie Abia, the rumoured pregnancy has been concealed from the public’s recognition and has lasted for a period of four months. Although I don’t know the authenticity of this rumour.

Evidently, the present day’s Nigeria, women get pregnant out of wedlock and are being celebrated.

However, Mezie Abia stated clearly in his post that he is not kicking against the said pregnancy but merely worried about the welfare of Abia and her inhabitants.

Mezie Abia in his official Facebook handle had accused the incumbent Governor of hence turning the state into a family affair.

“Attempts To Conceal Ikpeazu’s Daughter Pregnant For Ikonne’s Son Bursted – Abia Government House Not A Love Gift For Anyone.

“Okezie Ikonne has been in the UK pursuing his doctoral program under TETFUND scholarship in statistics.

“I have no issue with any lady getting pregnant for anyone, my only interest here is about the governorship seat of Abia State which is a public office now being reduced to a love flower. I have assumed the position to discuss this issue as a public analyst because, this issue affects me directly as a citizen of Abia State.

“If governor Okezie Ikpeazu was not pushing to have the father of his daughter’s lover becoming Abia governor after him, I wouldn’t have been discussing this. But since they have decided to reduce an office as mighty as Abia governorship to a love flower, we would resist them, at least, for the love we have for our dear State.

“Now, back to the main issue.

“Betsy, governor Okezie Ikpeazu’s daughter was in an intimate relationship with Chike Ikonne, the first son of Uche Ikonne as far back as 2020;they were actually dating. The relationship was halted when Chike Ikonne played smart and got himself a wife from Osisioma LGA between December,2021 and January,2022. He did his traditional marriage on 22nd December,2021 and his white wedding on 5th January, 2022. Go and verify.

“The love batten was immediately transferred to his immediate younger brother, Okezie Ikonne who has been in the UK studying under scholarship. This transfer window opened around March/April of this year.

“As at today, Betsy is about 4 months pregnant for Okezie Ikonne and has been with the boy at the UK. Although, some insinuations have it that Chike has a hand in the pregnancy, but, I wouldn’t want to go there because, that does not affect me in any way.

“The both families have been trying so hard to hide and conceal this incident from the general public knowing how the news will ring in the minds of Abia citizens that Okezie Ikpeazu has been struggling to impose Uche Ikonne on.

“Now, as at 28th of August, Uche Ikonne was not in Abia State, he was in the UK, he went to the UK to see both his son and Ikpeazu’s daughter pregnant for his second son. He actually went with his first son to have a very secret meeting with Okezie and Betsy.

“The governor knew about this meeting as well because, even governor Ikpeazu who is an ordained elder in the Seventh-day Adventist Church and his wife a Deaconess of same denomination knows the implication of one being pregnant out of wedlock.

I would suggest that the Seventh-day Adventist Church writes its headquarters at the British Union Conference located at Stanborough Park, Watford, asking them to host a live interview with Betsy and Okezie. They would confirm everything I have just said in this piece, and by so doing, they can take adequate measures in accordance with the rules and doctrines of the church.

Politically, Abians can now see how Okezie Ikpeazu and his family have planned to pocket all of us for another 8 years. They now want to convert Abia governorship position to a love flower where one can rule and handover to his in-law at the detriment of the entire populace.

My duty is to carry out painstaking investigations and then bring my findings to the general public. You may even hate me for always saying the truth, but, it’s water off duck’s back.

More revelations to be dropped on this page. Share and recommend this page to anyone you know. We must get it right.

WHAT DO YOU THINK

Below is the link…

“Abia State is too big for anybody to hand over to his in-law. Abia is nobody’s family inheritance. Abia is not a love flower to be used as a reward for love making. We are practicing democracy and not in-lawcracy.

“They have turned both Emeka Omerua government guest house and the presidential lodge inside the Abia State government house into an overnight chalet.

“We can’t be risking the next eight years settling sexual and marital issues. Governorship position is not sexually transmitted.”