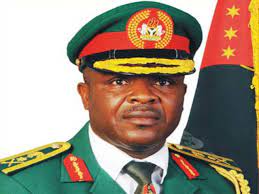 The Chancellor of Gregory University Uturu Prof Gregory Ibe has felicitated the former Chief of Staff of Nigerian Army General Azubuike Ihejirika on the occasion of his 66th birthday celebration.

Speaking through a goodwill message, which was made available to journalists in Umuahia recently, Prof Ibe paid glowing tributes to General Ihejirika, who according to him achieved the feat of attaining the enviable position of Chief of Army Staff at a relatively young age.

He described the former army czar as a thorough bred military officer who still has plenty to offer Nigeria, especially in the face of rising insecurity in the country.

In his words, “Emerging as Nigeria’s 22nd Chief of Army Staff in 2010 when the country was battling the menance of Boko Haram insurgency, General Ihejirika relied on his distinguished military background to confront the challenge headlong. His remarkable tenure also witnessed the novel introduction of Army Language Institute as a platform for increasing the capacity of our military personnel for foreign service. Though presently in retirement I believe the Nigeria army can still tap a lot from his rich experience, especially in the face of rising insecurity challenges”.

While congratulating General Ihejirika on what he described as his “safe ascension to the 66th floor”, Prof Ibe prayed God to continue to replenish, reinvigorate and strengthen him as he navigates his current sexagenarian years and ultimately grant him the grace of good health to march into the septuagenarian season.