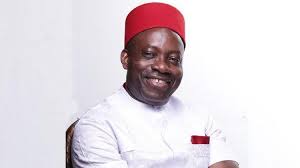 Chief Onuigbo described Soludo’s laudable victory as proof that the people still recognize excellence and are willing to enthrone it.

He said: “To whom much is given, much is also expected. I want you to remember that the people of Anambra State who have given their votes to you without batting an eye expect a deserving good governance in return.

The federal lawmaker applauded the people of Anambra State for choosing excellence, massively voting for the Governor-elect, and at the same time, ensuring that their votes counted, saying, “it is therefore, crystal clear that you are the people’s choice.”

Furthermore, he maintained that Soludo’s victory was a proof of true Democracy, as he urged the Governor-elect to against all odds, endeavour to deliver maximally the dividends of democracy to the state.

Meanwhile, Rep. Onuigbo commended the various security operatives for their display of professionalism during the gubernatorial poll, describing their performance as formidable, while also appealing to the people of Anambra to give the newly elected First Citizen of the state their unalloyed support to enable him drive the state to greater heights.

He enjoined other party members in the state to eschew all manner of acrimony but rather rally round the newly elected Governor in the spirit of sportsmanship, noting that “Soludo’s victory is the victory for all Anambrarians.

Odozi-Obodo, who expressed optimism in the credibility of the Governor-elect implored him to work assiduously towards ensuring the betterment of the state within his stay in office.

“I am confident that with your wealth of knowledge which you have garnered from your days in service as the Governor of Central Bank of Nigeria, your administration shall never leave the state at the same level wherein you met it.”

Continuing, he said: “I know that you have the capacity to manage effectively the economy of the state and I pray God Almighty to grant you the wisdom of King Solomon so that your administration shall leave a mark in the sands of time Congratulations, Professor Soludo, on your victory.”