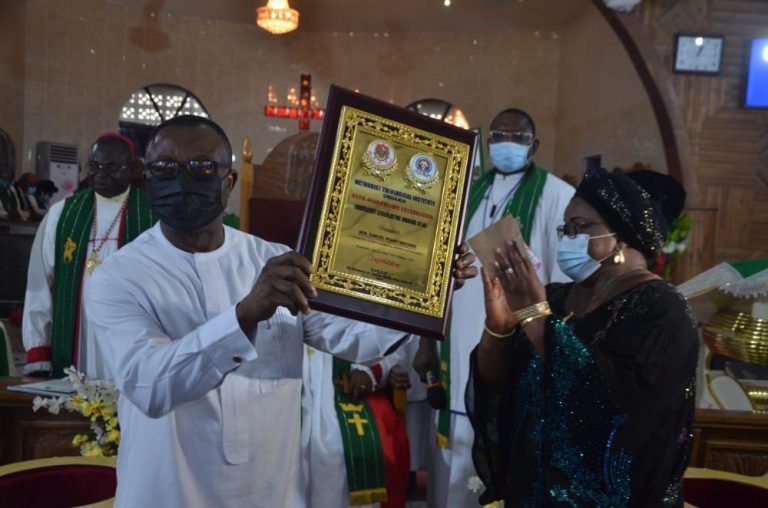 The award, which was presented to the federal lawmaker on Sunday, October 17,2021, during the 65th anniversary celebration of the institute, was in recognition of Rep. Onuigbo’s unparalleled representation for the people of Ikwuano/Umuahia North/South.

Recall that on October 13,2021, in a landmark action, the Senate had passed the Climate Change Bill which was sponsored by Rep. Onuigbo, to global acclaim. This was followed by the launch, at the National Assembly, of three research studies on REDD+,Natural Capital Accounting, and the Great Green Wall Initiative, on October 14, by the Global Legislators Organization for a Balanced Environment(GLOBE) under the leadership of Rep. Onuigbo. The studies, validated by the African Union and UN Stats, have been adopted as policy documents that will strengthen the legal frameworks for mitigating and adapting to climate change through nature-based solutions, while helping Nigeria sustainably develop.

READ MORE:  Do Not Relent in Being an Effective Representative— Methodist Bishop Tells Rep. Onuigbo

In addition, Rep. Onuigbo has consistently been effectively responsive to the needs of his constituents which has seen him build schools, provide electricity, train and empower his constituents, attract the construction of roads and water projects, among others.

Responding while receiving the award, in Umuahia, the Honourable Member expressed his gratitude to the institute for the award and re-affirmed his belief that awards must be earned and not bought. He promised to continue to work hard to serve his people as the award can only encourage him to do more.

The award was presented to Rep. Onuigbo by the Prelate of Methodist Church Nigeria, His Eminence, Dr. Samuel Emeka Kanu Uche JP.